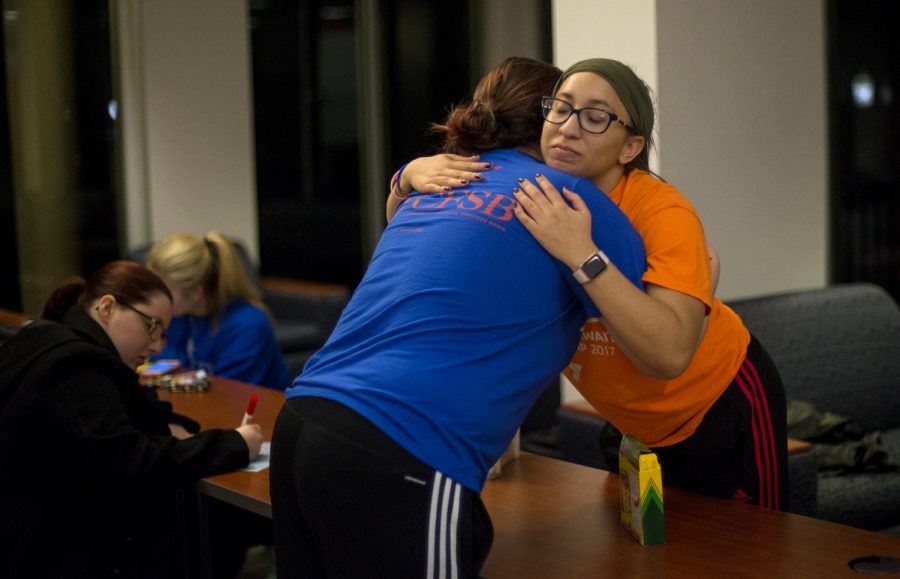 Rodes Harlin Hall R.A. Jordan Saunders (right), comforts Kenzlea Kaufman (left) after learning that her cousin, Bailey, was killed in the Marshall County High School shooting last week. Kaufman explained Bailey passed away on the scene of the shooting after pushing a friend out of the way of gunfire. "My cousin is one of those people that always had a smile on her face," Kaufman said. Saunders helped to organize an event where residents of Rodes were given the opportunity to write letters to students of Marshall County High. "I want to give back and do anything I can to help," Saunders said. "I don't want them to feel alone."

The Jan. 23 shooting resulted in the death of two 15-year-old students, Bailey Holt and Preston Cope. Several other students were injured.

The event in Rodes-Harlin aimed to send messages of support to the affected school and community. WKU students Breann Tucker and Jordan Saunders organized the event.

Tucker, who attended Marshall County High School for four years, said that the letters will broaden the community’s support network.

“There are only 1,100 people who go to [the school], so it’s a tight-knit community,” Tucker said. “Not only in the high school, but in the area. It’ll be a good thing when they receive these letters because they’ll know that not just our little community is behind them, but other people from WKU, other cities and states.”

WKU student Kenzlea Kaufman said she had already felt the support of the WKU community. Kaufman is the cousin of shooting victim Bailey Holt.

“I had a teacher send me a letter home to help give me support,” Kaufman said. “I had calls of encouragement. As soon as I came here, I was just surrounded by hugs.”

Kaufman said she also received encouragement from friends from her hometown.

“With it being a small community, you know pretty much everyone there,” Kaufman said. “Even before I knew about the incident, I had friends messaging me. That really helped me because it made me know that they were there for me, even though they knew it way before I did. I didn’t even have to say anything to them.”

Tucker, another Marshall County native, reflected on the lives of the victims.

“The people who were injured will be remembered by their gracious smiles, by their kindness,” Tucker said. “Everyone who talked to them said they had nothing bad to say, nothing negative to say. Always smiling, always laughing.”

Kaufman shared similar memories in honor of her cousin.

“My cousin, she’s one of those people that always had a smile on her face,” Kaufman said. “She always would be there for support. At the shooting, she pushed a friend out of the way when she saw the gun pointing towards them. She saved her life and took the bullet for her. She would have done that for anyone, even someone she never met.”

Kaufman said she believes her cousin is in a better place now.

“She has an old soul,” Kaufman said. “She loves classic rock. Whenever we think about her, we think that she’s up there listening to Def Leppard.”

Kaufman also addressed allegations that the suspect had been bullied.

“The person that did the shooting, it’s being said that he was bullied,” Kaufman said. “We’re not sure that that’s right. But if [Bailey] knew that he was suffering, then she would have done anything to be there for him.”

Kaufman, like the suspected shooter, was a member of the Marshall County High School band. She reflected positively on the influence its members had on her life.

“The band actually helped me get out of my shell and be who I am,” Kaufman said. “The [suspect] is also a member of the band. I want to make sure that [band members] know that they should not feel guilty for not noticing this from him; he could have not shown anyone. I know that if they knew something, they would have said something.”

Gatara Townsend, a freshman living in Rodes-Harlin, described her motivation for writing a letter.

“This is our way of letting them know that it’s okay if you feel like you can’t go on,” Townsend said. “It’s okay to cry. It’s okay to be fearful. You don’t have to be strong all the time, but it gets better. It’s going to get better. It’s going to continue to get better. This is a lesson for all of us. It’s a time for us to come together even more.”

Tucker echoed the sentiment that this event will bring her community closer.

“As a community we will grow stronger,” Tucker said. “We can help any other people who will or have already gone through this.”

Kaufman, who considered not attending the event, spent the night honoring her cousin.

“I contemplated on if I should go, because it is hard talking about it,” Kaufman said. “But I want people to know about the community, about Bailey and Preston. I’ve heard he’s an amazing kid. I just felt led to come in here, share with you all and make a letter of my own for the victims.”

Kaufman has also honored her cousin with a tattoo.

“I got a tattoo of pink carnations,” Kaufman said. “They stand for, ‘I’ll never forget you.’ I got them to remind me of her, and not just her, but all the victims of the shooting. I also got a little orange and blue ribbon for Marshall County.”

Kaufman hopes that others can learn from this tragedy.

“I encourage everyone to cherish every moment,” Kaufman said. “If something happens to a loved one, don’t feel regret that you could have talked to them more or that you should have gone out on this date to dinner or something. Just cherish every moment you have with them. Be like Bailey and be like Preston. Have a smile on your face and change people’s lives.”