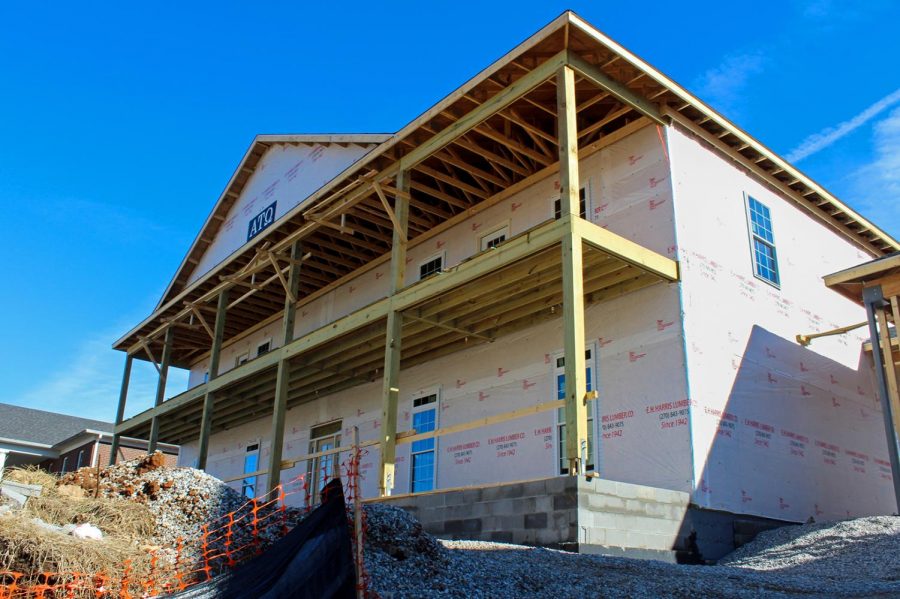 Construction continues on Alpha Tau Omega's new house on Center Street is set to completed summer of 2018. The house is being built on the same lot where the fraternity's apartments used to stand.

Fraternity Village will be gaining a new member this summer as the Alpha Tau Omega fraternity house moves closer to completion.

Over winter break, the house went from a concrete foundation to a wooden skeleton that is finally taking shape and is about 60 percent completed, ATO President Hunter Booher said.

Construction on the house broke ground June 1, 2017, beginning with deconstruction, and has been making progress since then. The development over winter break is the first time the house has taken its shape through mounted walls and spaces for windows and doors.

The new house will feature double-decker porches and large columns, and it will be located next to the Sigma Chi fraternity house on Center Street across from Midtown. This is the location of their former house, as they are rebuilding on the same lot.

“The thing I’m most excited for is the progress that our chapter has made: going from the old, rundown apartments to this house,” Booher said. “It has really boosted morale and we are all excited to see where our chapter can go.”

Though the development on the house will benefit the chapter in the long run, it has forced them to do recruitment elsewhere, especially during the past fall. During fall 2017 rush, ATO held their events in community spaces such as the Augenstein Alumni Center and High Tops.

“I’m very excited about the location of the house and the size and quality, but I’d say I’m most excited to see how much stronger the brotherhood will become within the chapter once we all have a place to call home and live together,” Alex Mallonee, chairman of recruitment, said.

From a newly-initiated point of view, new member David Johnson, a junior, says that though the house wasn’t the selling point for him rushing ATO this previous fall, it will help enhance the brotherhood.

“I think having the house will really propel us forward as a chapter, and hopefully help us grow and flourish into the chapter that we deserve to be,” Johnson said. “I’m really looking forward to just living with brothers from what I think is the most diverse fraternity on campus.”

For this year’s spring recruitment, Mallonee said the new housing shell will be a useful tool for recruitment this week, even if construction is still pulsing forward.

“The house is definitely a big step for us in recruitment,” Mallonee said. “We’re trying not to use it as a main selling point when talking to new interested members but it still has caught the eye of a lot more people nonetheless. During rush week, I have even coordinated an open tour of the house to anyone interested in rushing to help show off our progress.”

ATO was rechartered at WKU in 2012 and has grown in numbers since then. The house is due to be completed in June 2018 and will be open for fall recruitment 2018. For more information, WKU Alpha Tau Omega is on Twitter at @ATO_WKU.