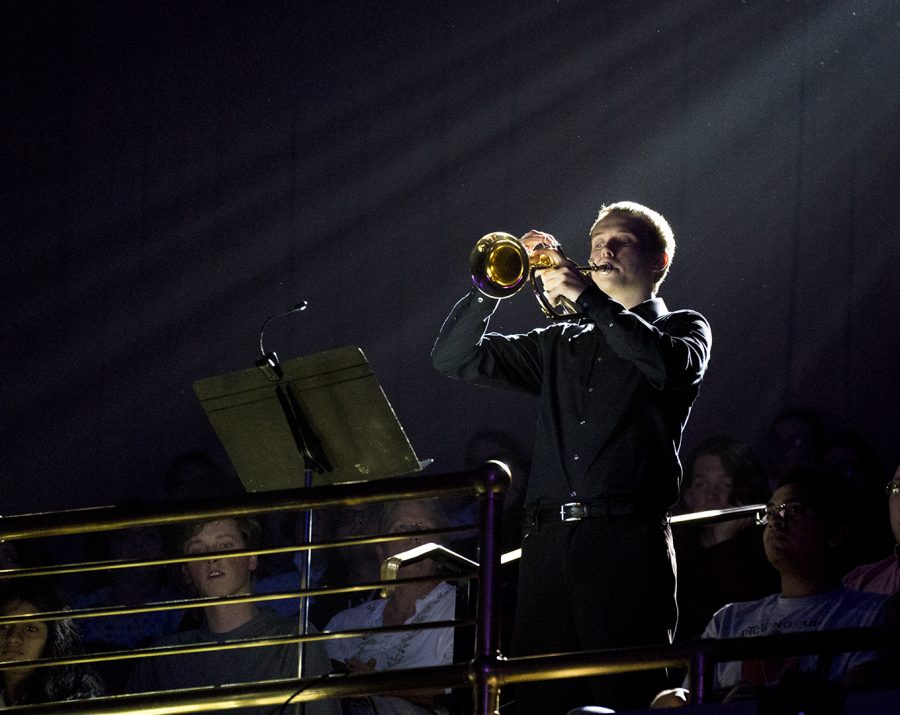 The 2018 PRISM concert starts with a bang as the WKU Wind Ensemble plays 'Land of Make Believe' on Jan. 26 in Van Meter Hall. This was the first of a total of 26 performances from WKU performing arts programs.

Illuminated by a purple light in the top corner of the balcony of Van Meter Hall, a French horn player began his piece of music, pulling the audience into an evening of music, color and precision.

Friday evening, hundreds of people flooded to Van Meter Hall to see one of the most anticipated concerts of the academic year. The 23rd Annual PRISM concert is a favorite of students, faculty and the Bowling Green community.

“This isn’t your typical concert,” said Gary Schallert, the coordinator of the concert. “The whole purpose of it is to showcase the department of music.”

Over 20 pieces were performed by groups within the choral, orchestra and band programs. Along with showcasing talents from across the music department, the PRISM concert put an emphasis on celebrating every instrument, musician and genre.

Immediately following the French horn fanfare, the magic and excitement of the concert began to take place. As the curtain rose, musicians started filling the stage, lightheartedly dancing to the beat and waving to the audience and their fellow band members. The audience responded by laughing and tapping their feet.

The transitions between performance groups were seamless. A light would fade, the curtain would fall, or an array of multicolored lights would be projected throughout the auditorium. Groups were not confined to the stage alone. They performed from many different corners of Van Meter Hall, giving the audience a more intimate experience and creating the “prism” effect.

Though many genres were showcased, it was structured in a way where nothing seemed out of place. One minute the WKU fight song was played, bringing the audience to their feet, only to move them to tears moments after with a vocal performance of “All I Ask of You” from “The Phantom of the Opera.”

“We take great pride, and we have fun,” Schallert said. “There’s little surprises that happen during the concert. People come and they laugh. They’ll be laughing one minute and the next minute they may be totally exhilarated by an up-tempo jazz chart … it’s unlike all other concerts on campus.”

The lights were striking, but it was the professionalism, stage presence and passion of the performers that really made the concert such a success.

The musicians involved started preparing for the PRISM concert as early as the fall semester. Though they put in many months of hard work, the performers made it look easy. They approached the stage with confidence and delivered an excellent performance.

“Magical” was the word Scottsville sophomore J.T. Davis used to describe the concert.

WKU hosts the High School Honors Band Clinic the same weekend that the PRISM concert is held. This gives the high school participants a chance to experience a part of the university’s band program. Davis participated in the Honors Band when he was in high school and recalls the PRISM concert being a key part of why he chose to study music at WKU. Now years later, Davis performed in the concert and helped to organize it.

“So many components make up the PRISM concert,” Davis said. “All the kids know is that it’s something magical — it’s something that will blow your mind. Being on this side, being on the back, it’s quite an extraordinary feat.”

The PRISM concert was lively and engaging, and it served as a celebration of all things music. Whether it was through the music itself, the fun props, the lighting effects or the musician jokes, the PRISM concert brought the community together through the love of music.