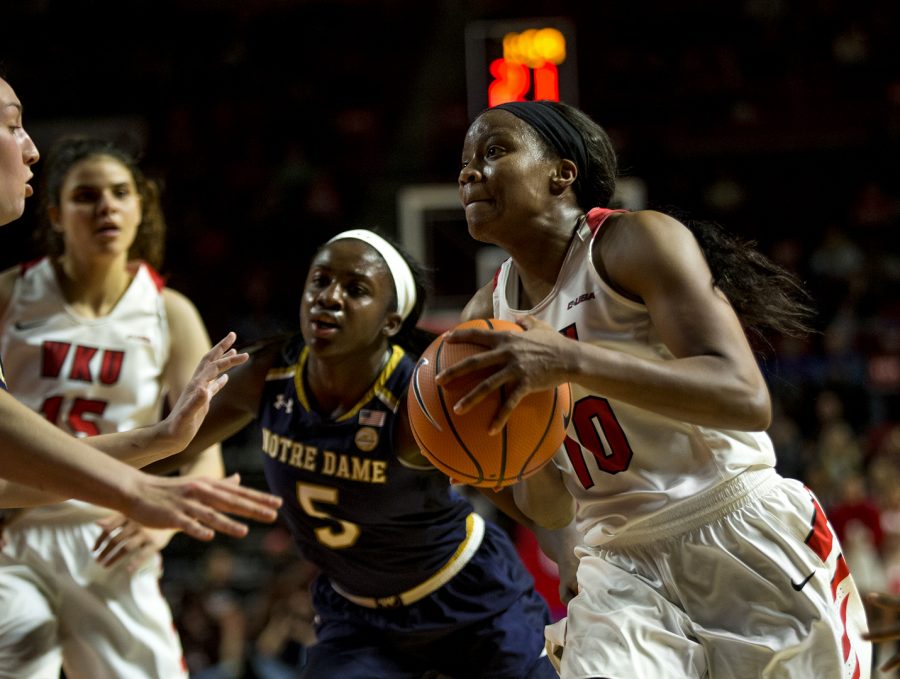 In a battle of premier offense versus premier defense, the offense took the victory, as the WKU women’s basketball team defeated North Texas 79-65.

The Lady Toppers (15-5, 6-1 Conference USA) traveled to Benton, Texas, Friday night to take on North Texas in the second game of a three game road trip and came out with an easy win. The Mean Green were a little short-handed as their second-leading scorer Lauren Holmes did not play.

North Texas got out to a 5-0 lead to start the game, but the Lady Toppers quickly took control and took an 11-9 lead on an Ivy Brown 3-pointer that gave WKU a lead it would never surrender.

North Texas came in as the third-best team in the nation in opponent points per game, allowing 52.9 points per game. WKU is 33rd in the country at scoring offense. The Lady Toppers scored their 53rd point with 3:22 to play in the third quarter, topping North Texas’ average scoring allowed early. Tashia Brown led that offensive attack with 28 points on 9-of-26 shooting, her 15th 20-point game of the year.

After WKU found itself trailing to start the game, it was Ivy Brown who answered the call and got the team rolling, She scored 10 of her 16 points in the first quarter. WKU finished the quarter on a 21-8 run to give them a 21-13 first quarter lead.

WKU turned it up defensivey, as they only allowed 11 second quarter points and forced 16 first half turnovers, more than North Texas’ season average of 14 per game. The defense led to offense as WKU scored 19 points in the second quarter to give them a 40-24 lead at the break.

North Texas again came out of the break on a 7-0 run to cut the Lady Toppers’ lead down to nine, but WKU answered with a 14-4 run to get the lead back up to 19. WKU ended the quarter with a 23-10 run in to take a 22-point lead into the fourth quarter.

WKU was outscored 24-16 in the fourth quarter, but still rolled to the 14-point victory. Tashia Brown would added four rebounds and two assists to go along with her 28 points, and went 10-of-11 from the free-throw line. Ivy Brown pulled down six boards to go along with her 16 points. WKU forced 21 turnovers from the Mean Green and held them to just 52 shot attempts, compared to WKU’s 67.

WKU will finish up its three game road trip against Louisiana Tech (13-7, 4-3) Sunday afternoon at 2 p.m.