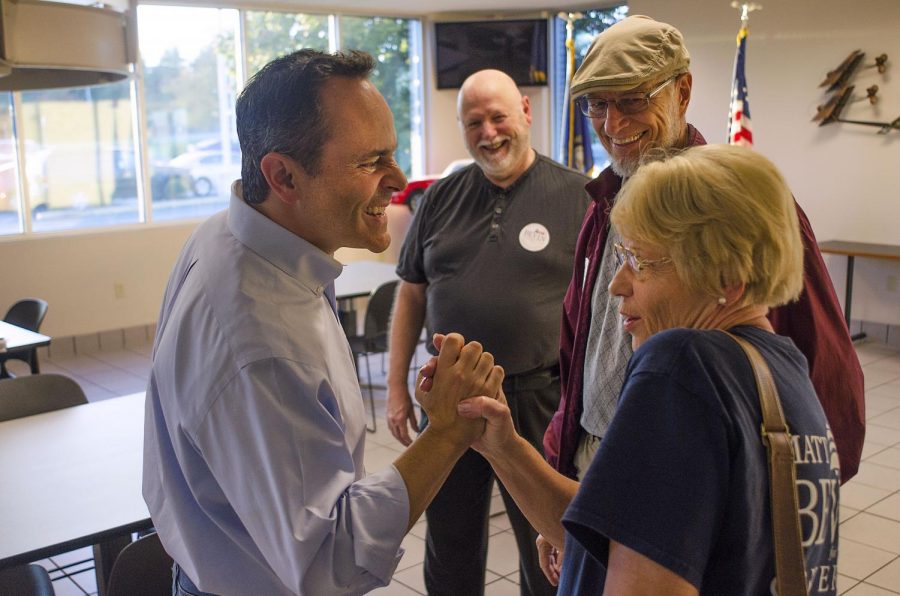 Gubernatorial candidate Matt Bevin (R-Ky) talks with supporters after a small rally in the Bowling Green-Warren County Regional Airport. Despite lagging in the polls, Bevin said that he remained confident in his party's ability to win key offices in the states government. Andrew Livesay/HERALD

Gov. Matt Bevin proposed a two-year state budget for Kentucky that would eliminate 70 programs throughout the state and would cut spending by 6.25 percent. Additionally, Bevin said the budget would fully fund the state pension system.

The statewide spending cuts would result in a loss of $4.6 million for WKU, according to a statement from President Timothy Caboni.

“The real budget focus this year is getting our financial house is in order,” Bevin said.

Caboni’s statement also said WKU is “planning for an increased pension obligation of nearly $9 million,” and acknowledged the proposed cuts to Kentucky Mesonet.

“We recognize that the proposed cuts could have been much higher,” Caboni said. “For WKU, the overall proposal presents us with an even bigger fiscal challenge because it adds significantly to the $15 million in reductions the University’s Budget Council is currently working to address.”

Caboni said WKU would be working with legislators during the legislative session.

“It’s important to understand that this is the beginning of the legislative process,” Caboni said. “We will work diligently with policy makers throughout the session to advocate for a more positive final outcome for higher education and WKU.”

Part of the 6.25 percent spending reduction means cutting 70 programs throughout the state, Bevin said. The Herald-Leader reported that Kentucky Mesonet, a statewide weather monitoring network being developed at WKU, is one of the programs that will no longer be funded.

“Something has to give, where does this money come from?” Bevin said.

He said the proposed budget “is a realistic budget” and is “not wishful thinking,” in order to balance finances in the state.

During his address, Bevin also addressed the state pension crisis, saying the pension system would be fully funded.

“The one thing I want to make clear to you is we are going to fund our pension system 100 percent,” Bevin said.

Bevin said $1.1 billion would be going into the pension system, in order to fully fund “what is actually owed.”

Last semester, WKU administrators began looking at alternate options for pension in light of the state budget crisis. An option discussed was using 403(b) plans.

The proposed budget also includes a $300 million “asset preservation bond pool” in order to “preserve and upgrade facilities owned by the Commonwealth,” according to the Herald-Leader. Universities would have access to these funds.

Caboni said WKU is “appreciative of the inclusion of asset preservation funds to support our infrastructure challenges,” and those funds will be studied further.

Bevin also said that all lottery proceeds would continue to go to student scholarships.

“The people agreed to that lottery under the assumption that monies would be going to that purpose,” Bevin said of the lottery money.

[email protected] is giving the State of the Commonwealth and Budget Address tonight in a few minutes. Follow this thread as we live tweet the address.You can watch it live here: https://t.co/DnhHFNPyeq

[email protected] sent out an email last September about the implications changes in the state pension system could have on WKU. https://t.co/ZsApLoHuTB https://t.co/LGSMLjYZPY

Lottery money will go to students, he says. Additional money is going into a workforce bond pool

Herald-Leader reporting that Bevin’s budget gives no funding to the @kymesonet which is housed at WKU. https://t.co/a4DlI0vZaz https://t.co/duRa67tBFu

The story has been updated to include comment from President Timothy Caboni.