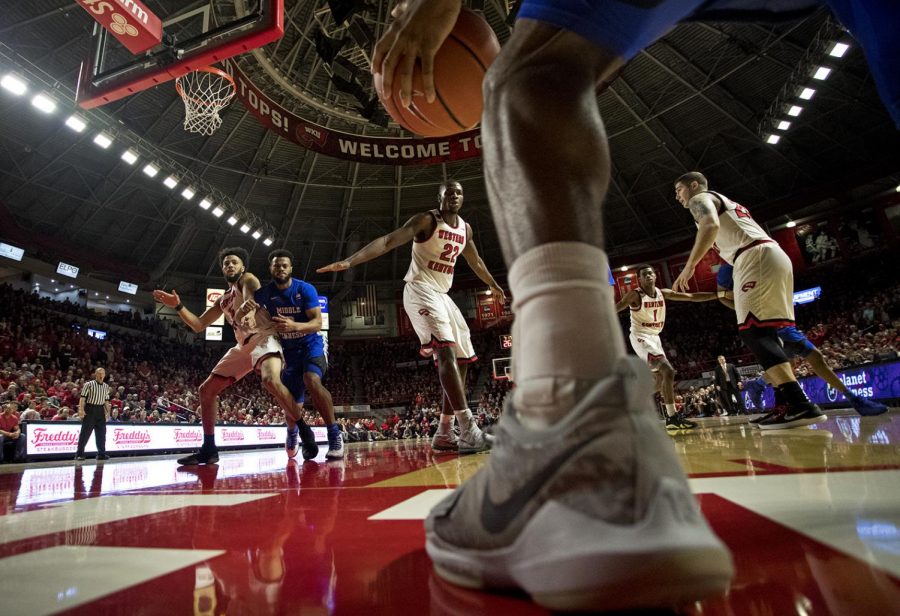 “One stat that jumps out to me is turnovers. We had 15 turnovers tonight,” WKU head coach Rick Stansbury said. “In the second half we shot 52 percent compared to their 44 percent. You wouldn’t have thought that watching the game. The difference is they got eight more shot attempts than we do because of self-inflicted turnovers. We dribbled it off our foot several different times and had some lazy passes. In games like these you can’t have those.”

There was little separation between the teams from the start. Back-to-back buckets from Johnson and Coleby got WKU out to a 4-0 lead, but the two teams traded buckets for the next several minutes and went into the first media timeout with WKU up 8-7. A Hollingsworth three-point play helped WKU push their lead up to four at 11-7, but MTSU wouldn’t let the lead get any bigger. The Hilltoppers pushed the lead to four again when Coleby finished an alley-oop and drew a foul, but he’d miss the free throw and WKU’s lead remained four points at 17-13.

Down the stretch of the first half the Hilltoppers went on a scoring drought of nearly four minutes. MTSU would use that drought to help go on a 10-1 run that would give the Blue Raiders a 27-20 lead. MTSU’s Nick King hit two free throws late in the half, giving him a game high 12 points at halftime, and giving MTSU a 29-22 lead going into the locker room.

The Hilltoppers and Blue Raiders went blow for blow all the way up to the 6:18 mark of the 2nd half. Graduate transfer guard Darius Thompson, the Hilltoppers’ leading scorer at 15.3 Points per game, finally put his name on the scoring sheet with two free throws to make the score 53-48 in favor of MTSU. After a bucket by MTSU guard David Simmons, junior guard Lamonte Bearden and Coleby hit back-to-back buckets to cut the deficit to 55-52, forcing a Blue Raider timeout. For the first time since the first half it was a one-possession game. Trailing by three with 3:43 to play, Johnson appeared to be giving King fits on the perimeter. Johnson forced King to lose the ball, but King gathered and threw up a 3-pointer that went in right before the shot clock expired to put MTSU back up by six.

“I tipped it away from him and he hit a tough shot,” Johnson said. “I thought ‘What more could you do?’ You forced him to bobble it and he pulls up and hits one in your face. He had a great night and was one of those guys that the basket looked pretty big to him.”

The Hilltoppers cut the score to 60-58 with under a minute to go. WKU needed a stop and on the following possession King missed a layup, but MTSU’s Brandon Walters stormed in and grabbed the ball and dunked it to make it a two-possession game with time winding down. Freshman guard Taveion Hollingsworth stormed down the court and scored a quick bucket while getting fouled. Hollingsworth hit the free throw to cut the lead to one with six seconds to play.

MTSU’s Giddy Potts answered with two free throws to make it a three point game with five seconds to play. MTSU head coach Kermit Davis elected to foul immediately instead of taking the chance of the Hilltoppers tying it. Bearden hit the first and missed the second. The Blue Raiders rebounded, and MTSU guard Tyrik Dixon hit two free throws to clinch the MTSU victory.

The Hilltoppers are back in action next Saturday against Marshall (14-6, 5-2 C-USA). WKU defeated the Thundering Herd 112-87 earlier this season. WKU is now tied with MTSU and Old Dominion at 6-1 atop the C-USA standings.

“They’ll be a totally different team and a totally different game,” Stansbury said of Marshall. “They really like to spread you out. We played about as well as we could’ve played that night at their place. We’ve got to bounce back and get ready for them.”