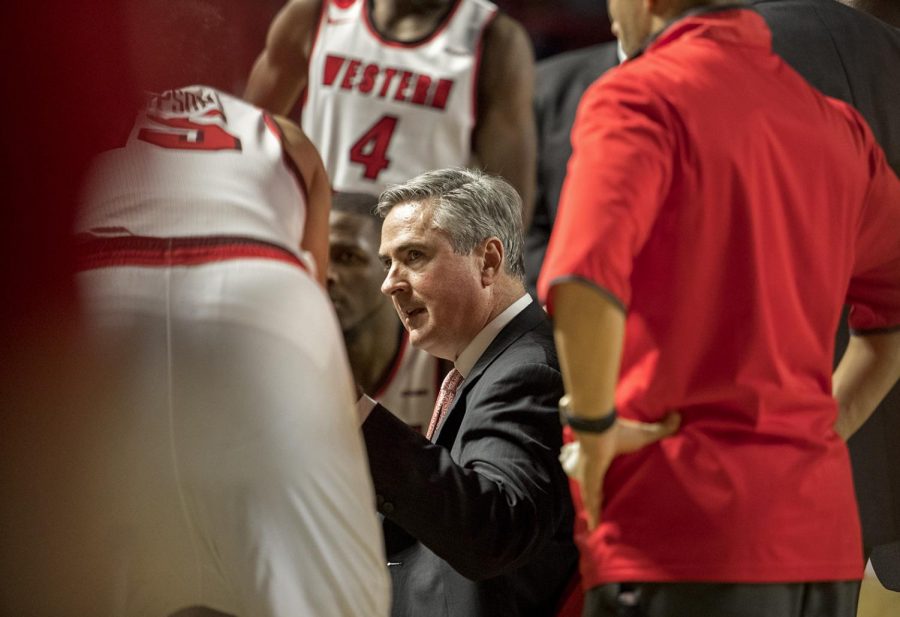 WKU head coach Rick Stansbury gives instructions to his team during the their game vs. MTSU on Saturday January 20, 2018 in E.A. Diddle Arena. Stansbury's annual salary was increased by $150,000 due to his recent success and the generosity of the Hilltopper Athletic Foundation.

After less than two seasons at the helm of the WKU men’s basketball team, head coach Rick Stansbury had a $150,000 raise approved by the WKU Board of Regents Executive Committee in a meeting on Friday.

Stansbury, a Battletown, Kentucky native, has led the team to a 29-23 record thus far, with the team off to a 14-6 start this year, including a 6-1 record in conference play. In the season prior to Stansbury’s hiring, WKU went 18-16 (8-10 Conference USA).

“When we hired [Stansbury] in March of 2016, it was an incredibly challenging time for our program,” athletic director Todd Stewart said to the Board of Regents Friday. “From a roster standpoint, we literally had seven players, only five were healthy, only three played the season before and we had zero scholarship guards. That’s where our roster was. Probably one of the most challenging, if not the most challenging, roster situation in the country.”

The contract also includes a 5 percent bonus if the team has an academic progress rate of +940, and 5 percent again at +970.

“The year before we hired Rick our APR was an 880, so that’s not good, to put it mildly,” Stewart said. “Last year, the first full season under Rick Stansbury, it improved to 979.”

With Stansbury’s new base salary, each of these bonuses would come out to be $32,500.

“I’d like to thank the Board, President Caboni and Director of Athletics Todd Stewart for their commitment to me and our basketball program,” Stansbury said in a press release from the school. “The timing is not ideal, but this is a way for me to show commitment back to the university. My total focus is on this basketball team and putting them in the best position possible to compete for a championship.”

This is a proactive move, Stewart said, to give Stansbury a raise in the middle of the season rather than at the end. All of the funding for Stansbury’s raise is coming from the Hilltopper Athletic Foundation, and none of it will come from the athletics budget or state funding, Stewart said.

Approval of the funding for the raise had been previously voted on and was approved unanimously, according to HAF executive board member Craig Browning

With the Hilltoppers rising in wins and recruiting rankings, Diddle Arena has seen a rise in attendance.

For the first time since the 2008-2009 season, average attendance in Diddle Arena for men’s basketball games could eclipse the 5,000 mark, with that number currently sitting at 4,791 after last Saturday’s sell out against Middle Tennessee.

Larger crowds are an incentive for Stansbury as well, as his contract states that he receives half of gross ticket revenues over $800,000.

“There’s no question that there’s excitement around the program,” Browning said on behalf of the foundation at the Board of Regents meeting. “Objectively we can look at attendance, we can look at wins, we can look at exposure on a national stage, and all of those things are very clear facts. We do believe that a strong athletic program is a great window for the university. There’s a great value in the branding.”

In agreement with his raise, Stansbury agreed to increase his buyout to $1 million if he decides to leave WKU to coach at another school, Stewart said. The school that hires Stansbury away from WKU would owe the university that $1 million, Stewart said.