WKU accepts invitation to the Cure Bowl vs Georgia State 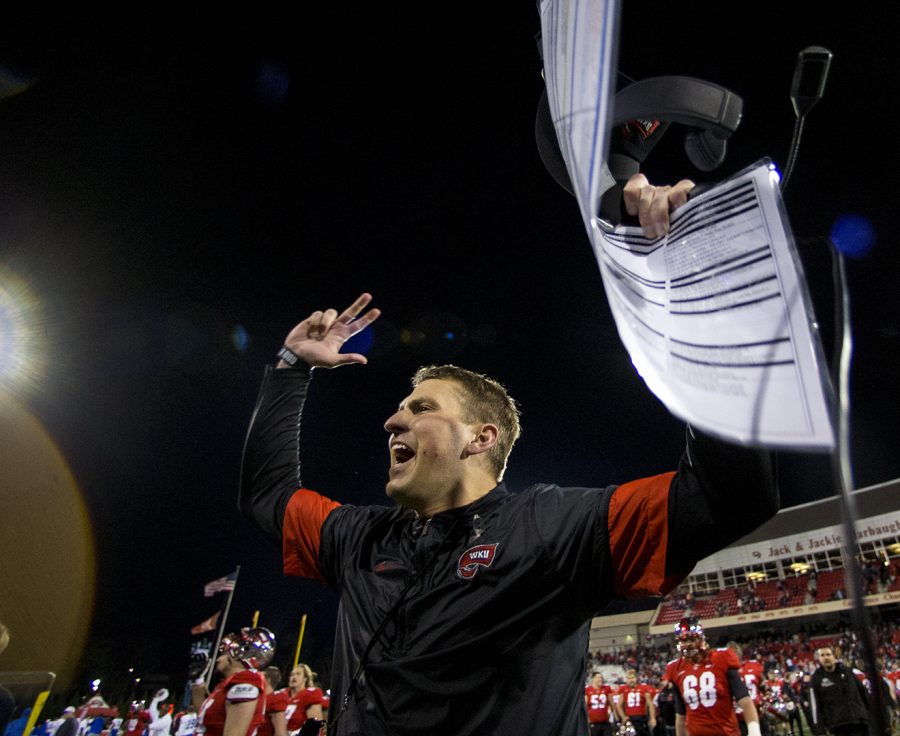 For the fourth consecutive season, the Western Kentucky football team will be playing in a bowl game south of the Kentucky border. The Hilltoppers (6-6) will take on Georgia State (6-5) in the third annual AutoNation Cure Bowl on Dec. 16 in Orlando, Florida. WKU joins Clemson, Virginia Tech, Louisiana Tech, Utah, Georgia, Wisconsin and Stanford as the only teams in college football with an opportunity to win a fourth straight bowl game.

“Your goal, when you start every year, is to reach postseason play,” WKU Athletic Director Todd Stewart said. “We are certainly thrilled to be at the Cure Bowl in Orlando. I’d like to thank the Conference USA because the Cure Bowl was not one of the main Conference USA bowls and so for the league office to secure a backup agreement to get us in a bowl game, along with two other at-large teams, I think its a great day for the conference. We’re certainly excited for the opportunity we have.”

With 10 bowl eligible teams and only six guaranteed bowl tie-ins, Stewart, along with the conference, had to fight to secure back up bowl spots to ensure WKU would get their shot at one extra postseason game.

“Bowls certainly want to know what kind of team you have and what kind of fan base you have,” Stewart continued. “What I tried to point out was that we have a very unusual streak right now. There’s only eight teams playing in a bowl game this year that have won a bowl game each of the past three years, so we bring some postseason winning momentum. We’ve also traveled well the last two bowl games. I think the fact that we’ve traveled really well to Miami and Boca Raton played into it.”

Stewart also mentioned having redshirt senior quarterback Mike White, an NFL prospect, was another selling point. White will look to lead this year’s senior class to their 38th win, including their sixth overall postseason win. At 333 passing yards per game, WKU is ranked No. 9 nationally in passing offense while White leads C-USA passers in yards (3,826), completion percentage (65.6), completions (342) and passing yards per game (318.8). He is also the conference’s leader in total offense (300.3) for the second consecutive season.

The game also features two rookie head coaches as both Mike Sanford and Georgia State’s Shawn Elliot are in their debut season at the helm of their respective programs. It will be the second time in three years GSU has played in the Cure Bowl, having lost to San Jose State 27-16 in 2015. As for WKU, the Hilltoppers will be playing in a bowl game in the state of Florida for the third consecutive season.

“If you’re not going to a New Year’s 6 bowl, you think about destination,” Sanford said. “This is a phenomenal destination. The team hotel for both teams is at Universal Studios in Orlando. That’s a great bowl for our players to experience. It’s also a great place for WKU fans to travel to since there’s plenty of direct flights from Nashville into Orlando.”

Tickets for the 2017 AutoNation Cure Bowl can be purchased through the WKU Ticket Office this week from 8 a.m.-5 p.m. or online at WKUTickets.com. Tickets are $25 and $50, depending on location, and the deadline to order tickets to insure priority seating will be Wednesday Dec. 5 at 5:00pm. Tickets will be available to purchase until game day.