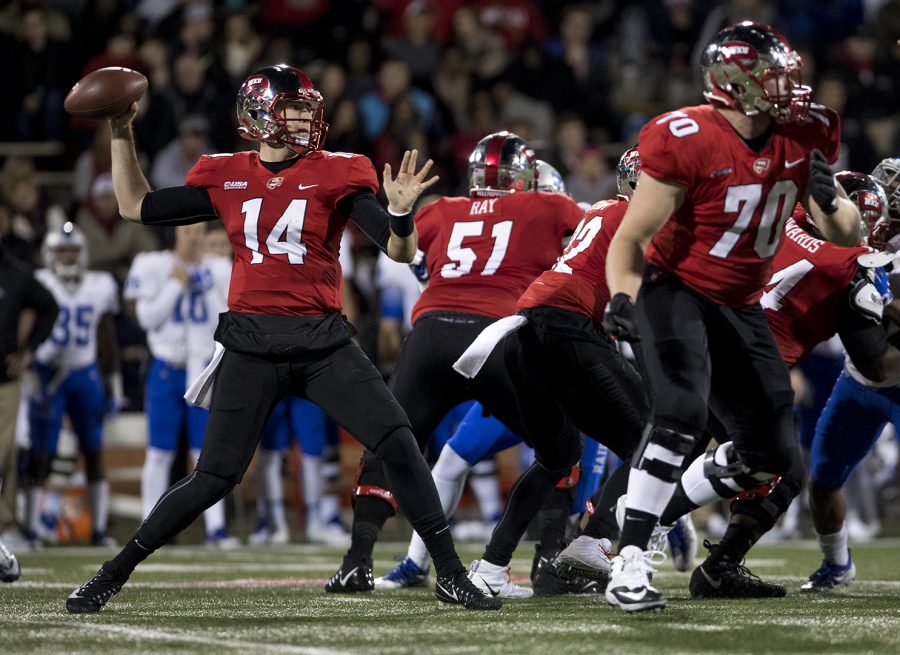 Midway through the 1st quarter of the Cure Bowl against Georgia State, redshirt senior quarterback Mike White found redshirt senior tight Deon Yelder end for a 54 yard touchdown to give WKU a 10-7 lead. At the time, it looked as if the Hilltopper offense was in for a big day. But that wasn’t the case; White was sacked six times and the Hilltoppers didn’t visit the end zone again until late in the fourth quarter when the game was already out of reach. Georgia State scored 20 unanswered points after Yelder’s initial touchdown en route to a 27-17 victory.

“I felt like we were ready coming into this game,” Redshirt sophomore running back Marquez Trigg said. “I thought our preparation went well. There were just some plays we didn’t make. We have to work hard in the offseason, watch some film, not from just this game, but all season,”

The Hilltoppers got the football first and went three and out on their opening possession. After redshirt junior punter Jake Collins punted the ball to the GSU 35 yard line, GSU quarterback Conner Manning drove the Panthers deep into WKU territory. On 3rd and 11, Derik Overstreet sacked Manning and the Panthers converted a 42-yard field goal to give the Panthers an early 3-0 lead. The Hilltoppers’ second drive was short-lived like the first one, only this time there was different result. On the first play, White found senior receiver Nacarius Fant for a 21-yard catch and run. On the 2nd play, Yelder slipped wide open behind the Panthers’ secondary and White found him for an easy 54 yard touchdown to give WKU a 7-3 lead. GSU responded rather quickly. After two big plays put the Panthers in WKU territory again, Demarcus Kirk ran it in from 26 yards out to put the Panthers back on top 10-7.

After the Hilltoppers were forced to punt, the WKU defense made the game’s first big defensive play. Redshirt junior linebacker Masai Whyte hit Manning after he attempted to run, knocking the football out in the process and senior cornerback Joe Brown recovered at the GSU 26 yard line. Redshirt junior kicker Ryan Nuss hit a 39 yard field goal three plays later to tie the game early in the second quarter. After GSU added another field goal to take a 13-10 lead, the Panther defense made a big play of their own. Facing 3rd and 11 at the GSU 35 yard line, White was sacked, fumbled the ball, and GSU linebacker Chase Middleton recovered it and returned it to the WKU 36 yard line. It was the fourth time White was sacked in the 1st half.

Three plays later, Manning found Jonathan Ifedi for what appeared to be a 36 yard touchdown on a screen play. However, after review it was ruled Ifedi’s knee touched the ground and the touchdown was negated. Wright would miss a 54 yard field goal and Georgia State would take a 13-10 lead into the half.

With 5:55 left in the 3rd quarter the Georgia State offense came away with the biggest momentum change of the third quarter. Manning got the football back in his hands after a triple reverse and found Roger Carter for a 42 yard touchdown down the left sideline to give Georgia State a 20-10 lead. The Hilltopper offense never threatened to score throughout the third quarter.

White would find Deon Yelder for a 4 yard touchdown with 2:34 to play to make it a 27-17 game. Yelder finished the game with five catches for 112 yards and two touchdowns, but his final touchdown was too little too late. GSU recovered the ensuing onside kick and milked the clock as much as they could. White and company got the football back one last time, but Middleton intercepted a pass that would end up being White’s final collegiate pass. White finished his final game 26/39 for 351 yards, two touchdowns, and one interception.

“The quarterback position is near and dear to my heart. I played the position and I’ve coached some good ones. Mike is up there with some of the best i’ve been around,” Sanford said.

“It was disappointing for Mike to not go out the way he deserves to go out. He was very helpful in our transition of our staff.”

The loss ends Sanford’s 1st season as head coach at 6-7, giving the Hilltoppers their first losing season since 2010. It’s also WKU’s first bowl loss since a 24-21 loss to Central Michigan in the Little Caesars Bowl. The win was the first bowl win in Georgia State history.

“It starts with me,” Head coach Mike Sanford said when asked about the disappointing season. “I’m going to look at what I did, practice schedules, everything aspect of it. I haven’t lost any faith in what we did and how we do it. I’m proud of our team and coaches.”