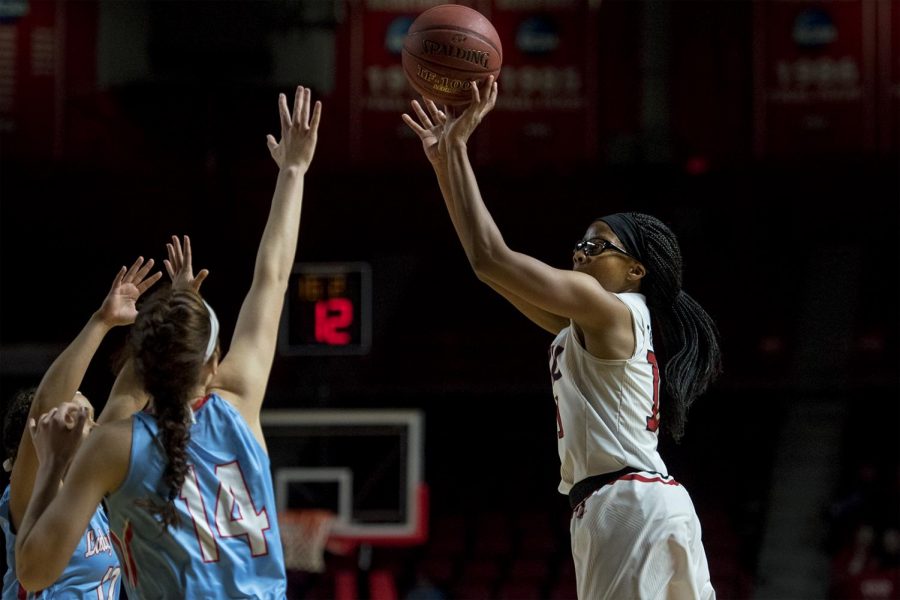 WKU earned its third consecutive lopsided victory on Tuesday evening, dominating from start to finish to roll to an 87-48 win over Mississippi Valley State inside Diddle Arena.

In their fifth straight win, the Lady Toppers (6-3 overall) shot an impressive 49 percent from the field and outscored MVSU 23-10 in the second quarter to take control. Defensively, WKU forced 19 turnovers and turned those takeaways into 27 points on the other end of the court.

“I think the most important thing is we’re just trying to get better as a group and have some consistency across the board,” WKU head coach Michelle Clark-Heard said. “I was happy the first half as far as points wise but then we came out in the third quarter and gave up 19. Just a lot of the little things we have to clean up.”

WKU led 18-10 after the first quarter and then 41-20 at halftime. The Lady Toppers went on to outscore Mississippi Valley State (0-7) 46-28 in the second half to record another commanding victory.

WKU took a double-digit lead of 17-6 at the 3:51 mark of the first quarter after a 3-pointer by Bopp. MVSU responded with a couple of buckets to get back to within single digits, but the Lady Toppers held an 18-10 advantage after one.

Five straight points to open the second put WKU up 23-10 with 9:01 remaining in the half. Ivy hit a 3-pointer from the top of the key and Tashia scored inside to help the Lady Toppers take a 13-point lead.

That advantage quickly moved to 31-12 at the 5:11 mark after Raneem Elgedawy scooped up a rebound and put it back in. At that point, WKU was outscoring the MVSU 13-4 in the period and Tashia was up to six points in the quarter alone.

The Lady Toppers went on to outscore the Devilettes 23-10 in the second and took a 41-20 lead into the locker room at halftime. After two complete quarters, Tashia had 10 points, three rebounds and three assists while Bopp had nine points.

“Coach is always telling us how we need to come out here and play our best and try to get better,” Bopp said. “So, especially in these games we need to try our best.”

LaKendra Bassett had six points for Mississippi Valley State at intermission and finished with 17.

WKU shot 15-of-35 from the field in the opening half and forced 13 MVSU turnovers, scoring 17 points off those takeaways.

“I talked to them a lot in the locker room at halftime about playing the next play,” Clark-Heard said. “Sometimes what happens is that you get caught up after you miss a shot and that carries over to not doing what you’re supposed to be doing defensively.”

Following the break, MVSU came out in the third quarter and played like a different team.

After three, WKU held a 67-39 advantage over MVSU entering the final quarter.

“I think we’re making progress,” said Clark-Heard. “We have to grow every game. We have to take a lot of positives and we’ve gotta learn about the things we’ve gotta get better at. That’s the most important thing I’m trying to do every single game.”

Already leading by a large margin, the Lady Toppers cruised through the fourth, outscoring the Devilettes 20-9 to claim their fifth straight win.

WKU returns to action on Saturday at 11 a.m. (CT) against Stetson in the 2017 West Palm Invitational in West Palm Beach, Florida. Following that game, the Lady Toppers will meet Toledo the following day at 10 a.m. to close out tournament play.

“I feel like we just take each game the same – I don’t really see any difference,” Tashia said about the team’s mindset in tournaments. “We always want to go win a championship and try to get as many wins as we can.”