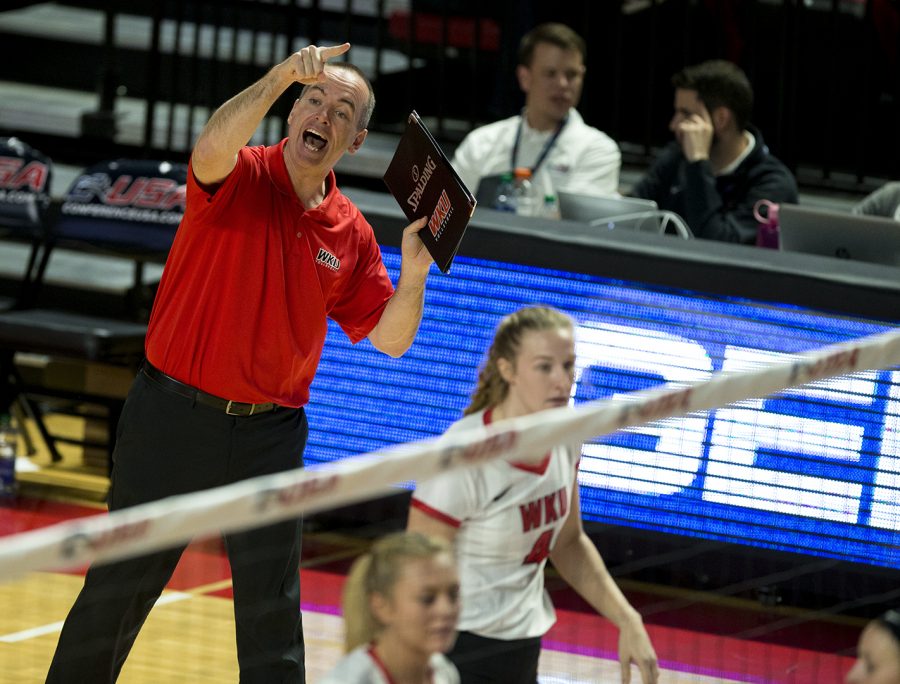 WKU head coach Travis Hudson yells instructions to his players during their game against Charlotte in the C-USA tournament Nov. 17. "We did not like how we finished last year and we've had a goal to get back to this point" Hudson said after the game.

LEXINGTON – It was the upset that almost was for WKU.

On Saturday, the Lady Toppers picked up where they left off on Friday afternoon, claiming the first two sets over Kentucky in dominating fashion.

However, the No. 6 Wildcats would not be denied on their home floor.

Like the match against Notre Dame on Friday afternoon, the Lady Toppers threw a load at the Wildcats in the first two sets and left the opposition with few answers, and Kentucky head coach Craig Skinner’s message to his team at the intermission was simple.

“There’s nothing to get upset about,” Skinner said to his team at the intermission. “We have to slow down [Alyssa Cavanaugh], we have to get transition kills and we have to serve them out of system more and get them to pass behind the 10-foot line more. If we did those three things, we would have a chance to win the match.”

When the Wildcats (28-3) cleaned up those things, they played as if they were on a mission.

“Kentucky played like champions. We gave them our best shot,” WKU head coach Travis Hudson said. “They are a high-character group of kids. Kentucky is a high-character staff. They’re well coached and we knew they weren’t going to go away. We certainly didn’t think we were going to cruise on out of here in three games.”

“We were up early on and we knew we had three big punches left to try to land one,” Hudson said. “They punched back and took a 20-17 lead [in the second set] and we stood up and dusted ourselves off and came back and took that set.”

After the second-set win for WKU, all of the energy displayed in Memorial Coliseum fed the Wildcats.

“We’ve had great crowds, and the last two days these crowds have been unreal,” Skinner said. “They’ve willed us. I don’t hear the crowd very often to be honest with you, I’m trying to manage the game, but there’s a couple times I heard tonight them chanting “Go Big Blue” and it was certainly motivating.”

WKU led 16-15 late in the third set before Kentucky used a 10-3 closing run to avoid the sweep. The Wildcats maintained a small lead throughout the proportion of the fourth set, which was just enough to give them a 25-21 win.

In the decisive fifth set, the Wildcats jumped out to a 4-0 lead to grab early momentum before the Lady Toppers fought back and kept it close throughout, eventually tying the set at 12.

Kentucky finished off the Lady Toppers with a 3-point run to win the match, capped off by an attack error by Taylor Dellinger.

Alyssa Cavanaugh finished off her WKU career by leading all players with 23 kills, a new school record in NCAA Tournament matches, while Jessica Lucas also concluded her tenure with 51 assists, breaking the school record for assists early in the match and finishing with 5,338 assists in her career.

Along with Lucas’s record night, another aspect of her game caught her head coach’s eye.

“Kentucky is pounding us across the floor and I’m begging [Lucas] to move inside and she is looking at me and smiling. I don’t think I was smiling,” Hudson joked. “That smile is genuine and it is something that impacts the kids around her every time we take the floor.”

Rachel Anderson led the Lady Toppers with nine blocks while Sydney Engle and Emma Kowalkowski dug 14 and 12 balls on defense, respectively. Engle recorded a double-double with her 14 digs and 10 kills as WKU finished with four players in double-digit kills (Cavanaugh with 23, Dellinger with 12 and Anderson and Engle with 10 each).

Cavanaugh finished the NCAA Tournament run with 41 kills over the weekend and hit at a personal .405 attack percentage in Saturday evening’s match.

Afterwards, an emotional Hudson showed nothing but praise for his group of seniors in Cavanaugh, Engle, Lucas, Amara Listenbee and Maggie Singleton.

“Their legacy is large and it is lasting and they are all high level students as well,” Hudson said. “They have laid a foundation and hopefully continue to catch the attention of people in the country that WKU has got a pretty special volleyball program.”

WKU’s senior class finished with a career record of 123-17 in its career, as the Lady Toppers won a conference championship and reached the NCAA Tournament in each of the last four seasons.

“As I told our kids, there are 63 teams in this tournament that are going to go home disappointed, but all the reasons they hurt so bad right now are all the reasons that I’m so proud of them because they were invested in this, they poured their hearts into this, and certainly have no regrets,” Hudson said.

Kentucky will host BYU in the Sweet Sixteen in Lexington at a time that has not yet been determined.