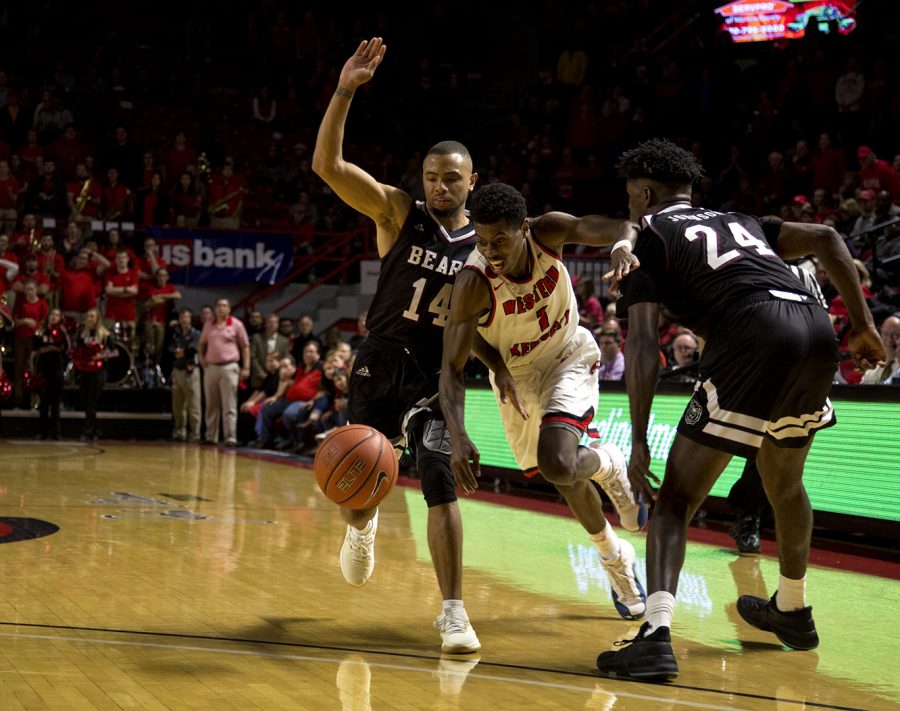 Junior guard Lamonte Bearden (1), pushes through the defense of Missouri State Bears to gain possession of the ball on Friday, Nov. 10 at E.A. Diddle Arena.

After finishing non-conference play with an 8-5 record, the WKU men’s basketball opened up Conference USA play with a home win against Louisiana Tech on Thursday night. Graduate transfer forward Dwight Coleby scored 16 points and grabbed a career high 15 rebounds to help WKU hold on for a 69-68 victory.

“I put in all the work, I feel like it should show results,” Coleby said following his double-double performance. “This is just a part of it. I just hope it continues as the season goes on.”

LA Tech center Joniah White’s early bucket gave the Bulldogs an early 2-0 lead. The Hilltoppers then went on an 15-3 run, started off by a 3-pointer from Johnson and capped off by a Johnson block that led to a fast break dunk for freshman forward Marek Nelson to give WKU a 15-5 lead. WKU stretched its lead all the way to 14 before the Bulldogs began to storm back. Exavian Christon’s 3-pointer with 2:02 left in the 1st half capped off a 9-2 run and helped cut the Hilltopper lead to 33-27. Hollingsworth answered with a step-back 3-pointer of his own and Johnson added another layup with 17 seconds left in the 1st half. Johnson entered the half with 12 points. LA Tech guard DaQuan Bracey drove in for a layup right before the buzzer as WKU entered the half with a 38-29 lead.

The Bulldogs came out with a 1-3-1 zone defense to begin the second half in hopes of avoiding another early Hilltopper run. Thompson had other plans. The former Virginia guard hit a 3-pointer on WKU’s opening possession before throwing an alley-oop dunk to Coleby. Thompson would bank in another 3-pointer to give WKU a 50-40 lead with 14:06 to play.

“We were able to score against their zone early,” Stansbury said. “Darius got it going with a couple threes and found Dwight inside. I think we became not as efficient after that point. We just weren’t sharp. You have to have offensive toughness, and I didn’t think we had that as much as you need to have it against quality teams.”

Slowly but surely, the Bulldogs crept back into the game. Bracey’s layup cut the lead to 64-62, and Thompson answered with a 3-pointer to push the lead back out to 5 with 2:04 to play. After back to back layups by LA Tech guard Derric Jean, Bracey added his final bucket of the game to give the Bulldogs their first since a 2-0 advantage just 38 seconds into the game.

“Bracey is a handful. Hes a good guard and He’s tough and quick,” Stansbury said. “He’s as good as anyone in this league at attacking the rim. I don’t think there’s anyone better than him.”

Following Bracey’s layup, Bearden took the ensuing inbounds pass and stormed down the court and was fouled by White while attempting the go-ahead layup with 12.5 seconds to play. The Buffalo transfer missed both free throws, but was able to haul in the offensive rebound after the second miss and was fouled by Bracey, giving himself a shot at redemption at the free throw line. Bearden nailed both to give WKU a 69-68 lead with 11 seconds to play. Bracey drove and took a contested shot with freshman guard Taveion Hollingsworth all over him. Coleby stepped in and got his hands on the go-ahead bucket to help WKU hold on for a 69-68 victory.