Theatre and Dance shine in ‘Revusicals’ 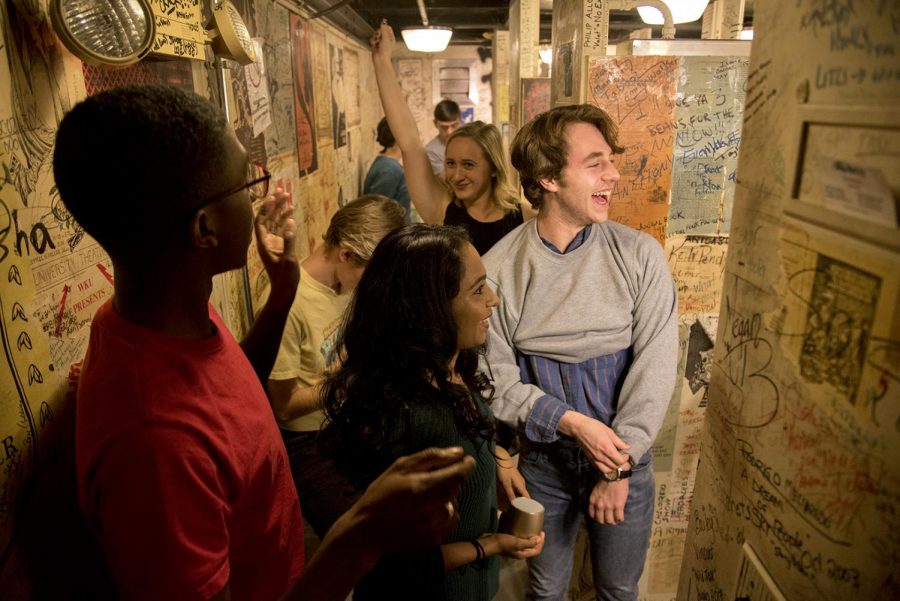 Louisville junior Matthew Dant (right), freshman Shyama Iyer (left) also of Louisville and other cast members of Revusicals dance while listening to music before going onstage Tuesday. Dant says these interactions are part of his pre-show ritual. “I feed off of everyone’s energy...and I always try to talk to everyone to get used to that interaction, moving and reacting.”

Musical theatre is arguably more popular than ever, which means ticket sales are surging. With that said, finding a place to see student works inspired by “The Little Mermaid,” “Company” and “Heathers: The Musical” all in one place for free is a deal. Especially when the aforementioned shows feature re-writes from the talents of student directors and writers, students who can sing their faces off and a way of storytelling that is somehow both pervasive and individualistic.

The show began with “The Little Mermaid,” but this time re-written as “Ursula: The Musical” for the student directors’ Advanced Performing Arts Studio class. This meant the show’s infamous villain temptress was no longer evil, instead Poseidon took an evil turn towards the show’s conclusion.

The show’s songs included originals, such as “Part of your World,” sung and acted in an eccentric Disney fashion by freshman Riley Davis as Ariel, and “Poor Unfortunate Souls,” sung ominously by Arielle Conrad as Ursula. But it also included new songs written to accompany the new plot line that were on par with those of original composer Alan Menken. The ensemble of singing sisters had harmonies that were the peak of vocal performance in this show. This revusical in particular shined most in its use of original content and altering the plot to create an interesting, yet familiar tone.

The next production was “Co.,” a spinoff of the critically-acclaimed musical “Company.” The show is already a difficult feat in and of itself – after all, it is a Sondheim score. But the complex themes of discovering love and finding yourself takes place in vignettes which can be hard to make a fluid show, especially when fit into a 30-minute segment as directors Aaron Schilling and Colin Waters did.

But the show still seemed cohesive and intriguing, marked by powerhouse performances in Connor Keef as Bobby, whose starry-eyed gaze into nothingness captured the essence of life’s confusion, Mary Beth Turner as Amy, singing “Getting Married Today” to the audience’s delight, and Kayleigh LaGrutta as Joanne, tackling a role originated by Elaine Stritch and Patti Lupone but sung expertly. The show had a unique sense of ensemble and talent that made it very enjoyable and thought-provoking. The only question left lingering is when the show will become a full-fledged production, for this cast could pack the house.

The last production was based off “Heathers: The Musical,” named “What’s Your Damage?” The original show reached its peak in popularity in musical theatre during its run off Broadway in 2014, but it’s actually based off of the 1988 cult classic film starring Wynona Rider and Christian Slater.

The show followed Veronica Sawyer, played by the insanely talented Reagan Stovenour whose vocal range was seemingly limitless, as she navigates the ups and downs of high school and being integrated into the school’s top clique, The Heathers.

She eventually finds herself in a downward spiral with love interest JD, played by Mason Stevens, as they find the easiest way to solve their problems is to kill them, with ‘them’ meaning Heather Duke, Kurt, Ram and Heather McNamara. The Heathers, played by Paige Brouillette, Shyama Iyer and Sabrina Sieg, were fantastic in their comedic timing and airhead aptitudes.

The show’s ensemble also strengthened the storytelling and believability of the unhinged plot. The show’s greatest success came in using humor to their advantage and having well-developed, hilariously crazy characters.

Three shows, each different in their own respect, but somehow connected through the theme of finding your place in the world. WKU Department of Theatre and Dance’s “Revusicals” showed the true power of theatre and creating art in general.