Lady Toppers clean up errors to get past Charlotte 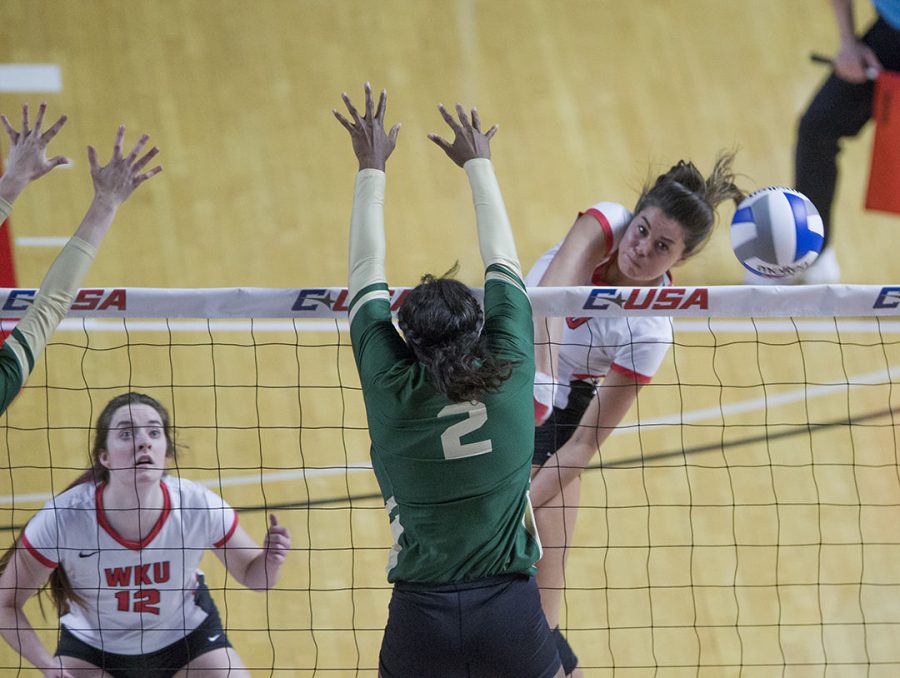 WKU outside hitter Alyssa Cavanaugh (7) spike the ball for a kill against Charlotte Nov 17 during the Conference USA championship held in Diddle Arena.

Going into the locker room tied 1-1 in the match after committing six attack errors through two sets, WKU head coach Travis Hudson’s message to his team was simple.

Taking Hudson’s advice, the Lady Toppers came out in sets three and four and “played their game,” taking the final two sets including a 25-6 throttling of the 49ers in the fourth set.

“Those were not only points for them, but those were points that we could’ve had,” senior setter Jessica Lucas said of the errors. “Travis [Hudson] just told us to play our style of volleyball. We kind of settled down [in the fourth set]. We started playing our game and didn’t take as many errors.”

The Lady Toppers led 7-6 in the third set when Charlotte outside hitter Alex Boone was forced out of the match with a knee injury. Boone had led the 49ers with eight kills on a .438 hitting percentage up to that point of the match.

“It had a big effect,” Hudson said about Charlotte losing Boone. “It’s a terrible thing to happen to a student-athlete when you work all year to get to the conference tournament. She was playing very well for them down the stretch, and it was certainly a bit of a gut punch for them.”

After that, the Lady Toppers took control of the lead and maintained that lead for the rest of the set, winning the third set 25-20.

The Lady Toppers turned on the burners in the fourth set, charging out to a 14-3 lead to force a Charlotte timeout before locking down the 49er offense in a 25-6 set win, which was the first time that the Lady Toppers had held an opponent to single digits all season.

Charlotte won a tight second set 27-25 after WKU took the first set at a comfortable 25-14 margin.

“Rachel played phenomenal today,” Hudson said. “She really kind of anchored us in there until we could finally settle down a little bit. That’s what you hope a good player like her can do.”

The Lady Toppers tallied nine team blocks on defense, five from Anderson and two apiece from Cavanaugh, Sydney Engle and Taylor Dellinger. Engle and Darby Music had 11 digs each to lead WKU.

Tatyana Thomas led Charlotte with 10 kills on a .227 hitting clip while Boone and Janell Sparks each added eight kills. The 49ers hit at a collective .065 percentage.

WKU will advance to play the winner of Friday afternoon’s match between Rice and Southern Miss in the second round of the tournament at 1:30 pm on Saturday in Diddle.

“It’s definitely nicer knowing some of the people in the stands,” Anderson said about being able to play the tournament in Diddle. “Going to play at other places, we don’t have the crowd that we do here. I feel like our team is very relaxed and comfortable here.”