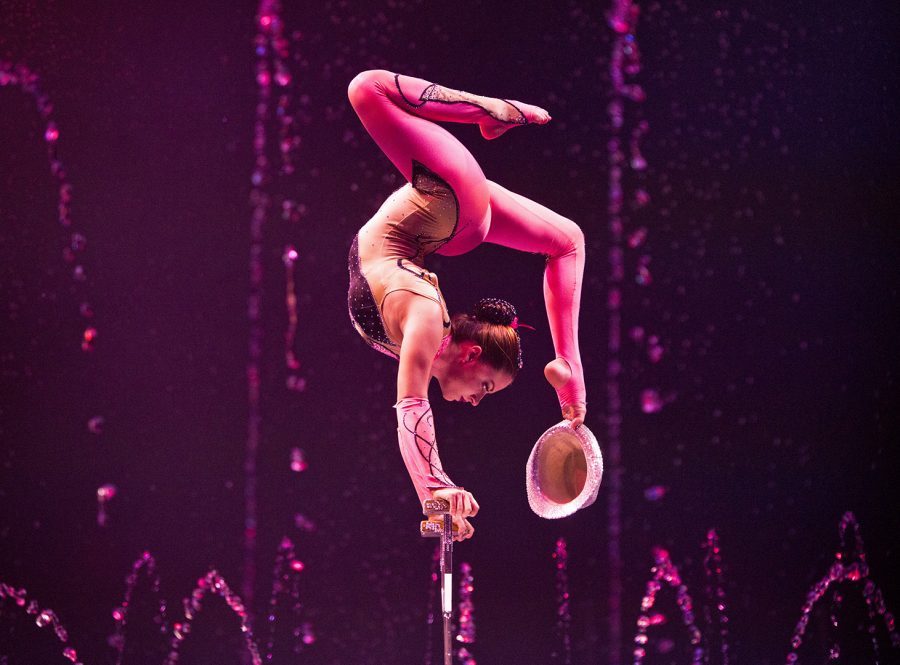 Sandy Giannuzzi performs a contortionist act at Cirque Italia's Water Circus on Sunday. This was the first time the water circus has come to Bowling Green.

On a rainy Sunday afternoon, the parking lot of the Greenwood Mall was filled with something out of the ordinary.

Flags from nations around the world circled around a large white tent adorned with flashing lights reading “Cirque Italia.” A line of hundreds of people, young and old, formed under an arch welcoming them to the water circus.

Though it originated in Italy, Cirque Italia is a travelling circus that features performers from all over the world. It is unlike a traditional circus because it places a heavy emphasis on water.

As a part of its traveling performance, Cirque Italia features a 35,000-gallon tank of water. According to its website, performers “bring unique aerial acts, hand balancing, contortionists, and many more surprise performances that are breathtaking.”

The company prides itself on being more similar to a Broadway production than to a traditional American circus.

The tour is split into two groups: one traveling east, the other traveling west. The eastern tour, named “the gold unit,” stopped in Bowling Green before heading to Lebanon, Tennessee next week.

Started in 2012 by Manuel Rebecchi, Cirque Italia has been said to be “one of the most innovative traveling shows to be staged in the United States,” according to its website. Rebecchi had experience in the European circus scene for most of his life. His family is well revered as being a prestigious circus family. By combining technology and design, the water circus’ mission is to bring this display of elegance to as many people as possible.

The company emphasized the affordability of their tickets, and offered a free child ticket per family. Representatives of the tour described the tour as, “bringing Las Vegas to each city.”

Families from the Bowling Green area were attracted to the mystery of the water circus. People waiting in line described it as “something new,” and saw it as a unique opportunity for family bonding.

A representative of the tour commented on how the entire touring company was like a family. She spoke highly of the “vibe” and “emotion” that went along with the production and said it was much more pleasant than any other circus tour she’d ever worked with.