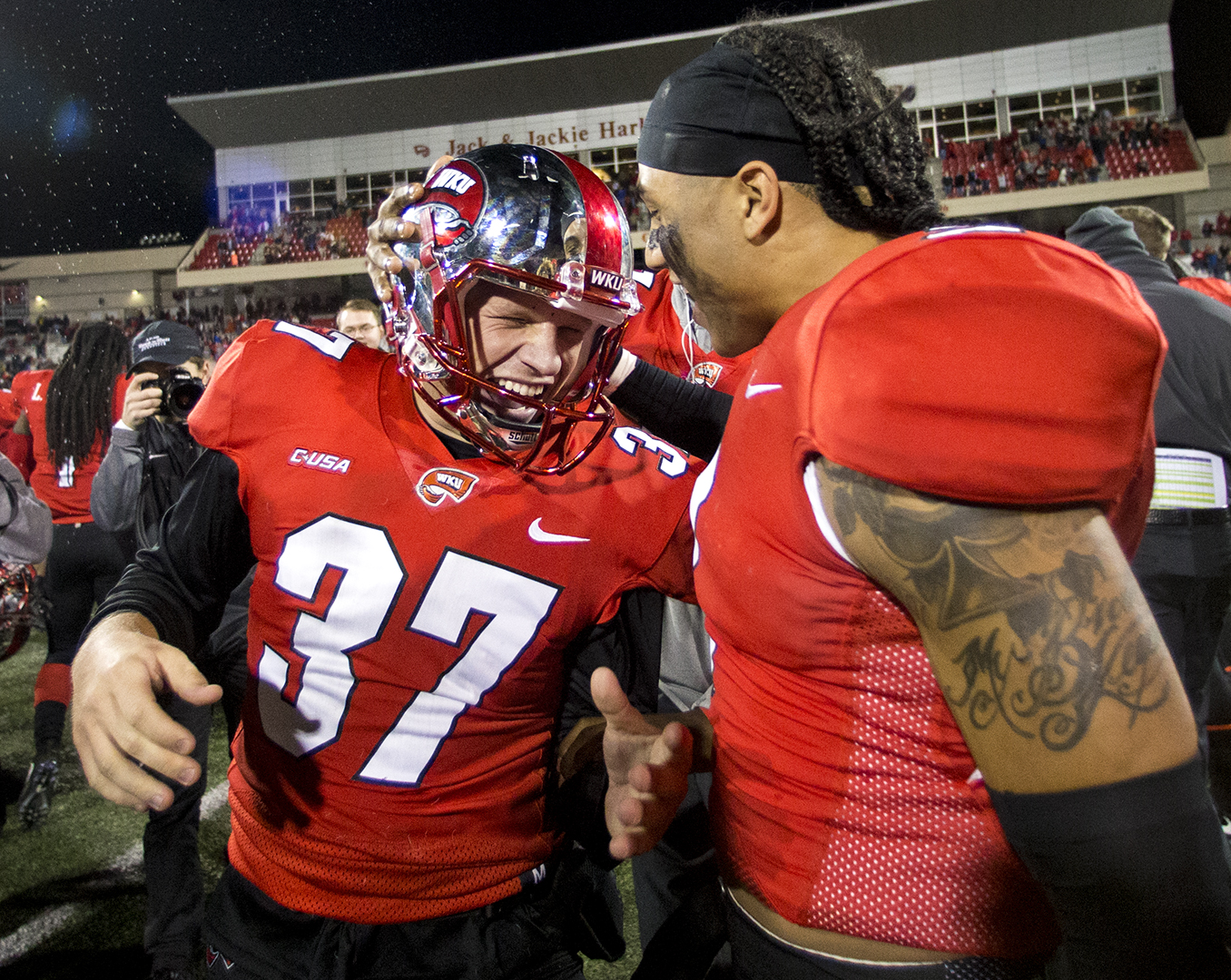 WKU kicker Ryan Nuss (37) is congratulated by Jacquez Sloan (2) after kicking a field-goal in triple over time to win their game vs. MTSU 41-38 in L.T. Smith stadium.

In the WKU’s annual spring game in April, redshirt junior kicker Ryan Nuss earned the title of “Mr. Irrelevant” after the White team made him the last player chosen in the spring game draft. At the time, Nuss wasn’t even the starting kicker.

On Saturday night, Nuss became more than relevant after kicking a 37-yard field goal in triple overtime to give Western Kentucky a 41-38 win over archrival Middle Tennessee State and make the Hilltoppers bowl eligible for the seventh consecutive season.

“He validated the very reason why he was chosen to become our starting kicker tonight,” head coach Mike Sanford said of Nuss. “Those were adverse conditions for a kicker. The wind was howling, and he put that ball right through the pipes. That ended up being the difference. Our kicker made it, their kicker didn’t.”

What appeared to be a defensive struggle through three quarters turned out to be a shootout when it was all said and done. WKU led 10-3 after three quarters thanks to a 9-play, 76-yard scoring drive in the first quarter where White went for 6-6, eventually capping it off to a 14-yard catch and run to redshirt senior tight end Deon Yelder. White started the game 14-14, breaking Brandon Doughty’s record of consecutive completions in a game.

“Watching their film, I’ve never coached against a team that blitzes more than they do,” Sanford said. “We needed to get the ball out of his hands. We needed high completion percentage type throws early to get in a rhythm and not put Mike in a position where he has to drop back and hold on to it like we’ve had to in the past.”

White and company had an opportunity to make it a two-possession game on their opening possession of the second half. The Hilltoppers drove 54 yards before facing a 4th and 1 in MTSU territory. White kept the football on a zone read, was tackled short, fumbled the football and the Blue Raiders recovered. After the WKU defense got another stop, Nuss hit a 29-yard field goal to make the score 10-3, a lead the Hilltoppers would take into the 4th quarter.

Then, the scoring barrage began. On the first play of the fourth quarter. MTSU quarterback Brent Stockstill found Patrick Smith down the left sideline for a 21- yard touchdown to tie the game at 10.

On the ensuing possession, White threw out to freshman running back Jakairi Moses and the pass hit the ground. The whistle never blew, and MTSU linebacker Darius Harris picked up the loose ball and ran untouched for a 40-yard touchdown. White’s pass was a ruled backwards lateral, and all of a sudden, the Blue Raiders flipped the 7-point lead in a span of 24 seconds. However, it didn’t take long for WKU to flip the score again.

White found senior receiver Kylen Towner for a 65-yard touchdown pass on the second play of the following possession. Towner finished with four catches for 105 yards and a touchdown in his final game at Houchens-Smith Stadium. After the Hilltopper defense got another stop, White found redshirt sophomore wide receiver Lucky Jackson down the left sideline for a 93-yard touchdown to put the Hilltoppers back in front by seven. Jackson finished the game with five catches for 109 yards and a touchdown.

“We had three receivers finish with over 100 yards. That’s awesome,” White said. “Whenever you can get that many guys involved, it makes it so much harder for a defense to prepare for you and defend you. Whenever we can get all those guys involved is what I love the most.”

MTSU running back Tavares Thomas would punch it in from 2 yards out to tie the game at 24 late in the fourth quarter. Neither team was able to drive into field goal range, and regulation ended in a 24-24 tie.

Thomas would punch it in for his second touchdown of the game to begin the first overtime, putting the pressure on White and the offense. White found senior receiver Nacarius Fant for a wide open 5-yard score to tie things up. Fant finished with a career high 14 catches for 101 yards and a touchdown in his final game in front of a Bowling Green crowd. Fant’s 14 catches were the second most in a single game in WKU history.

“I promise you, every play, I’m going to know where No. 1 is,” White said of Fant. “I told him joking around in practice, ‘Listen, we may need you to have like 10 catches.’ He responded ‘Watch me get more.’ Then he came up to me after overtime and was like ’14 catches, what do you think about that?’ I’m going to miss that camaraderie with him and little stuff like that.”

WKU received the football first to begin the second overtime, and White found graduate transfer Cam Echols-Luper for a 13-yard touchdown strike over the middle to give WKU a 38-31 advantage. MTSU running back Terelle West answered with a 3-yard touchdown to send the game into the third and final overtime.

The Blue Raiders got the ball first, and Stockstill threw three straight incompletions. MTSU kicker Canon Hooker’s 42-yard attempt went wide left, setting the stage for Nuss’ entrance into WKU history. Redshirt junior running back D’Andre Ferby ran the ball twice for 5 yards, and Nuss knocked in a 37-yard field goal to end the game. It was the fourth time in six years WKU and MTSU’s 100 Miles of Hate rivalry went to overtime.

WKU improved to 6-5 (4-3 C-USA) with the win. The Hilltoppers travel to Miami to take on Florida International (6-3) next Friday in their season finale.