From the editor: WKU proves dedication in harming the Herald 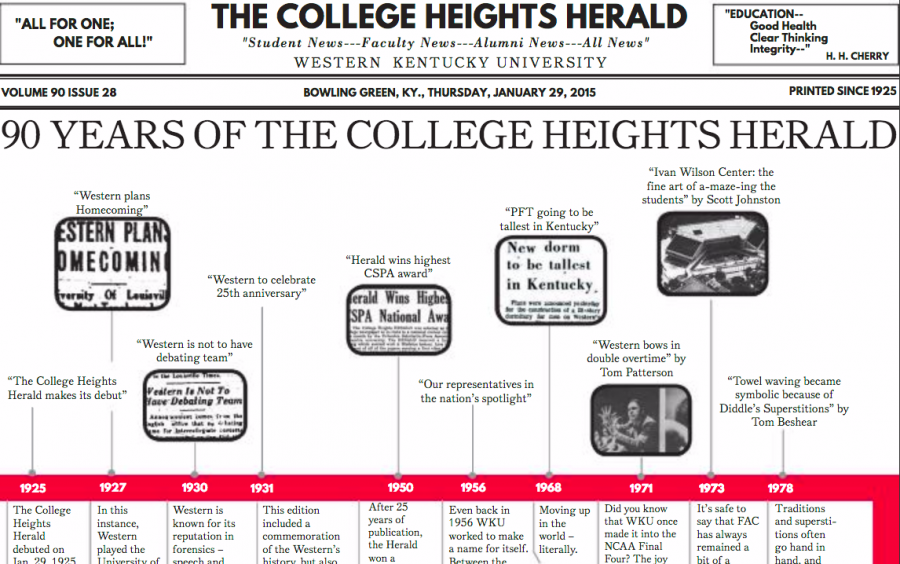 Do you remember when you were a kid and you would spend hours, or maybe even weeks, making something with your friends?

Maybe it was a treehouse, or a puzzle, a sandcastle, perhaps a fort or some odd, made-up game only you understood. It doesn’t matter what it was exactly, but to you it was everything. You put your time, effort, failures and successes into it. It was part of you.

But then the schoolyard bully or the angsty teenagers down the street came and tore it all down, took it all away. Part of you was taken away too.

WKU stole half of the College Heights Herald’s reserve funds, amounting to more than $50,000.

In doing so, it feels like part of me was taken away.

In doing so, it feels like they have also taken away part of the countless others who came before me as editor-in-chief. Going back 92 years to the first editor, Frances Richards, to last spring’s editor and current managing editor Shay Harney.

I have no doubt the Herald of today is, at its core, the one Frances Richards once led. One full of friends working on a puzzle. Putting all their time, effort, failures and successes into it.

However, I suppose the appropriate phrasing would be “WKU allocated funds from the Herald to cover WKU’s budget deficit.” But you wouldn’t say a pickpocket “allocated” your wallet, so neither will I.

Here’s what happened: one of former President Gary Ransdell’s last acts before leaving WKU was to change the university’s carry forward policy.

Prior to the changes, WKU’s carry forward policy allowed programs and divisions to reserve money leftover at the end of each fiscal year, think of them as “rainy day” funds for one-time purchases like equipment. The Herald was exempt from the original policy, our money wasn’t touched. Other units generally got most of their leftover money back, but the university often took a little off the top, so to speak, for central uses.

According to the 2016-2017 operating budget, there were over 80 programs and divisions whose accounts were listed as revenue-dependent and fell under the carry forward banner. These include programs and divisions such as the Center for Gifted Students, Imagewest, the Division of Extended Learning and Outreach (DELO) and the Herald to name a few.

We’ve submitted an open records request yesterday to determine what programs and divisions were effected, by how much and which, if any, received exemptions.

Under the new policy, WKU essentially gets first dibs on leftover funds to balance the central budget at the end of each fiscal year. After the budget is balanced, remaining funds are redistributed proportionately back to the divisions.

The Board of Regents approved the new policy to balance a $6.5 million deficit from last fiscal year. For the 2018 fiscal year, carry forward funds make up over $29 million, or 7.2 percent of WKU’s operating budget. We’re still facing a budget deficit hovering between $10 and $15 million.

I realize it wasn’t only the Herald hurt by these changes. I know offsetting costs for some of these programs and divisions will not be easy and I wish none of us had been effected by poor decisions, a lack of foresight and the mismanagement of funds.

But everyone else still has a crutch to support them; we don’t. The Herald receives no support from the university for printing, student pay or a wide variety of other costs. We’re an independent paper in every sense of the word. Even our Student Publications building was built with about $1 million from our alumni and from Herald and Talisman funds. WKU pays utilities and maintenance.

All of our reserve funds, which used to be $101,000, were accumulated by selling advertising, which is how we finance each issue of the Herald. The work of selling ads has always fallen on the shoulders of students.

The money put in our reserves was put there over the years by the hard work of students, not through tuition, fees or other surcharges. Our funds are not like the unspent state allocated money you might find in others. Ours is the direct result of student work.

Several people have tried to argue this, and other points, to university administration in an attempt to exempt the Herald from the new policy, but to no avail. Maybe we should have fought harder, or maybe WKU shouldn’t be trying so hard to bankrupt us.

On top of all this, WKU is continuing to sue us so they can keep records of sexual misconduct committed by faculty and staff members secret. In the process, we’re continuing to rack up our own legal bills.

Although, I have to applaud the university. They’ve learned from their mistakes when it comes to fighting the Herald. Gone are the days where President Kern Alexander threatened to install a faculty editor at the Herald, installing a faculty member as the final say over the work produced by the Herald.

In 1988, this move was called censorship. Today, you can avoid that loaded term. Suing your student newspaper? Oh, well that’s for the privacy of students. Taking half of the newspaper’s funding? Oh, that’s to balance the budget, it’s just a one time thing.

Give me a break. I’m not sure which of these is easier to cast doubt upon.

Should I be grateful WKU didn’t steal our entire reserve? Perhaps I should, but I’m not. It shouldn’t have been theirs to take from the start.

To me this is part of the legacy Ransdell left behind – making WKU more beautiful on the outside while hollowing it out bit by bit. President Timothy Caboni isn’t getting a pass either. He holds the power to drop the lawsuit and exempt us from the policy, yet for all the changes he’s so adamant about bringing I suppose not everything changes.

Maybe you’re reading this and you hate the Herald or think we don’t matter, you think we deserve to have our funds slashed in half. One, I hope not. Two, if you do, we’re always taking strides to improve so don’t give up on us yet.

A free, robust press is important to a democratic society, if a university can be considered part of that. We’re the only publication which solely focuses on WKU. We report on the little things, like a soup celebration or a giant sweet potato, and on the critical things like sexual misconduct at Kentucky universities or in what ways WKU is spending its money.

The Herald is a laboratory for journalism. We learn, make mistakes and strive to do better. Our reserve funds have helped us provide needed equipment and a reliable cushion in the face of hard times so students can continue to receive the absolute best to prepare them for a professional career.

The Herald has won 16 Pacemaker awards, the highest honor a student publication can receive. Combined with the Talisman, we have produced 26 alumni who have actually gone on to win a Pulitzer. But the university can’t cover a deficit in Pulitzers, unfortunately.

WKU, Caboni specifically, could have exempted the Herald from the new carry forward policy. In choosing not to do so, WKU has made it clear they do not value the work done not only by the Herald but by students.

If the university has no issue taking away the money the Herald has built up then where does it stop for others? What about the Student Government Association? Greek Affairs?

Certainly WKU hasn’t had issues getting rid of programs and services which benefit students before. We’ve eliminated pre-doctoral interns in the Counseling & Testing Center, eliminated student legal services and gutted what used to be the Institute for Citizenship and Social Responsibility, an academic program that offers a minor, and the ALIVE Center and sewing the two together.

Let this action be a look into the legacy Caboni is crafting. Put this as a question in the back of your mind as he continues to hold strategic planning meetings: do students matter? Based on available trends, you could argue it depends on what sort of student.

Ransdell and Caboni can both smile their way through campus and shake your hand but at the end of the day the only value you give as a student, that I give as a student, is a budget they can take from, hard work they can profit off of. It starts with us but where does it end?

Changes will have to come to the Herald, of course, these were inevitable in a lot of ways. Working alongside other students, our professional staff, our advisors and many others we will try to steer our ship which now has a bit of a hole in the middle.

The schoolyard bully has taken our puzzle and thrown it on the ground, but we are not alone in putting it back together.