WKU keeps the foot on the gas in rout of EKU 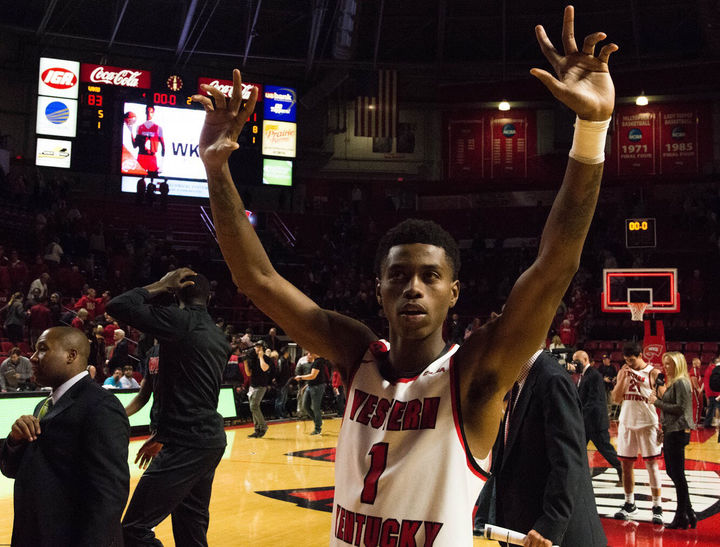 Junior guard Lamonte Bearden waves to the crowd after a 83-51 WKU victory over Eastern Kentucky. Bearden finished with 16 points.

WKU thrashed in-state rival Eastern Kentucky 83-51 on Wednesday for the largest win in the series in 50 years.

The Hilltoppers kept the pressure on in the second half despite being up double-digits, something they’ve struggled to do this year.

The Hilltoppers had a 14-point lead going into the half, and more than doubled it by the end of the game thanks to a strong second half performance.

“We started the game off 0-0 at halftime,” WKU head coach Rick Stansbury said. “We dug back in defensively, we shared that basketball.”

The Hilltoppers got quality scoring production from every position, as all seven scholarship players scored in double-figures. Junior guard Lamonte Bearden led the way with 16 points. He also tacked on six assists and three rebounds Senior guard Darius Thompson finished just one assist shy of a double-double, as he had 11 points and nine assists. Senior forward Dwight Coleby had 10 points and seven rebounds, and was a defensive menace as he blocked four shots. Senior forward Justin Johnson also stuffed the stat sheet with 11 points and seven rebounds.

The other three Hilltoppers in double-figures were freshman guard Taveion Hollingsworth who had 14, freshman forward Marek Nelson who had 10 and freshman guard Jake Ohmer who had 11 on 3-4 shooting from 3-point range. Ohmer is now 11-15 from deep in the last four games.

The Hilltoppers were the epitome of efficient and selfless on offense, shooting 57 percent from the field, and 56 percent from 3-point range. They also racked up 24 assists and turned the ball over just six times.

“You rarely see a team that loves to share the ball like we do,” Thompson said. “Anybody can score…if we carry it on for the rest of the year we then we can be very special.”

WKU had a strong defensive first half, holding EKU to 17 points. The Hilltoppers held the Colonels scoreless for over nine minutes, and went on a 13-0 run. WKU forced nine turnovers and scored 14 points off of them. They also shut down EKU in transition, outscoring the Colonels 8-0 in fast-break points. EKU also shot just 14 percent from 3-point range in the first 20 minutes. Hollingsworth led the team with eight first half points, while Coleby had a team-high three rebounds and Bearden led the team with three assists while playing 19 minutes.

Despite the lead, Stansbury wasn’t happy with his team’s effort in the first half, especially on the offensive end.

WKU didn’t relax in the second half, and found that edge. They outscored the Colonels 52-34, shooting 67 percent from the field and 70 percent from 3-point range. Bearden broke out for 10 points in the first five minutes of play, making him the team’s leading scorer despite not scoring for the rest of the half. Thompson had six assists in the second half, a team-high, and Johnson had five rebounds, also a second half best for the Hilltoppers.

The Hilltoppers take on Wright State at 4 p.m. in Diddle Arena on Saturday before heading to Ohio the next day.