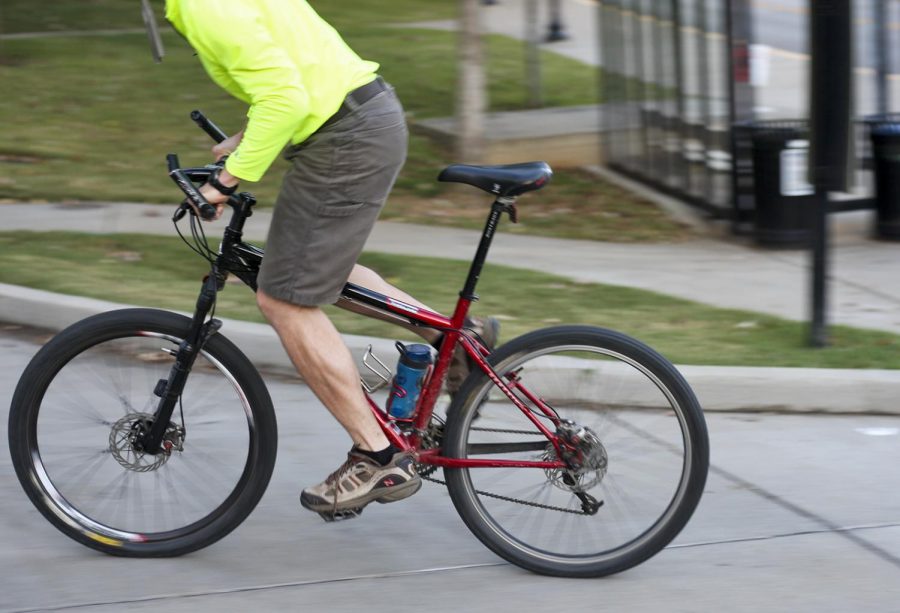 Soon, several streets around campus will have bike lanes making it safer to bike to and from campus.

WKU is considering bringing a bike-share program to campus to facilitate easy, eco-friendly transportation around Bowling Green and WKU.

The decision to start the bike-share program has not been finalized yet but based on a survey sent out to the main-campus community, there is an interest in the program, Jennifer Tougas, director of Parking and Transportation Services, said.

“We got a really strong response from the residents that would be interested in the bike-share on campus,” Tougas said.

The main-campus survey, sent in an email at the end of September, asked participants if they would be interested in a bike-share program, how much they would be willing to pay to use the bikes and which areas of town they would be most likely to bike to, Tougas said.

The survey received over 650 responses, which is a large enough sample size to consider the results valid, Tougas said.

Tougas said there are still ongoing discussions about the feasibility of the program, but she said a committee has already been looking at different bike share vendors and at two different payment models.

To find a bike to use, a person would use an app to look at a GPS and find the nearest bike. Tougas said this program also uses an app to check out and check in the bikes and to pay the fee to rent the bike.

Tougas said the fee is necessary because it’s how the bike-share vendor makes money. She said ideally, the fee would be kept as low as possible.

Tougas said Parking and Transportation has been working with Bowling Green for the past 10 years to make the city and campus more bike-friendly.

Tougas said the city has become more bike-friendly. She said education programs have helped teach residents how to drive safely when cyclists also use the road. She said the best way to increase awareness about cycling safety is to have more bikes on the road.

“The more drivers see cyclists, the more familiar they are with them,” Tougas said.

Tougas said WKU has discussed the possibility of a bike-share program with city representatives and they have been receptive to the idea. She said eventually if the bike-share program is successful, then some bikes may be placed in other parts of the city to increase visibility about the program.

“The more the program is used, the more viable the service becomes,” Tougas said.

Tougas said around 30 percent of students don’t have a car on campus, so a bike-share program would provide another mode of transportation to make it easier for students to not bring a car to campus. She said using bikes instead of bringing a car to campus would also decrease the demand for parking and save WKU money.

WKU currently has two bike-rental programs on campus: Big Red Bikes in the Office of Sustainability and bikes from the Outdoor Recreation Adventure Center, or ORAC, in the Preston Center. Tougas said the bike-share program would complement these two programs rather than replace them.

Christian Ryan, WKU’s sustainability coordinator who helps oversee Big Red Bikes, said she thinks the campus needs a bike-share program. Big Red Bikes is a program that repairs bikes and rents them to students for free. Ryan said most students who rent the bikes rent them for the whole semester and use them as their primary source of transportation.

Ryan, who also serves on the committee looking at the possibility of a bike-share, said Big Red Bikes is unable to meet the demand for bikes. She said the program has around 55 bikes, and they are often all rented out for the semester. Ryan said she often has to turn away students who ask to rent a bike for the afternoon because Big Red Bikes doesn’t have enough inventory to meet that demand.

“It’s great we have this demand for bikes,” Ryan said. “It’s not OK that we can’t meet the demand.”

Ryan said she thinks there is an entire population of students who would use bikes if they had access to them, and she could see them using the bike-share program if it comes to campus.

“It’s time for us to get a program that serves more people,” Ryan said.

Ryan said safety is concern with the program, especially because there are so few bike lanes in Bowling Green.

“Our hope is if you give more people the opportunity to ride, then these other things will follow,” Ryan said.

Ryan said she thinks the pilot program next spring will be successful because it will give students an opportunity to ride bikes around town. She said survey participants did not express an interest in using them to ride on campus from class to class, so most of the use would come from students commuting around Bowling Green.

Newburgh, Indiana, senior Sean Nelson works at ORAC and said he could see students using the bike-share program if the program was easily accessible. He said ORAC has around 15 bikes for students to rent, but they are primarily used for specific types of biking, such as mountain biking, instead of commuting.

“Most people who rent bikes are just looking for some fun,” Nelson said of the ORAC bikes.

Nelson said ORAC charges students to rent bikes, and they can be rented for a day, a weekend or an entire week. He said Bowling Green and the surrounding areas have several good places to bike if someone wants to go mountain biking, but the city itself is not very bike-friendly.

Nelson said he thinks the bike-share program would appeal to students looking to make short commutes. He said it could be successful if the program was marketed well and if it was easy to use.

“You just have to market it the right way so people don’t get confused,” Nelson said.

Tougas said she spoke to the Student Government Association, and there are students on the bike-share committee. She said she does not know when a final decision will be reached, but she would like to see the program come to campus.