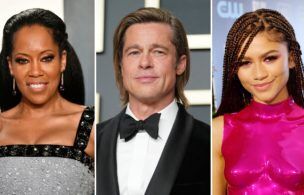 Like other award shows over the past year, the 93rd Oscars are going to look a little different because of COVID-19 safety precautions.

And in a fun reveal ABC announced that it’s been decided to do away with the term “presenters” for the April 25 televised ceremony and instead refer to the stars handing out awards as “the cast.” In a teaser released with the announcement, the question, “In a world filled with award shows, what if an award show was actually a movie? Which stars would you cast?” is posed.

Well, it seems like the show’s producers Jesse Collins, Stacey Sher, and Steven Soderbergh have an idea as they shared a hefty lineup of talent making up the ensemble cast. They will be directed by Glenn Weiss, who made headlines for the 2018 Emmys when he proposed to his girlfriend Jan Svendsen during the live ceremony. Additional talent joining the show will be announced at a later date.

Airing live from Union Station Los Angeles and the Dolby Theatre at Hollywood & Highland Center in Hollywood, the night’s festivities will include international locations via satellite. Tune in to see the stars and whether The Father, Judas and the Black Messiah, Mank, Minari, Nomadland, Promising Young Woman, Sound of Metal, or The Trial of the Chicago 7 take home top honors for Best Picture.