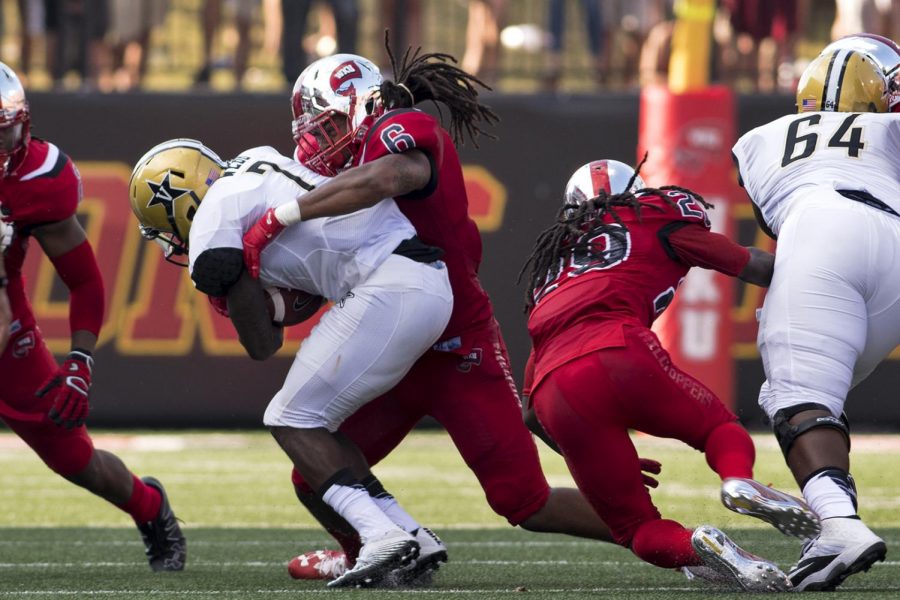 One of those goals is to win a third straight Conference USA championship, which took a huge blow after a 42-28 loss to Florida Atlantic dropped the Hilltoppers to 3-2 in C-USA play.

Another goal on that list is still obtainable: defeat a Power 5 school. The Hilltoppers’ next chance to obtain that goal is this Saturday when WKU travels to Nashville to take on Vanderbilt for the third time in three years. Two years ago in Nashville, the Hilltoppers defeated the Commodores 14-12 in a game that came down to a 2-point conversion stop by now senior cornerback Joe Brown. Last year, the Commodores found revenge in Bowling Green, defeating the Hilltoppers 31-30 in overtime.

“It’s one of our goals we set out in the preseason,” redshirt senior quarterback Mike White said about beating a Power 5 school. “We have a chance to go down and beat an SEC team. Anytime you get that chance it’s always a fun experience. You grow up watching those SEC match ups, and now we get to be one of those teams that plays in one.”

The Commodores started the season 3-0 — including a 14-7 victory over then No. 18 Kansas State — but have dropped five straight games since. With a loss on Saturday, Vanderbilt’s bowl chances will take a major hit as the Commodores would need to win their final three games in a conference where they are 0-5 so far this season.

The Hilltoppers will see a lot of familiar faces from last year’s loss. Kyle Shurmur returns as quarterback after leading Vanderbilt in passing in 2016. Ralph Webb, who ran for 95 yards and three touchdowns in last year’s matchup, returns and looks to cap off one of the more decorated, yet unknown, careers in SEC running back history during the final stretch of his college career. Webb is the 14th all time leading rusher in SEC history and when his career is over, he’ll most likely finish in the top 10 among names such as Emmitt Smith and Bo Jackson. After consecutive 1,000-yard rushing seasons, Webb hasn’t had quite the senior season, averaging less than 60 yards per game. Despite that, head coach Mike Sanford still expects Webb to be a factor in Saturday’s game.

“He was one of the best backs in college football going into this season,” Sanford said of Webb. “The storyline that has been interesting with them is they’ve really opened up the throwing game. Kyle Shurmur is playing at high level. They’ve been more of a wide-open attack, but best believe they’re going to want to feed Webb, who has been their bell-cow for the past couple years.”

White and company will look to continue to find success through the air against a Vanderbilt defense that has given up less than 200 yards per game this season. White has thrown 12 touchdowns over the past three games as WKU is averaging 36 points per game in those contests.The Commodores have struggled more against the run, giving up 238.8 YPG. However, WKU has struggled running the football and ranks dead last in the nation in rushing offense.

“They’re defensively [sound] and they have a good defensive coordinator,” senior wide receiver Nacarius Fant said. “They have a scheme set for the players [Mason] has. It’s in their home stadium and we’re going to have to bring our A-game if we want to get a win. Some of our guys weren’t recruited to schools like Vanderbilt, and they’ll get to get the chance to show themselves on Saturday.”

WKU and Vanderbilt kickoff on Saturday at 11 a.m. at Vanderbilt Stadium. The game will be televised on ESPNU.