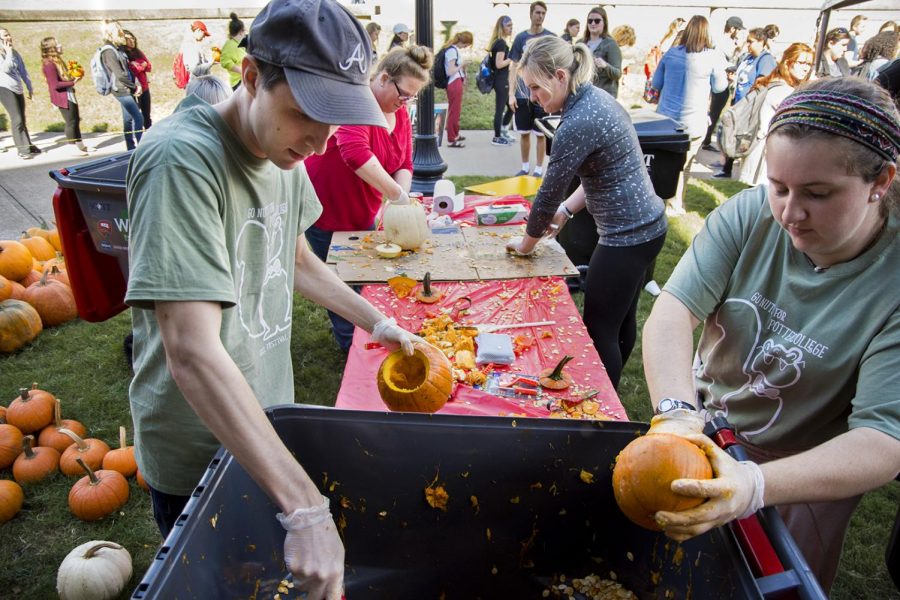 Members of Potter College of Arts and Letters empty out the insides of pumpkins to be used for flower arranging at the Potter College Fall Festival on Wednesday, Oct. 18. Other activities included metal pouring, face painting, giant Jenga and live performances.

On a sunny Wednesday afternoon, students crowded on the lawn outside of the Ivan Wilson Fine Arts Center and visited various booths. Students arranged flowers in hollowed-out pumpkins, sipped apple cider, munched on apples and waited in lines for free tee shirts.

Yesterday, Potter College of Arts and Letters (PCAL) held its annual fall festival. The event is held each year to showcase different departments within PCAL. Students made crafts, participated in activities, ate refreshments and got free t-shirts and other items. There were also stage performances, including performances by Happy Gas, the WKU Redshirts, the WKU Treblemakers, WKU Theatre and Dance and performances by other groups and individuals, including a jump rope routine and an Indian traditional dance.

“It’s nice to have so many campus activities where people are actually encouraged to do things together,” said freshman Lyla Turner as she waited in line for a free T-shirt. “It encourages the sense of community around here.”

Turner’s boyfriend, junior Orry Hestand, held her hand as they waited in line. He said he believes the festival is a good way to bring students together.

“It’s a good place to gather and do activities together, and you get free stuff,” he said.

One of the booths at the festival featured a fortune teller. The booth was for Imagewest, an advertising and public relations agency at WKU.

Imagewest’s agency manager Kara Williams Glenn wore a black veil, stood in a booth and told students their fortunes. The booth was meant to teach students about Imagewest and let them know about internship opportunities and their upcoming open house.

Senior Audrey Merrill, account executive for Imagewest, said the fortune telling got students interested and drew them over to the booth.

“I think having the fortune teller is a great way to just get people in and intrigued about what we’re doing, even though they might not know who we are,” Merrill said. “But it’s a great way for them to start talking to us and let us kind of share what we do.”

Junior Murray Huber, a member of the WKU Jump Rope Club, said she believes the festival helped spread awareness for the club.

“Most people haven’t seen jump rope like we do it, so it’s just kind of showing people what jump rope is, and that the club’s super fun and that there’s a lot you can learn,” Huber said. “It’s not just boring straight jumping. There are lots of tricks involved, and gymnastics and other elements that can be a lot of fun.”

Huber said she loves the festival and that she enjoys seeing the clubs and departments on display.

“I think it’s an awesome festival,” Huber saod. “It’s one of my favorite things on campus because it’s just really cool.”