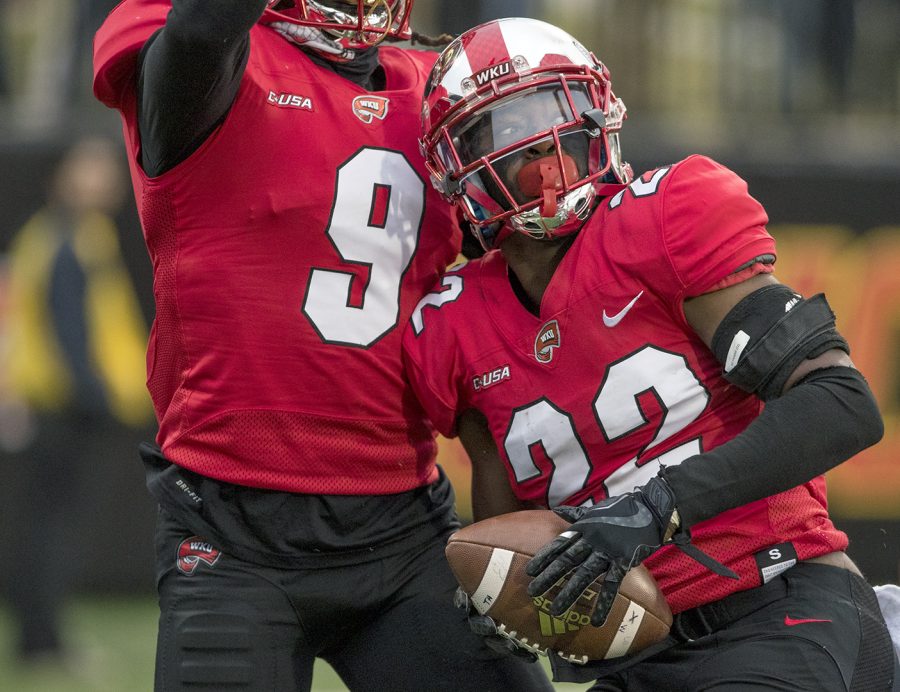 Shelbyville defensive back, DeAndre Farris (22) looks back after intercepting a pass during WKU's game against Florida Atlantic University on Saturday Oct. 28, 2017.

Western Kentucky’s hopes of three straight Conference USA titles took a significant blow this past Saturday in a 42-28 loss to Florida Atlantic. The Hilltoppers (5-3, 3-2 C-USA) now need the Owls (5-3, 4-0 C-USA) to lose two of their last four conference games and hope for a three-way tie atop the division to have any chance of playing for the C-USA title.

“On the flip side of that, adversity and failure is exactly where teams, individuals and units grow. Looking back at the film of the FAU game, there was so much positive to take from it and it ended up being about 7 to 9 snaps of football shared across offense, defense and special teams that our mistakes ended up being the difference in the game.”

In the loss, it was a tale of two offenses. The Hilltopper defense gave up a season high 368 yards on the ground while WKU’s trio of running backs garnered just 99 yards themselves. The 99 yards brings WKU’s rushing yards per game average to 83.3 yards per game, which ranks dead last in the nation at the FBS level.

Through the air, redshirt senior quarterback Mike White threw for 371 yards while the WKU defense held FAU quarterback Jason Driskel to just 93 yards and a 41.6 completion percentage. Of those 93 yards, 49 came on one play alone, meaning the WKU secondary allowed Driskel to go 9-23 for 44 yards and an interception outside of that one play. Redshirt junior defensive back Deandre Farris, who entered the FAU game near the top of the nation with 10 pass breakups, recorded a crucial interception in the first half. The interception was the ninth of the year by the WKU defense, which ranks third in C-USA.

“We just come to practice every day and we all get coached hard and accept it,” freshman cornerback Roger Cray said about the secondary. “So, basically, with us being coached hard, it makes us play hard.”

At the end of the day, sloppy turnovers and the lack of a rushing attack were the differences in the game. The Hilltoppers lost the turnover battle 4-1 and the Owls scored 22 points off those turnovers. With a 28-20 lead late in the game, White had the Hilltoppers on the move with a chance to put the Owls down by two possessions. After a sack set up 2nd and 23, White was intercepted by FAU’s Herb Miller. A 60-yard rushing touchdown followed, and FAU set off a streak of 22 unanswered points to end the game.

“I thought we had an opportunity in the fourth quarter to really put the finishing touches on that game,” Sanford continued. “When you watch the film, we’re up eight points and driving, running the ball effectively, and we take a 13-yard sack to bring up second and 23. We want to make a play and throw an interception, and the tides turn right there on that play.”

For the first time all year, special teams had a significant impact in a WKU game this season, and not in the most ideal ways. In the third quarter, the Hilltoppers drove 70 yards in 13 plays and were forced to settle for a 24-yard field goal by Ryan Nuss. Nuss’s kick was blocked, and WKU left the long drive empty handed. After FAU had taken a 35-28 lead, the WKU defense appeared to have gotten a huge stop with 7:11 left in the fourth quarter.

Facing fourth down, FAU punter Ryan Rickel decided to keep it, running 22 yards before being forced out of bounds, setting up the final touchdown of the game and ultimately the dagger.

WKU will play its final non-conference game this Saturday when it travels to Vanderbilt. With a win, the Hilltoppers will be bowl eligible. Last year, the Commodores defeated WKU 31-30 in overtime after falling 14-12 to the Hilltoppers the year before.