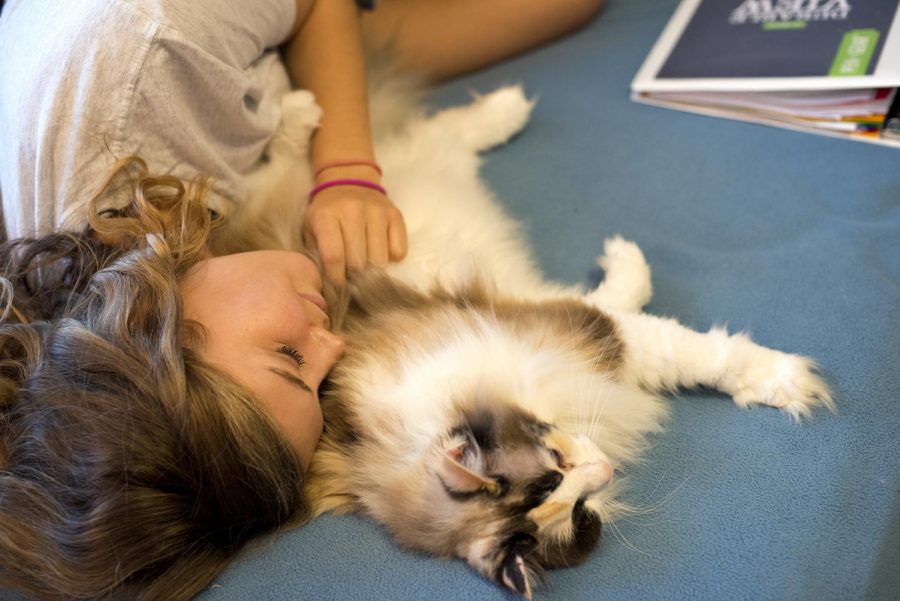 Katherine Citak, senior at WKU has had her emotional support animal, Zoee, since she was in 7th grade. Citak registered Zoee as a support animal last semester so she could keep her in her apartment. Citak's grandmother and best friends' father had both passed away, and she felt overwhelmed studying for the MCAT. "When it gets lonely, she's there. I can cuddle with her and it just makes me feel better," Citak said. "I love having her around. She's just good company."

Somerset senior Katherine Citak adopted her cat Zoee when she was in seventh grade. Now several years later, her cat lives with her in the WKU apartments as an emotional support animal.

Citak recalls how their bond was formed after Zoee was adopted.

“She literally hid behind the toilet for the first few months and I had to hand feed her for a long time,” Citak said. “She was so shy, but I feel like we bonded. I’ve had her ever since. She’s gotten a lot less shy, and she adores me, and I’m like her person.”

“I started seeing her last semester. She was the one who had to sign for it. She had to explain how it would be beneficial and what was needed. There was some paperwork from Housing that I had to do.”

Since then, Citak has found it comforting to have her cat living with her. She explains how nice it is to “have someone around.” She explains that, as she does her homework, Zoee will sit next to her allowing her to feel more relaxed.

“It’s just like a happy thing,” Citak said. “It’s something that cheers up your day a lot. I was studying a ton that semester. I would spend hours and hours in my apartment and it got really lonely sometimes. Just like to have her there is really nice.”

Citak wants to use every opportunity she can to advocate for mental health and making those suffering from it visible.

“This would be a really good opportunity to not be ashamed of whatever you’re going through,” Citak said. “I just wanted to do my little part of helping with [getting rid of] that stupid stigma. Yes, I do have anxiety, and I go see a counselor, but I feel like more people should do that and shouldn’t be weird about that.”

Citak said just having Zoee living with her in WKU housing opens up conversations about mental health.

“Sometimes it does feel awkward to be like ‘Oh she’s actually a service animal … ’ I have to explain that I go to counseling, but I’ve gotten more used to that now, and I feel like more people should know about it,” Citak said.

As a Pre-Med student, Citak stresses the importance of viewing mental health as importantly as physical health.

“I want to be a doctor one day so I’m going to be pounded with information about the physical body and how to treat patients physically,” Citak said. “But I don’t feel like people put enough importance on mental health.”

Citak still sees hope in the future for the discussion of mental health.

“I feel like it’s on the rise and it’s getting better,” she said. “Like I said, that was one reason I wanted to do this. I wanted to give my two cents and contribute to that.”