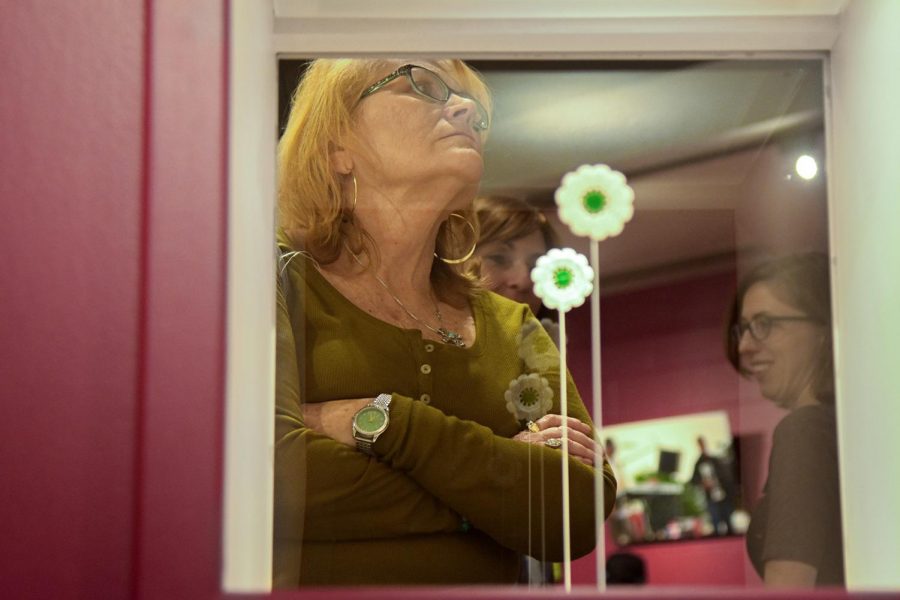 Nita Rice inspects articles at the Kentucky Museum during the opening of the Bosnian exhibit, “A Culture Carried: Bosnians in Bowling Green”, Friday, Sept. 29. The exhibit pays homage to the thousands of Bosnian refugees who came to the U.S. during the Bosnian Civil war. “I’ve always been interested in the culture,” said Rice, she’d always had Bosnian neighbors, and her children went to school with Bosnians.

On the opening night of the Kentucky Museum’s newest exhibit, “A Cultured Carried: Bosnians in Bowling Green,” almost 300 guests gathered in the small museum to look, observe, listen, taste and learn about Bosnia’s culture and history.

The exhibit contains several objects and visuals ranging from items carried by Bosnians who fled to America during the war to a replica of a Bosnian living room. The museum offers a blend of the country’s culture and also the history of the war that took place from 1992 to 1995. Live Bosnian music and refreshments were also offered for the guests on opening night.

At the entrance of the exhibit there is a simple plaque hanging on the wall with a quote on it: “Everybody’s story is unique, we all have our own individual stories…” This quote came from Denis Hodžić, the individual who is considered the catalyst of the exhibit.

Hodžić, a graduate student at WKU, and Brent Bjorkman, a WKU folk studies professor and director of the Kentucky Museum, met each other back in the spring of 2015 at a Sears where Hodžić was working at the time.

While Hodžić was ringing up Bjorkman’s purchase, he recognized the origin of his last name. Through their casual conversation, Bjorkman realized the need to share the powerful stories of the Bosnian community to the larger Bowling Green population.

“Most people that I know in my world have never been through anything like the thing that a lot of these [Bosnians] have seen and experienced,” Bjorkman said.

Shortly after their initial encounter, Bjorkman and Hodžić gathered a group to start working on the Oral History Project, which took form as a museum exhibit. According to Bjorkman, about 26 months of work had been put into creating the exhibit.

Hodžić, who moved from Bosnia to Bowling Green with his mother as a toddler, has also felt that many Bowling Green residents don’t know how huge the Bosnian presence is in the city. He said people usually react with shock when he tells them that about 10% of the population is Bosnian.

Hodžić hopes the museum informs people about Bosnian culture and show similarities between theirs and American culture. But more importantly, he hopes people will know and empathize with the struggles many Bosnians faced during the genocide and what it took for them to reach America.

“There are cultural aspects like the food, the dance, the clothing, foodways, music, but then there are also stories because that type of impact cannot be underexpressed,” Hodžić said.

A sense of pride and excitement filled the museum that evening. Many at the exhibit came due to various reasons and connections. Roxanne Spencer, a Bowling Green resident, came wanting to learn more of Bosnian culture after meeting some Bosnian Muslim women at a meeting held at the Islamic Center of Bowling Green.

“They all mentioned the war … and I thought, ‘I need to learn more about this,” Spencer said.

Nashville resident Sead Dzelil, whose sister and mother contributed to the exhibit, felt it did an excellent job at showing the tragedy, but also the happier parts of their country.

“Everything is done extremely well,” Dzelil said. “A bunch of happy and sad emotions, which I think is one of the points of an exhibit like this.”

Brent Bjorkman plans to continue the Oral History Project, and he said the exhibit does not signify an end to the project.

This exhibit shows to Bowling Green who the Bosnian community is and what they’re about, but at the same people like Hodžić believe there are still more stories to be told.

“This is just a small glimpse of the Bosnian community of Bowling Green … there’s over six thousand people that are Bosnian in this city and everyone has a unique story,” Hodžić said.