Devon Key steps up as an unexpected surprise 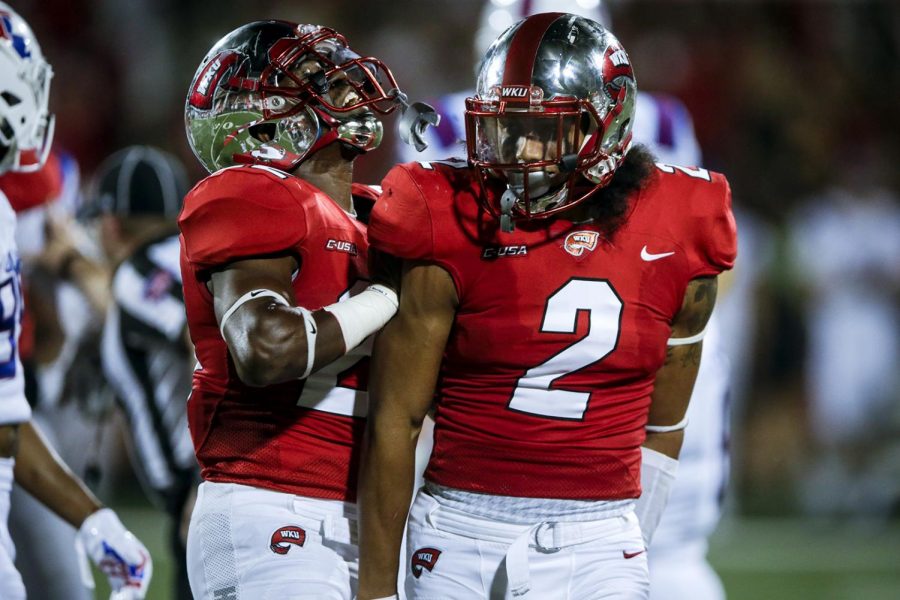 WKU defensive Devon Key celebrates with his teammates during the Hilltoppers' 22-23 loss to Louisiana Tech University on Saturday Sept. 16, 2017 at L.T. Smith Stadium.

When it was unclear whether or not graduate senior safety Marcus Ward would be healthy for WKU’s season-opener against Eastern Kentucky, a certain player’s preparation met his opportunity. Out of all the candidates, redshirt freshman safety Devon Key would be the one to earn his chance, as head coach Mike Sanford announced the week of the season opener that Key would be the starter.

Throughout the 2017 offseason “Pursuit”, Key recorded the fastest times in the 3-cone drill, 10-yard dash, short shuttle drill and highest vertical out of all the team’s safeties.

“It was a little surprising just because they told me the week of the first game,” Key said about being named the starter. “But I put in the work in all throughout camp, so I felt like I was ready to be the starter.”

Key earned the starting spot and hasn’t looked back since. In the season opener against EKU, the Lexington native recorded eight total tackles, just one tackle behind matching the total of the Hilltoppers’ leading tackler Joel Iyiegbuniwe.

In the following week, Key got his first taste of playing against a Power 5 team as WKU traveled to Illinois. Although the Hilltoppers lost the game 20-7, the WKU defense gave up just 13 points (one of Illinois’ touchdowns came on defense) as Key led WKU with 12 total tackles, including six solo tackles. Altogether on the season, Key is currently second on the team in total tackles with 32, again falling just one tackle shy of Iyiegbuniwe’s 33.

“It’s always good as a linebacker when you know you have a safety that’s going to clean things up for you,” Iyiegbuniwe said. “I personally don’t try to miss too many tackles, but when it happens it feels good to have Devon back there to clean things up.”

Although Ward is close to being back to full strength, don’t expect Key to vanish from the field anytime soon. With Key’s impressive play through the first four games, Sanford plans to utilize both safeties as much as he can.

“What’s helped Devon Key recently is the re-emergence of Marcus Ward. They have a great relationship,” Sanford said. “They play the same position. What Marcus brings from a leadership standpoint is a really good compliment to what Devon Key does. It also keeps Devon in a position where he isn’t playing 80 snaps a game.”

During the 2015 season, Ward started all 14 games at strong safety for the Hilltoppers. The Birmingham, Alabama, native tallied 57 tackles, including 7.5 tackles for loss as well as two sacks. During the 45-28 win over Southern Mississippi in the 2015 C-USA Championship, Ward forced a fumble that led to WKU’s go-ahead score in the third quarter. He was one of only five Hilltoppers to record a tackle in all 14 games that season.

As a result, Ward was named a team captain and earned Preseason All-C-USA Second Team heading into the 2016 season. However, a knee injury against top ranked Alabama ended his senior season, and he was granted a medical redshirt. Although he redshirted during his first season, Key said learning under Ward and former WKU safety Brandon Leston helped develop his game into what it is today.

“I just tried to learn based on what they do,” Key said. “They had a lot of experience going in being starters for multiple years. Since Marcus has came back, I’ve just been learning from him. He’s given me a lot of tips.”

Ward will look to work his way back onto the field, but it appears WKU has found its guy at safety for the next few years even after Ward’s eligibility expires. The WKU defense has given up just 20.3 points per game in 2017, a step up from last year’s 24.5 PPG allowed defensively. Key and the WKU defense will look for another strong performance this Saturday against Charlotte in the Hilltoppers’ homecoming game.