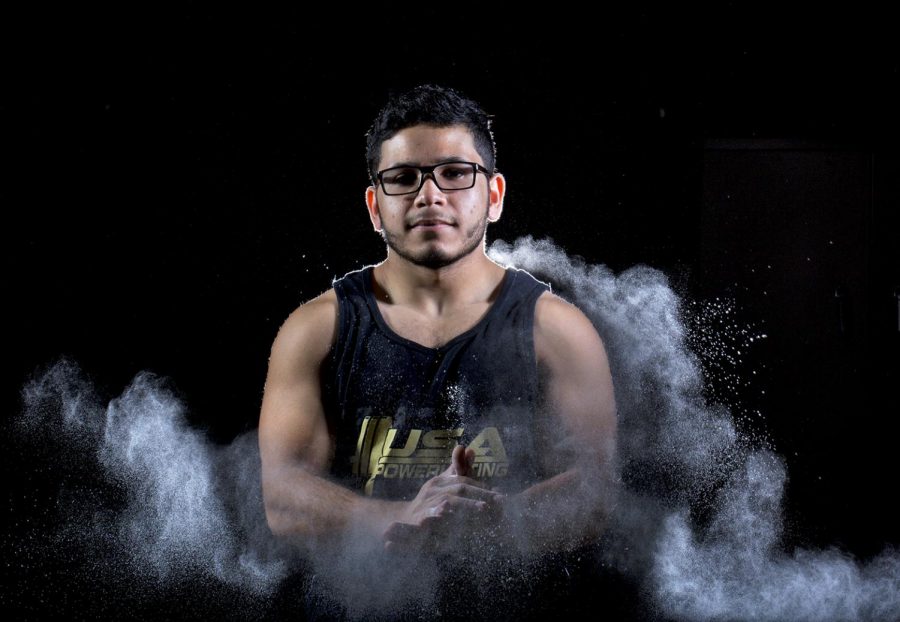 Sophomore Jadier Rivera from Hopkinsville won fourth in the National Weightlifting competition in Orlando, Florida in October. "At the end of the day you're there to beat yourself and you're your worst enemy," Rivera said. Rivera works out five days a week and for about an hour. "It's one of those sports you have to really have a huge heart for."

Jadier Rivera didn’t originally feel a lot of pressure going into the USA Powerlifting national meet in Orlando. Nervousness, yes, but he told himself no matter if he received first place or 31st place, he was determined to have a good time.

“I’m there to beat myself,” Rivera said.

Then he noticed his position on the jumbo screen and was shocked to learn he had placed fourth in his weight class—only 2.5 kilos under the third-place winner.

This was a huge accomplishment for Rivera, a relative newcomer to the world of competitive powerlifting.

A sophomore from Hopkinsville, Kentucky, Rivera said he first fell in love with lifting through training for other sports in high school. He didn’t consider powerlifting seriously as a competitive sport until he started attending WKU and met other powerlifters who convinced him to begin his training.

At his first meet, an unsanctioned competition through the Bowling Green Parks and Recreation department, Rivera didn’t even have a coach. Derek Brockman, a personal trainer at the Preston Center, approached Rivera at that meet and reached out to him to continue his training.

Rivera attended another unsanctioned competition at WKU in order to get a better feel for the sport before starting to compete at a higher level.

This summer brought the Kentucky State Championships in Louisville. Rivera was given his first chance at a sanctioned competition — performing so well he qualified for the national meet in Orlando this month, where he placed fourth.

“At first, I took a step back because I thought, could I be competitive at this?” Rivera said. “After doing some research and looking at the numbers from previous years, I felt like it would be a good idea to do [nationals], just to have the experience of a serious competition.”

“I figured I might as well give it a shot and see what happens,” he said.

Competitive powerlifting differs from other weight class-based sports such as Olympic weight lifting and bodybuilding. Competitors participate in three events: bench press, squat and deadlift. They are given three attempts at each event, and a total is taken from those best attempts.

Rivera says powerlifting is also a very fast-growing sport. One competitor told him the number of powerlifters at nationals was a few hundred, but this year Rivera estimated over one thousand people competed.

Training for the sport can get very intense, with powerlifters maintaining a strict workout schedule and paying close attention to their diet.

Rivera trains five days a week, alternating between the Preston Center on WKU’s campus and Bowling Green Powerhouse, a strength and performance training facility. He says his workouts usually last between 45 minutes to an hour.

“Sometimes, I just want to go, go, go,” Rivera said. “But I have to take a step back and rest, because it’s so important to not overexert yourself. You want to go to the gym, of course, but you also need to rest, eat and take care of yourself.”

Staying within the weight class is vital, especially near time to compete. One change in a weight class can make a huge difference in how a competitor performs and places.

“It was pretty difficult to explain to airport security as to exactly why I had a scale in my backpack,” Rivera said, “But that’s what comes along with the sport.”

Looking forward, Rivera is in a rather unique position regarding competitions. His fourth place performance in Orlando has already qualified him for next year’s national USA Powerlifting meet in Spokane, Washington. Rivera said he and his coach are still working to figure out what his next move will be, either taking a year off to focus on training or continue to compete in smaller meets throughout the year.

But he doesn’t see an end to competition anytime soon. His sights are set on larger competitions, such as the Arnold Sports Festival and the International Powerlifting Federation Competition.

But for now, Rivera is focusing on resting after a taxing season preparing for competition.

“It’s a sport where the term ‘it’s a marathon, not a sprint’ definitely applies,” Rivera said. “I’m still definitely trying to learn that.”