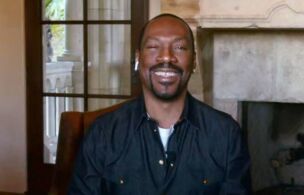 Oprah pulls in another giant star for an in-depth talk, this one a comedy legend. Eddie Murphy has been announced as the latest guest on the TV mogul’s Apple TV+ talk show The Oprah Conversation. The Coming 2 America star’s big interview will air Friday, April 9, on the streaming service.

The actor and comedian follows on the heels of the Conversation‘s Amanda Gorman interview and, of course, after the many bomb-throwing reveals of the CBS special Oprah With Meaghan and Harry. In the often uproarious discussion, Murphy opens about returning to stand-up, whether he was apprehensive about doing a sequel to his hugely successful 1988 flick Coming to America (Amazon’s Coming 2 America, also starring Arsenio Hall, Leslie Jones, and Tracy Morgan), and more.

As for the remake, he admits that people close to him warned, “Don’t mess it up,” and that he took four years to write the script “to make sure it was right.” Winfrey also probes the star on the tabloid gossip that covers his every move, diversity in Hollywood, cancel culture, being a father of 10 (and a grandfather), and whether he has ever changed a diaper. “I’ve bought a lot of diapers,” he says.

The pair talk via video link due to the pandemic, and Murphy also speaks about life during COVID. And he gives insight into his stand-up process, revealing that he makes voice notes on his phone of things that make him laugh: “I’ve got hundreds of little things in my phone that I have to put together and give some structure.”

When Winfrey asks if he tries out the lines on friends before using them on an audience to ensure they’re good, Murphy quips, “How do I know it’s funny? If I came up with it it’s funny, because I’m funny.”