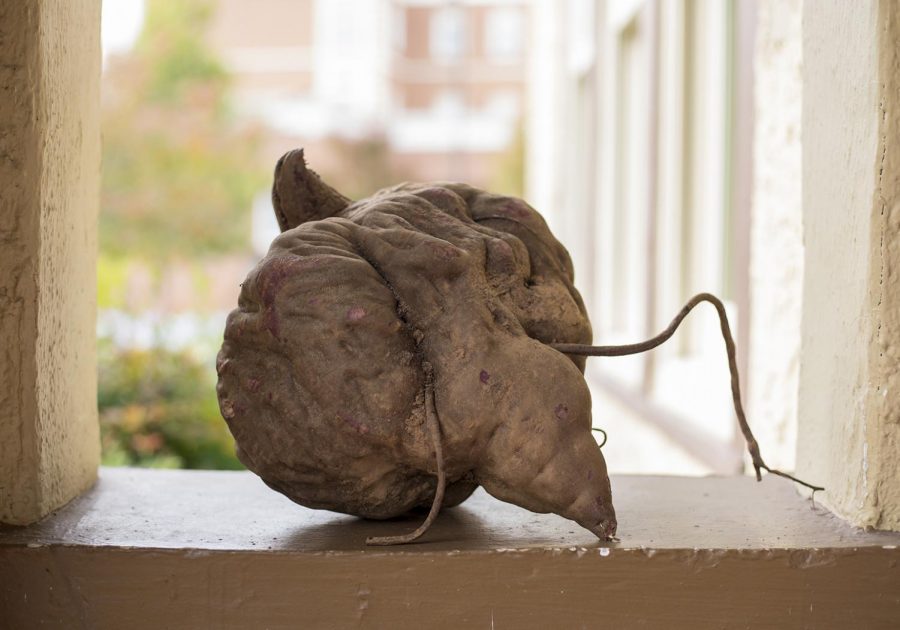 WKU's Agriculture Department acquired a 19 pound sweet potato over the weekend to study for science and then later make into floral arrangements for a baby shower.

When Jennifer Anderson and her husband, Spencer, began harvesting their sweet potato crop three weeks ago, they weren’t expecting anything special. It was their third time growing the vegetable, and so far, the results had been only ordinary.

This time, though, they were anything but. Among the roots they unearthed was a colossal sweet potato initially weighing in at 19.78 pounds. As a point of comparison, the average size for a commercially sold sweet potato is four ounces, or a quarter of a pound—almost 80 times smaller than the one grown by Jennifer and Spencer Anderson.

Gardening is an amateur activity for the Andersons, and they grow their vegetables in the backyard of their Bowling Green home. They picked up the hobby about a decade ago.

At first, the Andersons were unsure of whether to get their potato officially weighed and registered. The excitement and buzz led them to seek out Ryan Quarles, the Kentucky commissioner of agriculture, for official weighing and verification of their root vegetable. Almost a week after its harvest, the potato weighed 19.17 pounds.

Anderson said the disparity between the initial and official weights could be chalked up to water loss as a result of the dehydration that occurs when produce is removed from its plant.

“As it sits out, it kind of dries,” Jennifer said.

The drying is caused by the hypertonicity of the potato to the air around it.

At any rate, there’s no denying the sweet potato’s abnormal mass is a rarity–in fact, its weight is the largest recorded in the state by the Kentucky Department of Agriculture. A question many have is exactly why this sweet potato, in particular, grew to such a size.

“I don’t think we did anything different,” Jennifer said. “We always get compost from the [WKU] Ag Department, so that might have helped.”

While the gargantuan potato was a unique type–the Molokai purple sweet potato, native to the Hawaiian islands and not especially known for enormity–Anderson doubted her vegetable’s immensity stemmed from its species.

Also, she and her husband concoct a compost tea for her garden, which Spencer said in an interview with WBKO “might have to become a tradition.”

She also said she attributes the unusual size, at least to some degree, to the weather, referencing the warm summer and mild, rainy fall the city has been experiencing.

As for what to do with the massive sweet potato, Anderson said it has already been donated to the WKU Department of Agriculture, although no firm decisions have been made there on what to do with it. It is likely that research will be conducted on the vegetable.