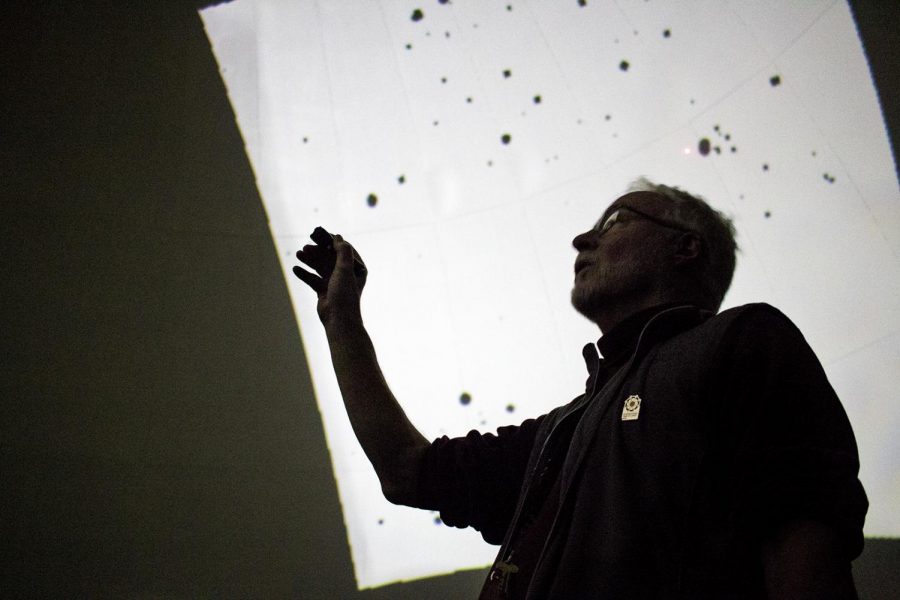 Planetarium Coordinator Ronn Kistler points out constellations during the Starry Tales for a Winter Night show at the Hardin Planetarium on Jan. 24, 2017.

For nearly 50 years, Hardin Planetarium has been serving WKU and the Bowling Green community by rotating series of shows focused on the night sky and the solar system at different times of year.

Dedicated on Oct. 14, 1967, the planetarium boasts over 10,000 annual visitors, and its features include a star chamber with a 110-person capacity, where shows are held, and a surrounding ring of educational and interactive exhibits about moon missions, Mars rovers and more.

The planetarium’s uniqueness stems primarily from its focus on interactivity. A typical show spans about 60 minutes and includes a basic introduction to the major constellations visible during the season, and it involves the audience members by engaging them in exercises in creativity and critical thinking.

The fall series, “Finding Your Way around the Autumn Sky,” focuses on identifying the positions of constellations at night during the current season. Each show opens by grounding the audience in its time and place, which in this case is Bowling Green on a mid-October evening, around 10 p.m.

The presenter indicates the position of the North Star, or Polaris, and Ursa Minor and Ursa Major, commonly known as the Little Dipper and the Big Dipper, as well as a number of other prominent patterns of stars.

Then, each group of attendees receives a star map and is assigned a constellation. The group agrees on what the constellation resembles (anything from an everyday object like a gas pump to something very out of the ordinary—a tentacled alien, for instance) and generates a story to explain how it found its way into the sky. Ideas are shared with the rest of the audience, and the presenter then discusses the actual name and figure of the constellation, as well as its historical importance.

Hardin Planetarium offers three weekly shows: Tuesdays and Thursdays at 7 p.m. and Sundays at 2 p.m. Each show is free and open to the public, and no tickets or reservations are necessary to attend.

Attendees include people of all ages—there are no age limits in place, and even very young children enjoy finding shapes and characters in the constellations and thinking up origin stories to accompany each figure, while physics and astronomy students can connect what they see in the show to the material they learn in class. Adults can enjoy identifying the constellations and making connections between those found in the star chamber and the stars outside.