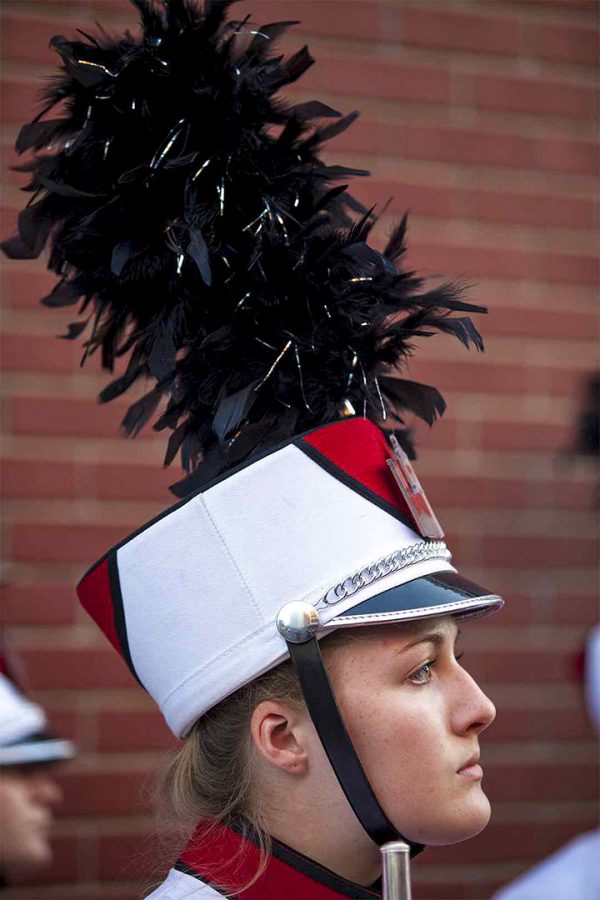 Hopkinsville freshman Emily Jeffords listens to the band director during the Big Red Marching Band's practice before the game on Thursday outside Smith Stadium. Shaban Athuman/HERALD

On a Monday afternoon as students are finishing up their classes, the WKU Big Red Marching Band is just preparing for a refresher on its half-time show for mid-week rehearsal. The weather is humid, but that doesn’t stop the members of the BRMB from giving their all as they go over each set of marching drill.

The marching band takes one week before the start of the fall semester to learn the season’s halftime show. During the semester, the students are enrolled in the class where they practice every Monday, Wednesday and Friday for two hours to reinforce the marching drill they learned.

The BRMB is one of the larger communities of students on campus, totaling at around 250 members this season. The marching band is more than just a time filler for halftime at the football games. They cheer on the Toppers to help them reach victory and bring more pep and excitement to the games.

Owensboro senior Cory Burdette, a history and social studies double major, commented on what he loves most about being in the band.

“For me it would have to be the crowd appreciation,” Burdette said. “Whenever we play the Fight Song, they always join in and sing along. I love being in the BRMB. Because of my experiences, I will have memories that I can look back on, and I have made friendships that will last a lifetime.”

The size of the BRMB has grown considerably during the past years. The band is the largest it has been in WKU history. Associate Director of Bands, Jeff Bright, said that 70 percent of the marching band are non-music majors.

“We have over 60 different majors within the group,” Bright said. “I’ve been the associate director of bands here at WKU for 11 years now. My philosophy is marching band should be open to all people who enjoy that activity. We are the most diverse group on campus.”

The band is often seen on Monday, Wednesday and Friday afternoons practicing on South Lawn, or in the football stadium for upcoming games. According to Bright, a lot goes into planning for the week of football festivities.

“I have a checklist for every game,” he said. “I make sure every student has an itinerary for game day at the beginning of the week. We make arrangements for our meal in Fresh Food, and we prepare the video cameras to record the show.”

However, Bright said planning for the weeks ahead is not the hardest part of being associate director of bands.

“Choosing the music for the year is the hardest part,” he said. “If students don’t enjoy the music we’re playing, it makes it harder for them to learn it. I usually send out ideas to students and get a lot of feedback in return.”

This season’s halftime shows are all about dance, including a disco halftime show which will be showcased later in the football season.

Despite all the hard work that goes into preparing for halftime, the students still return the following fall. Tavares, Florida, junior Heather Connolly expressed why she keeps coming back.

“I love the camaraderie between the different groups,” Connolly said. “Being in the band means I will always have a safe place to go when I’m on campus.”

Moreover, the marching band provides leadership skills that can be valuable for the future. Drum Majors Molly Bell and Dylan Glass noted that being able to conduct the band in front of a large crowd will help them hone their craft for when they become high school band directors.

“I want the chance to make a positive impact on those around me,” Glass said.

The next time you attend a WKU football game and want to get that pretzel during the halftime show, thinking you won’t miss anything, think again. Stay for the musical stylings of the Big Red Marching Band and you might be in for a pleasant surprise.