EDITORIAL: No quick fix to our gun violence issue 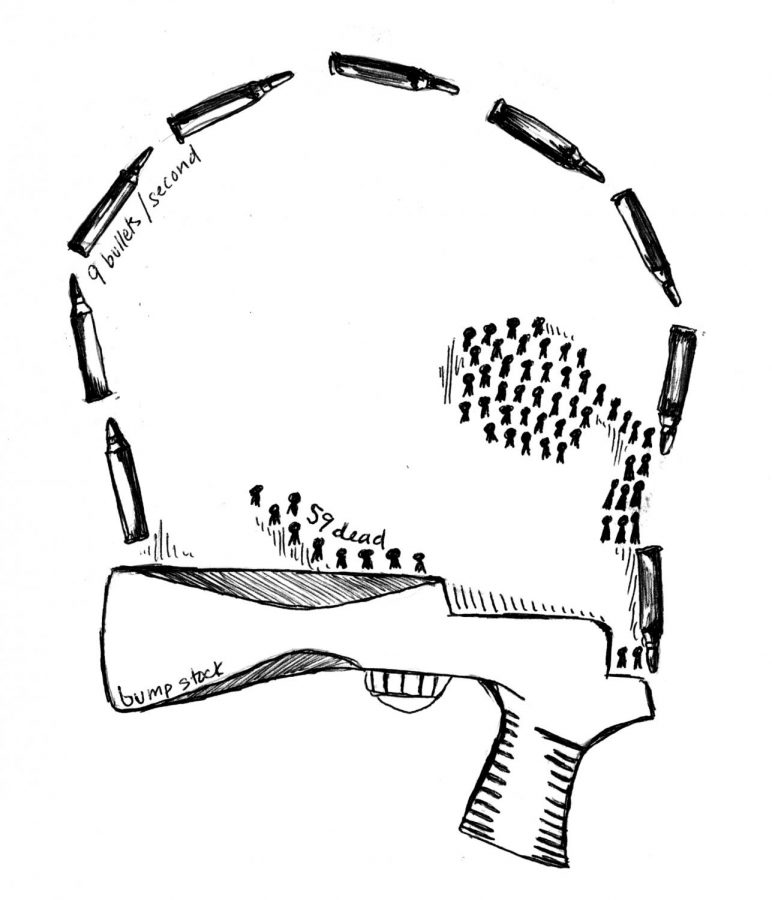 The Issue: The National Rifle Association, the most staunch advocate for civilian gun ownership, appears to have softened its hardline stance against any form of gun control after the tragedy in Las Vegas. Specifically bump stocks, which are cheap devices used to increase the firing power for semi-automatic weapons, now have serious potential to be banned.

Our Stance: Gun lobbyists have manipulated their political influence in the Republican party for years and this weak attempt at addressing the issue likely won’t even pass into legislation. There needs to be a serious bipartisan effort in the federal government to ban civilian ownership of assault weapons. Gun regulation is not a “simple fix” to this complex issue, but it is a legitimate place to start. If that means taking baby steps and banning accessories like bump stocks then so be it.

One of the few things that we as a nation seem to agree on completely is that all forms of senseless violence are wrong. This manifests itself in our country’s unified reaction to gun-related tragedies such as Sandy Hook, the Orlando night club shooting and most recently the Las Vegas massacre.

It’s a few days after these events take place when everyone starts going in separate directions. Some people think that having more concealed carry license holders who are trained in the proper use of firearms will deter potential criminals from killing innocent people, knowing there could be retaliation. Others believe massive gun control, which would stop criminals from gaining access to these assault weapons in the first place, is the solution.

Then there are those like Rand Paul, who was recently shot at during a Congressional baseball game where another senator almost died due to gun shot wounds, who think gun violence is a spiritual problem and that people are the issue rather than the weapons they use.

There is one thing that is perfectly clear: the NRA’s disgusting manipulation of Republican politicians and voters must end if there is to be any serious bipartisan discussion on real solutions to our country’s gun violence issue.

Surprisingly, Republican lawmakers have announced they would not oppose tighter regulations on bump stocks: the gun accessory which allowed the Las Vegas shooter to fire semi-automatic weapons almost as rapidly as fully automatic guns.

Not so surprisingly, the NRA has stopped short of supporting a legal ban on bump stocks, citing the issue can be addressed without a ban if the ATF, Bureau of Alcohol, Tobacco, Firearms and Explosives, would do its job and reverse specific rulings that legalized these devices.

The Violent Crime Control and Law Enforcement Act of 1994 prohibits the manufacturing of assault weapons for civilian use, but it only applies to weapons manufactured after the enactment of the ban. This means essentially anyone can gain access to assault weapons manufactured before 1994 and can do it relatively easy since most states don’t require background checks for firearms purchased privately at gun shows.

What the NRA and some Republican politicians don’t seem to understand is that certain rights have to be given up for the sake of public safety. No civilian has any valid reason to own an assault weapon. If banning bump stocks and other gun accessories is a step in that direction, then there needs to be a serious federal effort to make this happen.