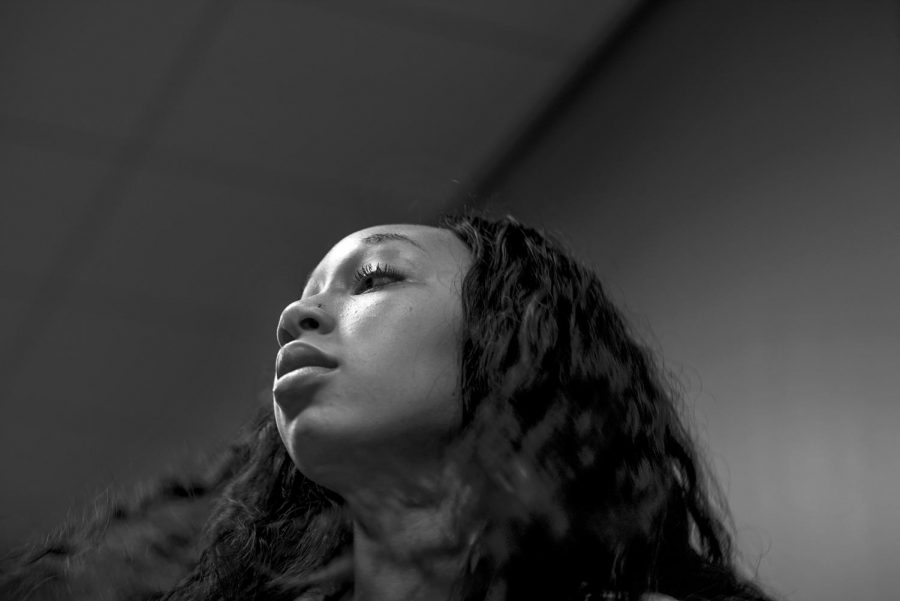 Melody Dickerson practices with the Major Redz, a Majorette-style dance team in Bowling Green, Kentucky. Dickerson, who started dancing at age 5, came to the university from Memphis to dance here.

After midnight on a Tuesday, Melody Dickerson danced with her friend Paige Henderson in Zacharias Hall. With the dorm room beds pressed against the wall, the pair used the center of the room as their dance floor. Mirroring routines that played on an open laptop, they demonstrated different moves for one another, ultimately crafting an 8-count routine for their team’s next practice.

Dickerson and Henderson are both members of the Major Redz, a majorette-style dance group at WKU. The group is a student organization not officially sponsored by WKU, meaning they are responsible for funding themselves and planning things like uniforms and routines. They are often seen at football games and other campus events. According to their Facebook page, they aim to “innovate, inspire, entertain and spread diversity” throughout WKU through the art of dance.

According to Jessica Jackson, the Major Redz coach, the group was modeled after similar groups at Historically Black Colleges and Universities. Now, Jackson said it’s about more than diversifying WKU – it’s about individual growth.

“The Major Redz started to bring diversity to campus and to give black women a place at WKU,” Jackson said. “Now, since I’ve been coaching, we focus on personal growth. Our team grows from the inside out.”

One dancer who exemplifies this growth is Dickerson, Jackson said.

“Since she started, she’s [come] out of her shell,” Jackson said.

A sophomore from Memphis, Dickerson has 14 years of dance experience. She is majoring in family studies and minoring in dance. Dickerson said she has danced her whole life, but her earliest recollection is at age 5 after watching her older sister, who was a dance coach.

Dickerson danced competitively in middle and high school and had experience in multiple genres, including pom and hip-hop. Since beginning college, she has also been the assistant coach for the Warren Central High School dance team.

Dickerson said she decided to try out for the Major Redz after seeing the group perform at the first WKU football game she attended.

“Ever since I saw them, I went to every game,” Dickerson said. “I really liked watching them.”

Versatility wasn’t the only reason Dickerson decided to join the Major Redz, though.

“I wanted to be in a sisterhood,” Dickerson said.

She called the group “supportive” and said they have encouraged her to do things she wouldn’t have otherwise, like trying out for the Miss Black & Gold pageant. Dickerson also said she has made many friends within the group, including Henderson, who is also a sophomore from Memphis.

The two met during Major Redz tryouts and coincidentally were placed in the same residence hall. They spend most days practicing routines or creating new choreography — “homework” for the Major Redz.

“Most days, we dance,” Henderson said. “Everywhere, sometimes in the Chick-Fil-A line.”

Henderson said their dance styles complement one another, and through the Major Redz, they have become good friends.

“Melody is really loyal to her friends and to her team,” Henderson said. “She shows dedication in everything she does, from choreography to friendship.”

After graduating, Dickerson said she hopes to appear on Broadway or be a backup dancer. Either way, she said the Major Redz have prepared her for the next step.

“I’ve gotten to try new styles and experiment with different techniques,” Dickerson said. “I’m in it for the growth.”