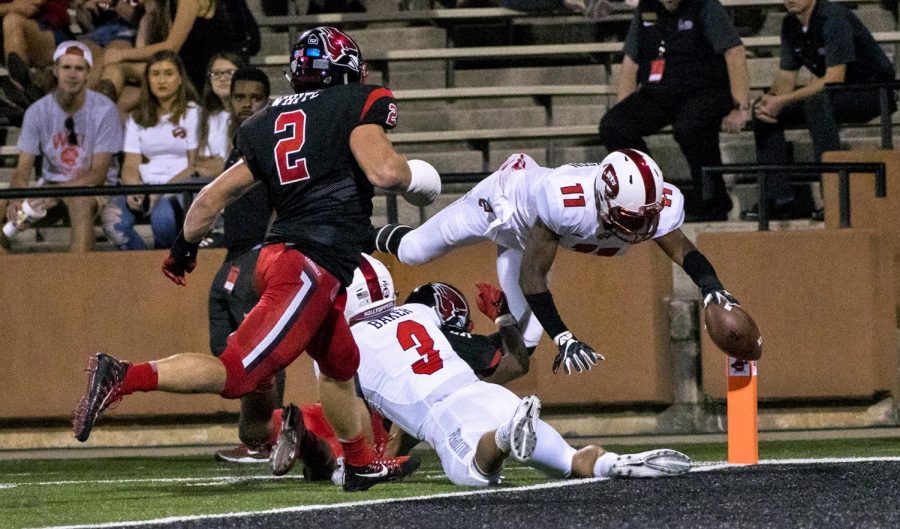 WKU wide receiver Lucky Jackson (11) dives for a touchdown during the Hilltopers' 33-21 win against Ball State on Saturday, Sept. 23 at L.T. Smith Stadium.

The WKU football team through five weeks isn’t quite the team many predicted to see before the season began. Last Saturday, the defending Conference USA champions went on the road against a winless Texas El-Paso team, whose closest game entering the contest was a 14-point loss, and squeaked out a 15-14 victory to move to 3-2 (1-1 C-USA) on the season. A 2-point conversion in the first half ended up being the difference in the Hilltoppers’ win.

If it weren’t for UTEP kicker Brady Viles missing all three of his attempts, WKU could’ve suffered arguably its worst ever C-USA loss and returned to Bowling Green 0-2 in C-USA play. Instead, WKU is tied for fifth in the C-USA East division but is just 1.5 games behind division leader Florida Atlantic (3-3, 2-0 C-USA).

“It’s early on, we still have a lot of football to play,” redshirt junior punter Jake Collins said on Monday. “We believe in these coaches, and we believe in each other. We’re going to get it together real soon. We found a way to win these last two games and we look forward to making this week the week we really get it going.”

After gaining just 74 yards on the ground in El Paso, the Hilltoppers currently rank dead last in the FBS in rushing yards per attempt (2.3) and 129th out of 130 teams in rush yards per game (76.4). Coming into the season, the running back group appeared to be one of the deepest positions on the roster. However, none of WKU’s four running backs have separated themselves from the others.

First-year head coach Mike Sanford mentioned last week he hoped the running game would get going against UTEP’s soft run defense that ranked last in the conference. However, the struggles on the ground continued. True freshman Jakairi Moses ran for just 50 yards on 19 carries against the Miner defense that gave up an average of over 200 rush yards per game. The offense was without sophomore running back Quinton Baker who did not play due to injury, and redshirt junior running back D’Andre Ferby who has been banged up throughout the year ran for 15 yards on four attempts. Both are expected to be back to full strength for Saturday’s matchup against Charlotte.

“I feel like we got a good win, but we have to work on some stuff to get better throughout the season,” Moses said. “We have to work on better communication in personnel running on and off the field and keep working harder and things will open up.”

Redshirt senior quarterback Mike White, who threw for 37 touchdowns last season, has thrown just two passing touchdowns to three interceptions through five games. The only FBS team with less than two passing touchdowns is Army who traditionally only throws the ball a handful of times a game within its triple option offense. Oddly enough, White has run for a team-high four touchdowns including both scores against UTEP after not running for a single touchdown last season. The preseason C-USA Offensive Player of the Year is averaging just 10.5 yards per completion, a step down from his 15.5 average during last year’s C-USA championship run.

“We’ve seen teams play man coverage on the outside, so we have to win those one-on-one battles down the field,” Sanford said. “We took seven downfield shots against UTEP and completed one, and that can’t happen because teams are going to continue to play man coverage and put seven or eight in the box. If we had hit three of those seven, then it’s a completely different football game because you’re going to end up getting a defense that’s afraid to give up the play down the field.”

One significant improvement has been on the defensive side of the ball across the board. The Hilltoppers are giving up just 19 points per game which ranks 27th in the nation and third in C-USA.

“We’re playing at a championship level from a defensive and special teams standpoint,” Sanford said. “We just have to score points offensively. Mike White did a good job of pulling a few of those balls down himself that led to two touchdowns. But we’re obviously not going to make our way by running our quarterback 15-20 times per game.”

The Hilltoppers host Charlotte Saturday for the annual homecoming game. The 49ers are 0-6 including a 35-31 loss to North Carolina A&T of the FCS level. Kickoff is scheduled for 3:30 p.m. in Houchens-Smith Stadium.