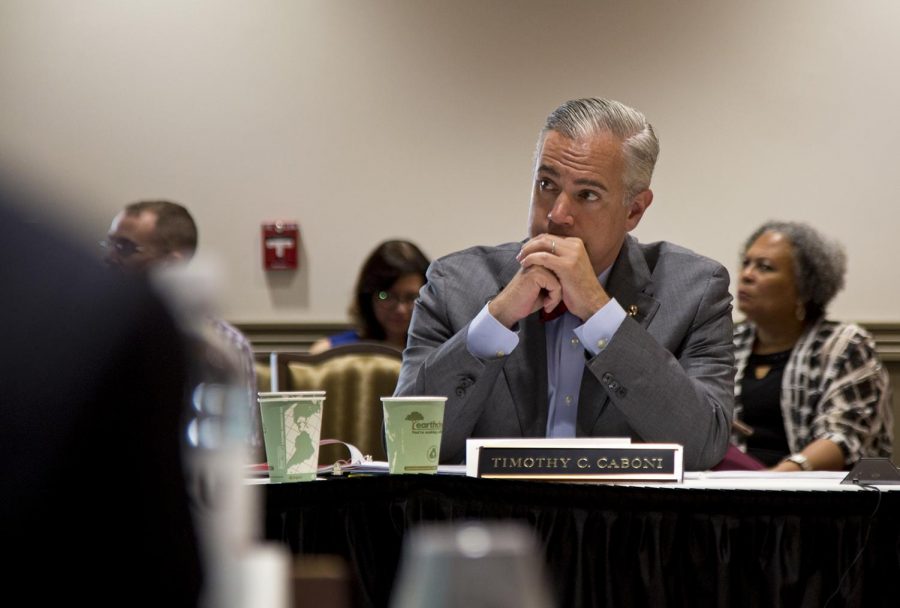 WKU President Tim Caboni attends the Board of Regents Meeting on Friday, Sept. 22 in Honors College and International Center.

The Board of Regents discussed the new diversity, equity and inclusion plan and the budget committee during its committee meeting last Friday, Sept. 26.

The diversity, equity and inclusion plan was presented by Lynne Holland, chief diversity officer on Friday.

Holland said diversity, equity and inclusion are not just values of the institution, but the entire Bowling Green community. She said the purpose of the plan is to create an environment where every student can be successful, which will lead to greater persistence and graduation.

“This institution can be a place where students can come and be successful,” Holland said. “I really want to be a place that is student-centered and embraces students and staff.”

With the plan, Holland said she hopes to create a “global village.” She said the plan will move away from specific “boutique” safe spaces on campus, and move toward making the entire campus a safe space.

Board of Regents Chair Phillip Bale said Holland’s vision for the campus is one the board can and will embrace. The plan will be voted on by the entire board at the next meeting, on Oct. 27.

Changes to the budget council were discussed during the finance and budget committee meeting. President Timothy Caboni said he has redefined the purpose of the budget council and hopes for a set of recommendations in February and to begin implementing ideas soon after.

Caboni said the new set of goals involve discussing budget models from other universities to be implemented at WKU, the performance based funding model, handling past and potential revenue shortfall that weans off the use of carry forward funds and realigning expenditure investments in a way to reward performance.

The carry forward policy previously allowed programs to determine how to use their unspent money in an upcoming fiscal term. Now, the budget is estimated to use $28,819,000 from carry forward funds to make up for any budget shortfalls.

“It is advisory to the president,” Caboni said of the budget committee. “But I’m pushing them for more advice than they may have delivered previously.”

Members of the academic affairs committee discussed new graduate certificates in biology and health education. Speaking on the new Health Education certificate, Caboni said it will provide flexibility in pursuing a Master’s degree.

Regent John Ridley, during a discussion on the certificates and colonnade courses, said these courses make students a good citizen of the commonwealth, which was discussed at Gov. Matt Bevin’s Conference on Post Secondary Education, which board members attended. Ridley said the job of the university is to not only get students job-ready but also make them well-rounded citizens.

“This is what makes American college education so special,” Lee said.

During the meeting, the board went into closed session to discuss the “future acquisition or sale of real property by the University,” according to the agenda. They discussed the transfer of ownership of several areas of land to WKU.

In the executive committee meeting, multiple property ownership changes were discussed and will go into effect if approved by the full Board of Regents at the October meeting.

Currently, there is property owned by the WKU Foundation on Nashville Road. This includes space in the Center for Research and Development building and lots near the building.

For a property on Normal Drive, the board authorized WKU to accept the transfer of 50 percent ownership interest from the WKU Real Estate Corporation, giving full ownership to WKU. The property was previously a house but was converted into additional parking in the University Boulevard lot.

The deed for the Suzanne Vitale Clinical Education Complex on Alumni Avenue was authorized by the board to be transferred from the WKU Real Estate Corporation to WKU. The space includes classroom, office and programming space.