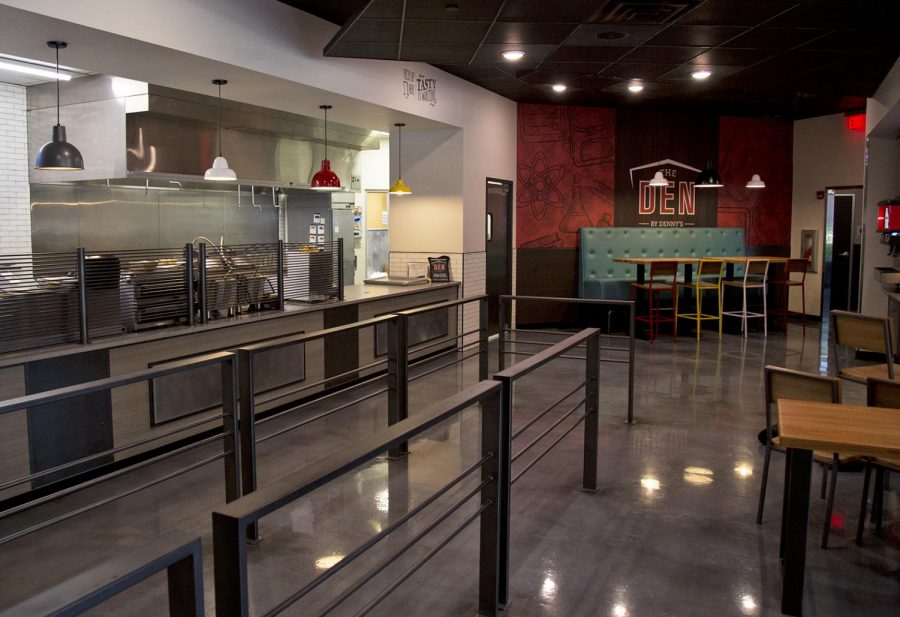 The Den by Denny's takes the place of Burger Studio, Popeyes and Freshens. The hours at Denny's range from 4 p.m. to 11 p.m. Sunday through Thursday and 11 a.m. to 3 p.m. Friday's.

The Den, WKU’s newest restaurant, is now fully operational after employees have completed the necessary training to run the restaurant, according to dining administrators.

Steve Hoyng, regional district manager for Aramark, said The Den was operating on “soft hours” when it first opened, meaning the restaurant was sometimes closed during the hours it was supposed to be open to allow for training.

He said the restaurant will be operating on its usual hours now that training for the employees has ended.

“It reminds me more of home,” Penny said as she waited for her restaurant pager to buzz.

Hoyng said The Den was chosen to replace Popeyes and Freshens because of the large variety of food offered in one restaurant.

Louisville junior Elizabeth Tatro said she likes the wide variety of food The Den has brought to campus, but she said she does miss the smoothies from Freshens. She said she also misses the variety of restaurants by PFT.

The Den is now the only restaurant near PFT. However, The Pit Stop Convenience Store remains open and sells a variety of food and groceries.

Tatro said The Den offered samples when it first opened, and she enjoyed that food, but the food she has ordered since then has not always been as good as she would have liked.

“The samples they gave out were misleading,” Tatro said, waiting for her to-go order.

Penny said her main complaint with the restaurant was the confusing hours. She said she has gone to the restaurant when it is scheduled to be open only to find that it is closed.

Hoyng said now that training is over, The Den will operate on its scheduled hours. He said the restaurant will be open from 4 to 11 p.m. Sunday to Thursday and from 11 a.m. to 3 p.m. on Fridays. The Den will be closed on Saturdays.

Hoyng said these hours were chosen because those times are when the previous restaurants had the most business.

“Sometimes I really want some chicken but it’s at 10:30 at night and Chick-fil-a is closed,” Hadfield said as she stood outside PFT. “So, then I just go to The Den.”

Hadfield said she eats at The Den four to five times a week. She said she has noticed the building is almost too small for the amount of business it does. She said she was in The Den once when it reached full capacity, and the door had to be closed to prevent more customers from entering.

Hadfield said that size of the building is her only complaint, and she has always experienced good service and a nice atmosphere whenever she has eaten there.