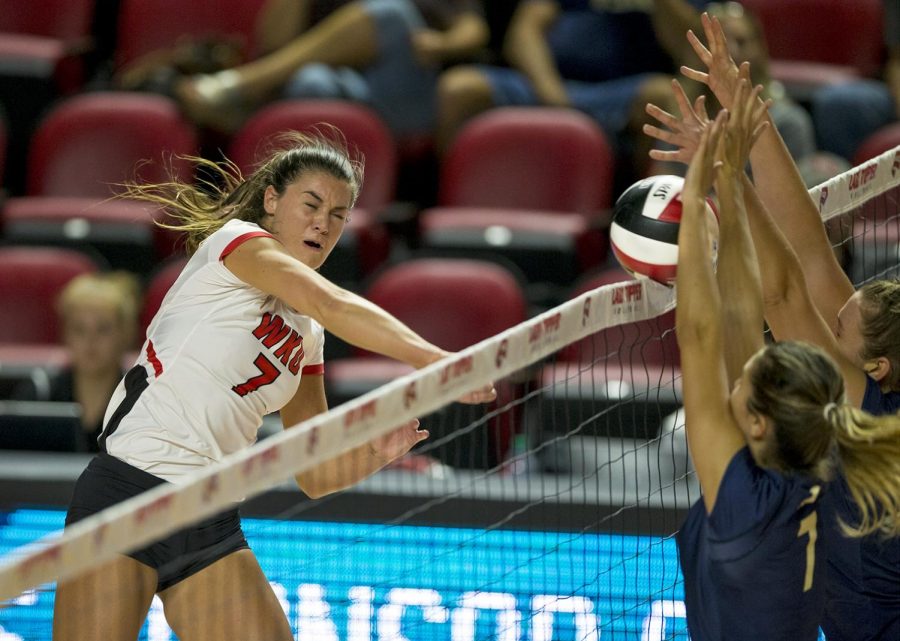 WKU senior Alyssa Cavanaugh (7) spikes the ball during their game vs. Pittsburgh on Friday, September 8, 2017 in Diddle Arena. This weekend WKU competed a tournament and Cavanaugh was named the tournament MVP.

The Lady Topper volleyball team continues its six-game road streak with a trip to Columbus, Ohio, for a three-match slate in the Buckeye Invitational Friday and Saturday at Ohio State University.

The challenging Friday slate includes matches against Ohio State at 11 a.m. and Dayton at 4:30 p.m. WKU will close out the weekend with a match against Northern Illinois at noon on Saturday.

Senior Alyssa Cavanaugh, who picked up tournament MVP honors, was named C-USA Offensive Player of the Week for the fourth time in her WKU career after racking up 59 kills on a .414 hitting clip.

The Lady Topper offense continues to put up winning numbers as the season rolls on, but WKU’s defense has been a brick wall to opposing offenses over the past week.

In the win over Pittsburgh at the Holiday Inn Invitational, the Lady Toppers picked up 23 total blocks as a team, nine shy of the school record of 32. Ten of those blocks came from redshirt junior Amara Listenbee, also just four shy of a new school record.

In Tuesday night’s win over Lipscomb, WKU totaled 14 blocks as a team including eight apiece from Listenbee and senior Sydney Engle.

The Lady Toppers will begin Buckeye Invitational play with a Friday morning match against host Ohio State (5-3), who has a 3-1 record on its home court this season.

Dayton, who the Lady Toppers will face for the night cap Friday afternoon, improved to 7-4 with a 3-0 win over IUPUI Tuesday evening.

The duo of junior outside hitter Lauren Bruns and senior middle blocker Amber Erhahon lead the Flyers as Bruns has tallied 129 kills on the season while Erhahon follows with 123 kills of her own. Senior setter Jane Emmenecker paces Dayton with 386 assists.

The Flyers are led on defense by junior libero Margo Wolf, who leads the team with 183 digs. Erhahon leads Dayton with 49 blocks.

The Lady Toppers will wrap up the Buckeye Invitational with a noon match against Northern Illinois (1-11) Saturday. The Huskies are coming off of their first win of the season, a 3-1 victory over Illinois State Tuesday evening.

Leading the Huskies is freshman outside hitter Kaylee Martin, who has a team-leading 120 kills on the season after picking up 25 in Tuesday evening’s victory over Illinois State.

After the Buckeye Invitational, the Lady Toppers will get a six-day break before beginning Conference USA play on the road at Florida Atlantic Sept. 22.