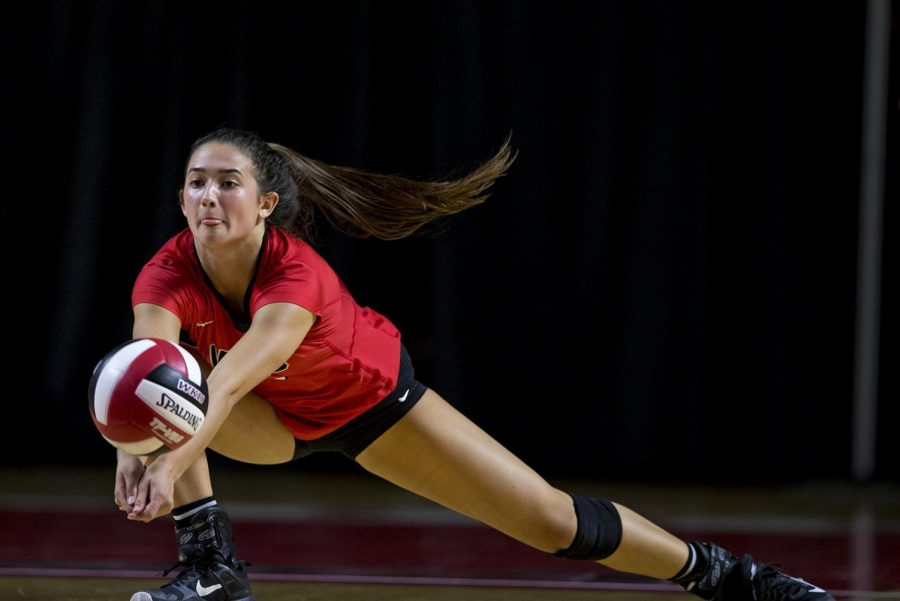 WKU sophomore Emma Kowalkowski (3) reaches for the ball during their game vs. Pittsburgh on Sept. 8, 2017 in E.A. Diddle Arena. The Lady Toppers won 3-2.

As the midseason draws near, defense has been a key storyline in the past few weeks for the WKU volleyball team.

As part of their current nine-game winning streak, the Lady Toppers have only lost four sets of volleyball since dropping a 3-0 decision to Illinois on Sept. 2.

While offense has been a huge part of the team’s success, the defensive numbers that have complemented them have been equally important.

In this weekend’s Buckeye Invitational, the Lady Toppers lost only one set while holding opponents to a combined .178 hitting percentage and scorching the opposition on offense with a .384 clip.

Since the loss to Illinois, the WKU defense has held opponents to a dismal .146 hitting percentage while hitting for a blistering .354 clip on the offensive end.

The last nine matches haven’t been the only good defensive performances for the Lady Toppers this season. Overall, the WKU defense has held opponents to a .183 hitting percentage on the season, out-digging opponents 624-518 and out-blocking the opposition 125.5-89.5.

Most of the defensive credit this season falls on the shoulders of younger players who have seen their performances on defense out-shadowed by the Lady Toppers’ video game-like offensive numbers.

Another player who has stepped up to lead the Lady Topper defense is junior Rachel Anderson, who has arguably been one of the most talented two-dimensional players in the nation.

Anderson has racked up a team-leading 57 blocks from her middle blocker position to complement 166 kills – good for second on the team behind Alyssa Cavanaugh – and a team-leading .385 hitting clip.

“Rachel could work on her blocking a little more,” head coach Travis Hudson told the Herald last week. “I believe that it is the only thing that is keeping her from being an All-American every season.”

Senior Sydney Engle has continued to be the glue for the Lady Toppers as she is second on the team in digs and blocks with 114 and 35, respectively.

Senior Amara Listenbee is third on the team with 30 blocks on the season. Listenbee made noise in the match against a good Pittsburgh team when she racked up 10 blocks, just four short of a single-match school record.

In that match, WKU totaled 22 blocks as a team while taking down the Panthers in five sets, 3-2.

“We inserted [Amara] in the lineup and she was big for us from a defensive standpoint,” Hudson said after the win over Pitt. “Pittsburgh is such a good team that you have to find a way to get stops, and we did that tonight.”

Besides making a name as arguably the best setter in Conference USA, Jessica Lucas has put up 110 digs on the season, good for third on the team. Lucas has also posted 28 blocks to come in at fourth on the team.

Cavanaugh, the offensive star, has chipped in 26 blocks on defense for the Lady Toppers.

In this weekend’s Buckeye Invitational, Anderson picked up tournament MVP honors after posting 43 kills on offense and nine blocks on defense, both team leaders. Cavanaugh and Lucas both earned All-Tournament honors as well.

Looking ahead, the Lady Toppers will use momentum from this weekend’s sweep of the Buckeye Invitational as they travel to Boca Raton to begin C-USA play at Florida Atlantic (8-3), who will also get a six-day break before welcoming WKU.