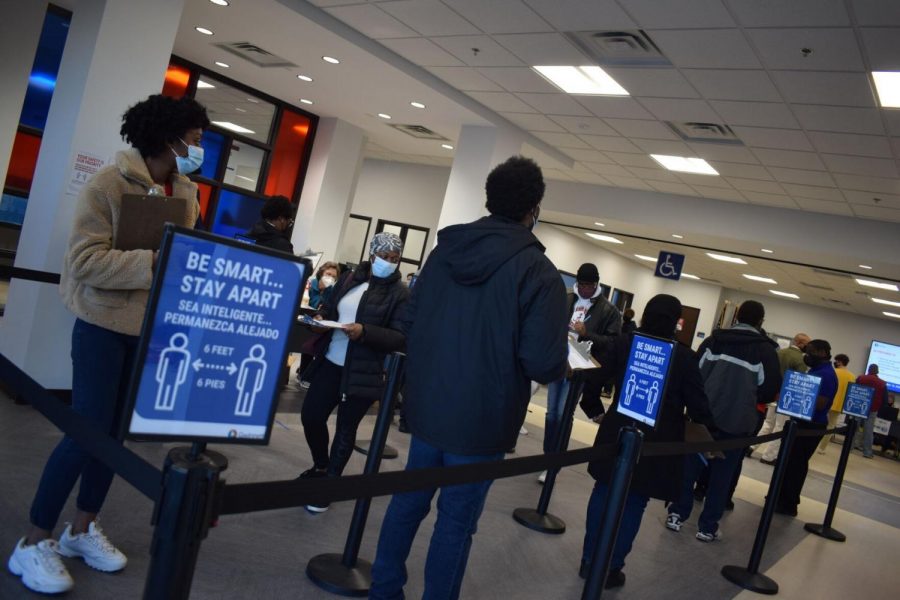 Voters wait in a line at the Gwinnett County elections headquarters in Lawrenceville to cast ballots during early voting for the Jan. 5 runoff election. Secretary of State Brad Raffensperger is defending the state's new election reforms, which critics have derided as voter suppression, that were recently signed into law.

Georgia Secretary of State Brad Raffensperger defended the state’s controversial new election reforms this past week by arguing they made voting both more secure and more accessible.

Raffensperger discussed the reforms during a telephone interview with the Daily Post, answering questions about how provisions of Senate Bill 202 would work and how some of those provisions might impact Gwinnett County voters. Proponents of the bill have argued it will make elections more fair and secure while opponents have argued some of its provisions will lead to suppression of voters, particularly in minority communities.

“I would say it provides the proper balance between accessibility with security,” Raffensperger said.

Georgia made headlines across the nation and overseas after the General Assembly passed Senate Bill 202 and Gov. Brian Kemp signed it into law last week. Voting and civil rights groups have already filed a lawsuit against the state to get it overturned and the Georgia Republican Party announced on Wednesday that it plans to intervene in the lawsuit as a co-defendant.

On Friday, Major League Baseball announced it was pulling this year’s draft and All-Star Game out of Atlanta because of the bill, and Delta CEO condemned the bill in a memo to the airline’s employees.

“There’s been an awful lot of over-the-top hyperbole about what this bill does or doesn’t do,” Raffensperger said. “It does several good things and I think people need to focus on that.”

But, during a virtual chat with Gwinnett High School Democrats on Thursday, state Rep. Donna McCleod, D-Lawrenceville, said the bill was “based on a lie” about the 2020 general election, in which Democrats made big strides in Georgia.

Former President Donald Trump led an argument by Republicans that there was fraud in Georgia’s election. Last year marked the first time since 1992 that a Democrat has won Georgia in a presidential race.

“I do not think legislators should be making laws or any kind of policy based on a lie,” McCleod said. “It’s dangerous for the constituents that we serve.”

Seventeen mandatory days of early voting, with option for up to 19 days

One of the aspects that Raffensperger touted concerning accessibility was an increase in the number of days of early voting that are required under state law. Despite the increased number of required days, however, the actual early voting window — which lasts three weeks — will remain the same.

“So, there’s more uniformity for all counties, but also more access for all voters,” Raffensperger said. “But, also because you have more access for early voting, we’re hoping that that helps reduce some of the capacity requirements that you’ll have on election day.”

In Gwinnett, however, both Saturdays and both Sundays were already used as early voting days in 2020.

“We have some counties that only have 3,000 peoples, so 17 days is probably plenty (but) we have other counties, however, that have a million people and they might want to have 19 days,” Raffensperger said.

But, despite Raffensperger’s assurances that the bill will expand voter access while increasing security, critics remain unconvinced.

Democrats have argued that rather than making elections more accessible, the new rules put in place by Senate Bill 202 will do the opposite.

Runoffs will now be held four weeks after the original election in stead of the nine weeks state officials agreed to put in place in 2013 after a federal judge ruled that the state wasn’t giving Georgia voters living overseas enough time to get ballots mailed in.

“They just made it a lot more difficult and put a whole lot more regulation on it that we have to study and adjust to it, and pay for it,” Hutchinson said.

The capacity requirements Raffensperger referred to deal with requiring counties to either split up election day precincts or start adding more staff for precincts where the wait time to vote exceeds one hour.

“Those are all good measures to make sure that voters aren’t in line for long periods of time,” Raffensperger said.

Hutchinson said the state is already losing money from moves in the private sector, similar to the one taken by Major League Baseball, but she also said there will likely be a deeper impact for counties like Gwinnett.

That impact is the cost of conducting elections, she said.

“Locally, it’s going to cost us more money to do all of the things that they’re asking us to do to suppress the vote in Gwinnett County, Hutchinson said. “That’s going to happen across the state, and I don’t think there was a real good plan on how (counties) would cover all of these costs, but it’s not going to be free and if you think about your right to vote, that’s one free thing that you’re born with and we’re going to be paying out the wazoo for it.”

While the Gwinnett County is already using all of the days that the state will now allow counties to use for early voting, the area where the county’s voters can expect to see a change is the new requirements for providing identification to request an absentee ballot.

Requiring the IDs will make elections more secure, according to the secretary of state.

Raffensperger said the ID system is already used in several Republican and Democrat-leaning states, including Virginia, New Jersey and Minnesota.

“I know that the Minnesota Democratic Party loves it (and) their secretary of state, who’s a Democrat, he likes it too,” Raffensperger said. “So, if it’s embraced up there by Democrats, it should be embraced in Georgia by Democrats.”

Another aspect of the bill that has been controversial is the handling of absentee ballot drop boxes. The bill allows drop boxes, but requires they be located inside early voting locations and only be available during the early voting period, which ends the Friday before election day.

That would reduce the number of drop boxes available in Gwinnett. During the general election last year, as well as the Jan. 5 runoff election, the county offered 23 drop box sites but it only had nine early voting sites.

Gwinnett has 595,911 registered voters, according to the latest figures posted on the secretary of state’s website. That means the county would only be able to have about a half-dozen drop boxes for an election.

But, Raffensperger does not believe there will be as big a need for the drop boxes in future elections as there was in 2020.

“We put those in place (through a) State Election Board ruling when I was the chairman, and that was because we were in a pandemic and there was also the issues about the reliability of the United State Postal Service,” Raffensperger said. “We also had about 30% of all voters voting absentee. Since COVID is now dissipating, I don’t believe — and this is just my hunch — we’ll be going back to 6% (the percentage of voters casting absentee ballots before the pandemic), but I don’t think we’ll be at 30%.