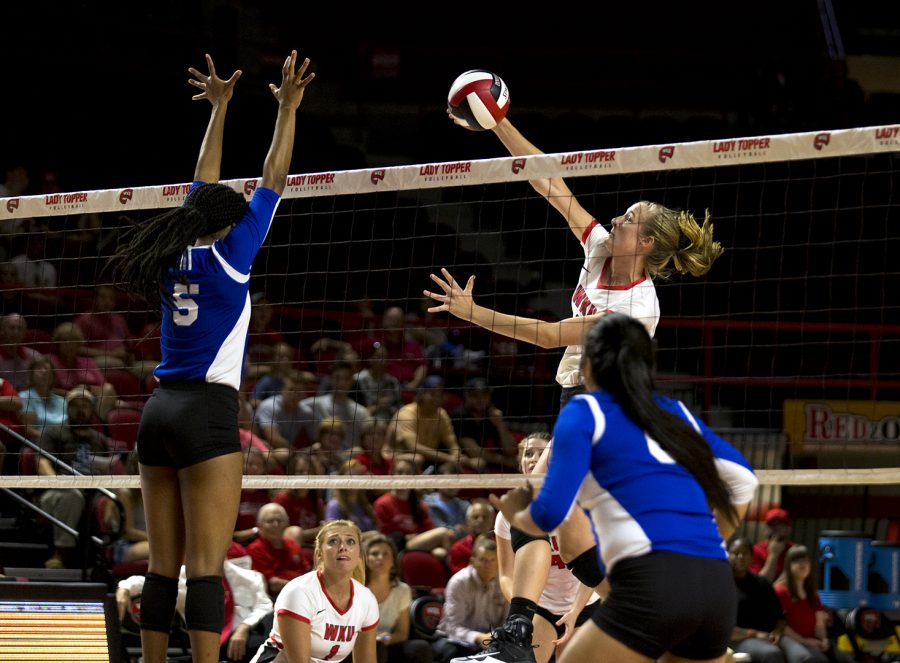 Junior middle hitter Rachel Anderson of Sturgis, Mich. spikes the ball over the net against Tennessee State Tuesday, August 29, 2017 in Diddle Arena. WKU beat TSU with a final score of 3-0.

The case for that statement to be made came in the first two matches of the tournament, in which Louisville handed the Lady Toppers their first loss. Illinois dropped WKU the next morning, giving the team its first pair of back-to-back losses since the opening weekend of the 2014 season.

“We were exposed a bit this weekend,” Hudson said after the tournament. “We have a lot to work on to regroup for this tough road ahead of us.”

Finishing the weekend on a positive note with a 3-0 win over Kent State, the Lady Toppers (6-2) will return home this weekend to host the Holiday Inn University Plaza Invitational, featuring matches against East Tennessee, Pittsburgh and Saint Louis.

East Tennessee State comes to Diddle Arena posting a 2-4 record after overcoming an 0-3 start to pick up a pair of wins in the Appalachian State Invitational.

Defensively for the Buccaneers, junior libero Hailey Aguilar leads the team with 75 digs while sophomore outside hitter Leah Clayton follows up with 55 digs. Junior middle blocker Mariah McPartland has 17 blocks for East Tennessee.

The Lady Toppers will then face Pittsburgh, who comes to the tournament with a 2-3 record after splitting a pair of games in the Dayton Invitational.

WKU wraps up the tournament with a matchup against winless Saint Louis (0-6).

As the young season continues to grow older, the nearly unstoppable trio of Alyssa Cavanaugh, Rachel Anderson and Jessica Lucas continue to keep the Lady Toppers on track for another conference title and perhaps much more.

Cavanaugh, who broke the school record for hitting percentage in a match with a .812 clip against Tennessee State last week, has a team-leading 86 kills on a .352 total hitting clip.

Anderson has followed suit behind Cavanaugh, posting 77 kills and a team-leading .391 hitting percentage.

Upon posting 244 assists (10.61 assists/set) on the young season, Lucas earned Conference USA Setter of the Week honors this weekend, her 13th of the same kind in her Lady Topper career.

Before the season, Travis Hudson exclaimed that depth would be a major part of the Lady Toppers’ run in the 2017 season, and it is indeed showing its face early in the season.

Three of the four WKU freshmen – Hallie Shelton, Darby Music and Kayland Jackson – are all seeing valuable time and production on the court for the Lady Toppers.

Shelton has contributed five service aces on the season, good for second on the team. Three of those aces came in the first set of a 3-0 win over Tennessee State.

Music comes fourth on the team with a total of 37 digs on the season, giving the Lady Topper defense extra depth. Jackson has contributed 33 kills on the season.