Defense proves to be the strength through first two weeks 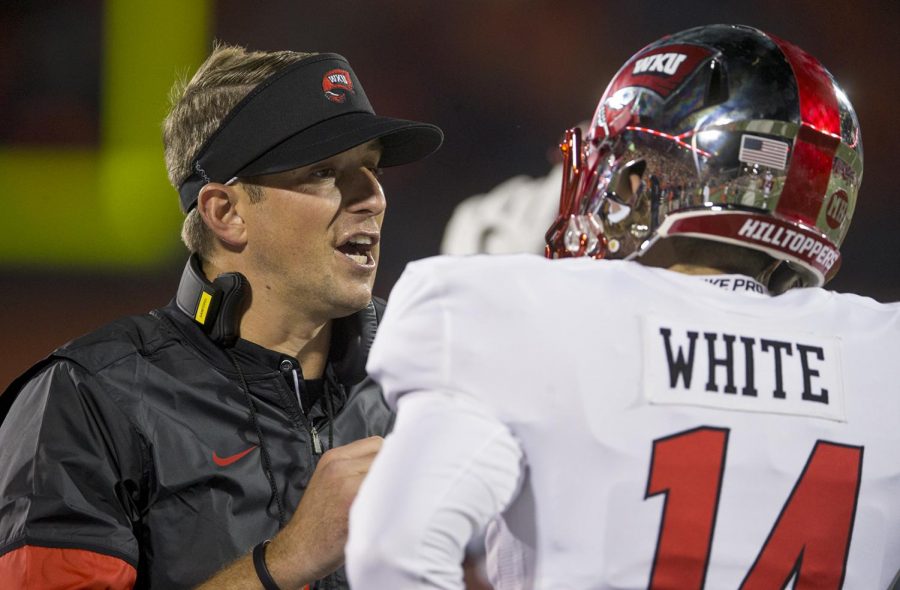 Across the nation, WKU has been infamous for putting up video game numbers on the offensive side of the football for the past few years. Under former head coach Jeff Brohm, the WKU offense finished first in the nation in scoring offense (45.5 points per game) last season while the defense gave up 30 points in a game six different times.

Through two games in 2017, the WKU offense is averaging just 19 PPG including just seven points in Saturday’s loss against Illinois. For the first time in 16 starts under redshirt senior quarterback Mike White, the Hilltopper offense generated less than 10 points.

“It was dissappointing to come out of there without a victory,” first-year head coach Mike Sanford said on Monday. “We truly believed going into that game that we were going to find a way to get a victory. We fell short because of penalties and breakdowns in protection and the running game. The good thing is we have the ability to fix those issues and we need to fix them very quickly.”

White and company may not need to put up over 45 PPG if the program wishes to win its third straight C-USA title. The Hilltopper defense appears much more confident in first-year defensive coordinator Clayton White’s defensive scheme.

In the loss to Illinois, the Hilltopper defense consistently found a way to keep WKU in the game despite its offensive struggles. The first touchdown of the game was a real momentum changer. Right before halftime, Mike White dropped back deep in his own end zone, was pressured and threw the ball across his body and right into the hands of Illinois defender Julian Jones who walked across the goal line for a defensive touchdown.

So, in reality, WKU’s defense gave up just 13 points on the road in Big Ten territory. The Hilltoppers’ only touchdown came after an interception by freshman defensive end Antwon Kincade, giving White and company just a 29-yard gap between themselves and their lone touchdown.

“It’s an offensive and defensive game,” redshirt junior linebacker Joel Iyiegbuniwe said following the loss. “If the offense isn’t doing well, it’s the defense’s job to pick them up and vice versa. We understand that, and we’re not upset about that. We want to help out the offense any way we can.”

The Hilltoppers’ young defense was still able to perform well despite missing three key players due to injury. Neither of WKU’s defensive ends played against the Illini as senior defensive end Derik Overstreet didn’t start for the first time since his freshman season, and junior Carson Jordan was out as well. Senior safety Marcus Ward still has yet to play as he is working his way back to health from an injury dating back to last season.

In Ward’s absence, redshirt freshman Devon Key has stepped in and immediately pleased Sanford. The Lexington native tied for the team lead in total tackles at Illinois with 12 and is second on the team in tackles for the season, trailing only Iyiegbuniwe who leads the team with 21.

“That’s an incredibly improved unit with a lot of first-time starters,” Sanford said about the defense. “What a tremendous surprise Devon Key has been. He’s playing at a high level. Iggy is playing as well as he’s played in his career here. What you’re seeing is coach Clayton White’s system is really a fit for the personnel we have here. There’s a terrific buy-in in terms of effort.”

All three players are expected to be back soon, adding more depth to a secondary that gave up just 107 yards through the air Saturday and just 46 yards to former All-Big Ten second team receiver Mike Dudek.

The secondary as a whole will look to improve after ranking near the bottom of the nation last season and giving up 320 yards through the air against EKU.

“I’d like to see a little more rotation at the safety position,” Sanford said. “That way we keep our guys fresh and because Marcus Ward is as good of a player and leader that we have. Its just a matter of getting him back to full speed.”

The secondary, as well as the entire defensive unit, will face another tough challenge Saturday, Sept. 16 against Louisiana Tech. Despite defeating Lou Holtz’s squad two out of the past three meetings, the Bulldogs have averaged 45.6 PPG in those contests. The game kicks off at 7 p.m. Saturday at Houchens-Smith stadium in a rematch of last year’s C-USA championship.