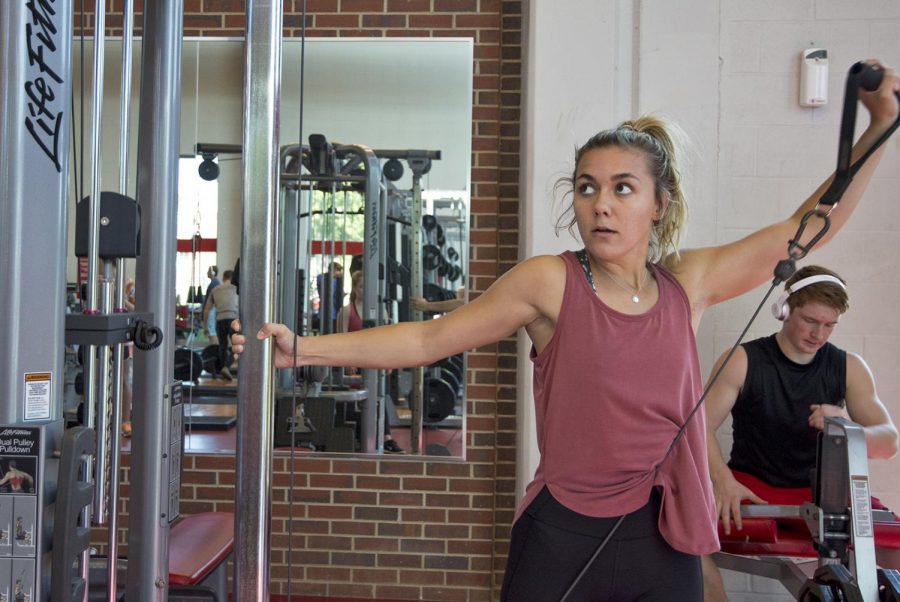 When Sellersburg, Indiana, sophomore Emory Lewis goes to the Preston Center, she doesn’t head straight to the elliptical or the treadmill like many of the other female clients. Instead, she walks straight to the weights, claiming a spot for herself in an area dominated by men.

Lewis said she is often one of the only women in that area, but she said the intimidation she sometimes feels hasn’t stopped her from picking up the weights.

“[Men] think they’re strong, but sometimes they really aren’t,” Lewis said. “Sometimes you can definitely compete with them.”

Women like Lewis are somewhat rare, according to Fitness Magazine. In a study of 12.7 million women who belonged to a health club, only about half used weight machines while less than a third used free weights.

Lewis said she has noticed the gender divide while at Preston. She said she has often gone to lift to find she is the only female in the area. She said being surrounded by men sometimes feels uncomfortable but the feeling never lasts long.

“You think they’re watching you, but they’re never really watching you,” Lewis said. “At least, that’s how I feel.”

Georgetown sophomore Hayley Robb works at Preston as a personal trainer. She said she has also noticed more males in the resistance and weight training area of the fitness center. She said she thinks some women may be intimidated by the predominantly male area.

“Women have just struggled, I think, to feel empowered or welcomed in that environment because it is intimidating,” Robb said.

Robb said stereotypes that men are the stronger gender may turn some women away from strength training. She said other women may worry resistance training will make their muscles bulky.

“You have to really try to train specifically to get that body type,” Robb said.

Lewis said she started lifting in high school when she ran track and has been lifting for six years, but she has never become bulky. She said she never worried about bulking up because she was running when she was lifting and none of her female friends who lift have become bulky either.

“I don’t think [lifting] does that to girls at all,” Lewis said.

Robb said training with weights goes beyond just strengthening the body. She said she has gained a sense of independence and stronger values because she has pushed herself to improve her fitness even if it may seem uncomfortable at first.

“A big part of fitness is getting outside of your comfort zone and pushing yourself,” Robb said.

Robb said anyone, male or female, who is interested in resistance training can contact the Preston Center and set up an appointment with a personal trainer. She said the fitness center also has lab services to teach people how to use the equipment.

Lewis said she enjoys introducing new people to the art of lifting. She said she would encourage other women to lift because it comes with many benefits, such as helping her concentrate in school. She said it has also improved her self-confidence.

“I love being strong,” Lewis said. “It makes me feel better about myself.”