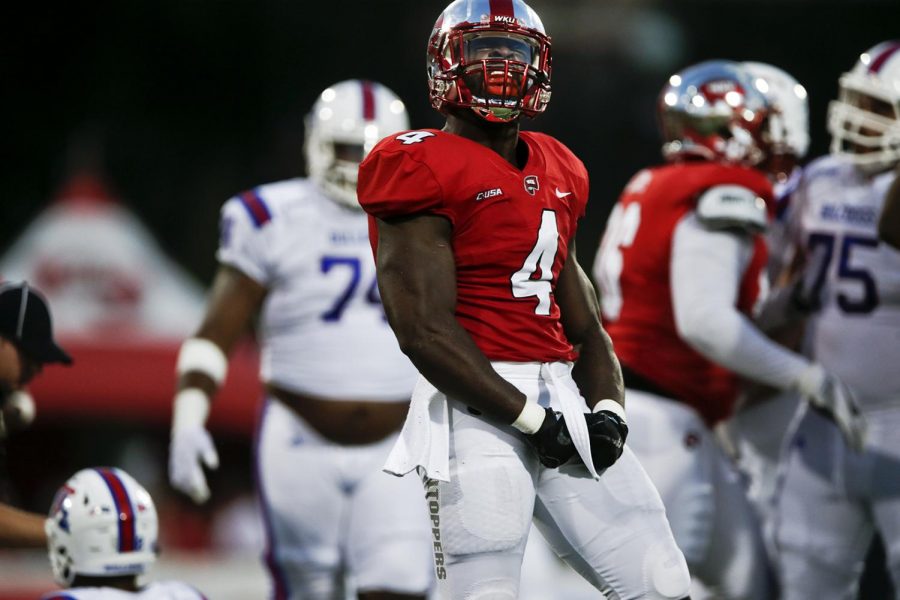 Anthony Winbush, Ball State’s senior pass rusher, leads all FBS players with 6.5 sacks on the young season. He’s also forced three fumbles. The Hilltoppers’ offensive line has struggled at points this season and will have its work cut out for itself in stopping Winbush and the rest of the Cardinals’ defensive front.

Last week, in the Cardinals’ 28-13 win over Tennessee Tech, the Ball State offense turned the ball over three times. WKU’s defense has been a strong point this season, forcing six fumbles despite not recovering any of them. WKU has intercepted the opposing quarterback in each of its last two games, and if Ball State has any chance to beat the Hilltoppers, it will have to avoid costly turnovers.

In last week’s game against Tennessee Tech, the Cardinals allowed the Golden Eagle offense to rush for 116 yards. WKU head coach Mike Sanford said he noticed a step forward in the ground game last week against Louisiana Tech. Usual starter D’Andre Ferby did not play against LA Tech and Quinton Baker is nursing a rib injury, but has not been ruled out against Ball State. With the Hilltoppers’ increased focus on running the football, a weak BSU run defense could be a potential problem for the Cardinals, as well as a huge opportunity for a Hilltopper offense looking to put a lot more points on the board.

The Ball State offense is averaging 466 yards per game this season. The WKU defense, which has given up an average of 357.7 yards per game, will have to find a way to stop the Cardinals. The Cardinals are led by their quarterback, Riley Neal, who has 659 yards and six touchdowns through three games.

Against Tennessee Tech last week, Neal completed 74.2 percent of his passes. Defensively, the Hilltoppers will look to bring that number down closer to Neal’s season average of 67.7 percent. WKU has allowed completion percentages of 60.4, 56.0 and 56.4 for an average of 57.6 percent on the season.

WKU is favored to beat the Cardinals by 7.5 points. Those betting on the Hilltoppers have lost every game this season as WKU lost to Illinois and Louisiana Tech as the favorites, while Eastern Kentucky beat the 39.9 point spread as an underdog in Week 1.

The BSU turnover differential this season is zero. While the Cardinals turned the ball over three times last week and twice more against their previous opponents, their defense has come up big with five takeaways this season. Through three games, WKU has turned the ball over three times, including Mike White’s interception that was returned for a touchdown against Illinois.

Last week, BSU junior running back, James Gilbert rushed for 92 yards on 11 attempts, averaging a whopping 8.4 yards per carry. Louisiana Tech running back, Jarred Craft, averaged a respectable 5.8 yards per carry against the Hilltoppers last week. WKU will need to keep Gilbert in check this week to stop the Cardinals’ offense.

Ball State is 2-1 in the all time series against the Hilltoppers. The last time the two teams played was in 2008, when WKU was coached by David Elson and finished 2-10 as an FBS independent before the Hilltoppers made the move to the Sun Belt Conference in 2009. Ball State, who was ranked 25th in the nation took the victory by a final score of 24-7. Elson is now the Cardinals’ defensive coordinator.