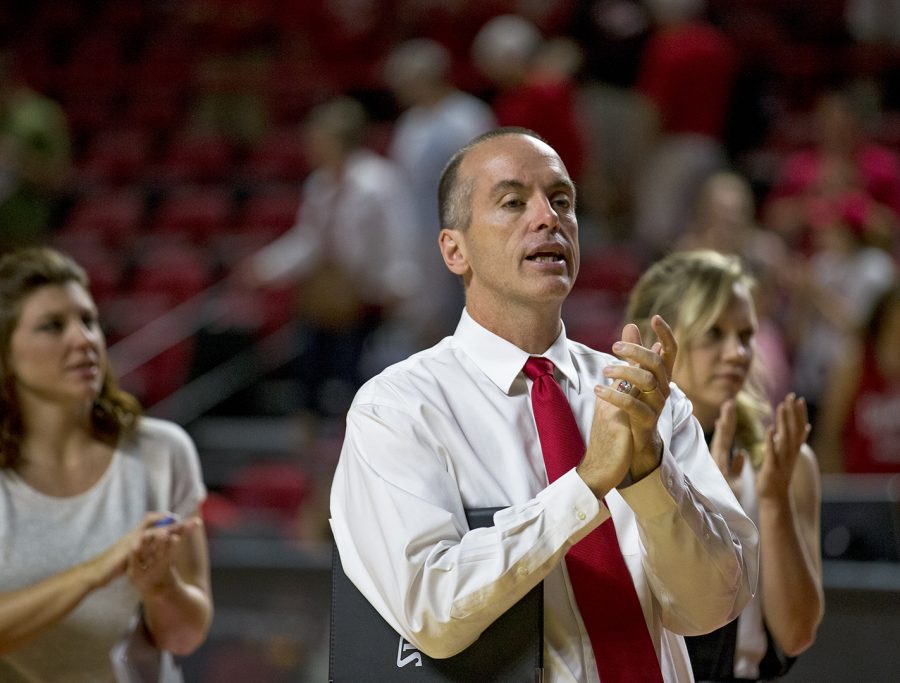 Ever since dropping back-to-back games in Louisville last weekend, the WKU volleyball team has been on a roll and they capped it off with a 3-0 sweep of the Holiday Inn University Plaza Invitational this weekend in Bowling Green.

“I think this weekend is the best that we’ve played collectively as a group,” WKU senior Alyssa Cavanaugh said. “Our defense was amazing, especially in [the Saint Louis] game. They were making pushes and that allows us to have so many opportunities to put balls away.”

“I think we came a long way this weekend in a lot of ways,” WKU head coach Travis Hudson said after the tournament. “I thought today [against Saint Louis] was the most confident we had played. I feel like we’ve been playing with a weight on our shoulders and hopefully last night [against Pittsburgh] lifted it a little bit.”

The Lady Toppers (9-2) began the weekend with the 3-1 victory over East Tennessee State after the match was knotted at 1-1 at one point.

Jessica Lucas recorded her third double-double of the season against the Buccaneers, tallying 44 assists, 10 digs, and seven kills to go along with two blocks and two aces. Cavanaugh led the team with 22 kills on a .526 hitting clip while Rachel Anderson added nine kills.

The night cap against Pittsburgh highlighted the weekend, as the Lady Toppers pulled out a 3-2 win in a barnburner over the Lady Panthers in front of a deafening Hilltopper fan base.

“It was absolutely awesome,” Hudson said of the crowd. “It’s what you live for as a coach to have the fans into it like they were. Our team really fed off of that atmosphere.”

The Lady Toppers threw a block party against the Lady Panthers, tallying 22 total as a team including Listenbee’s 10. All Lady Toppers that played on the front row in the match had at least one block, four players recording a minimum of four blocks.

“We inserted Amara in the lineup and she was big for us from a defensive standpoint,” Hudson said. “Pittsburgh is such a good team that you have to find a way to get stops, and we did that tonight.”

Emma Kowalkowski led the Lady Toppers with 12 digs while Sydney Engle tallied 11 of her own.

Offensively, Cavanaugh once again led the charge with 19 kills, followed by nine apiece from Anderson and Engle. Lucas tallied 46 assists.

WKU wrapped up the weekend with a Saturday sweep of Saint Louis, 3-0.

Lucas posted 36 assists and three kills on the evening while also adding six digs, the sixth of which put her at 1,000 digs for her career.

Kowalkowski led the WKU defense with 13 digs while Engle contributed 10. The Lady Toppers posted 8.5 blocks as they finished with 40.5 total across the three weekend matches.

After the weekend was set in stone, Cavanaugh thanked the fan base for powering WKU in the weekend sweep.

“We love playing on our home floor,” Cavanaugh said. “Having all of the fans, teams, and little kids here means a lot to us. We will take that energy from this weekend and keep moving forward.”

With the weekend tournament in the books, WKU will not return to Diddle Arena until a Friday, Sept. 29 matchup against conference rival Louisiana Tech.

The Lady Toppers will travel back to Nashville on Tuesday to take on Lipscomb at 6:30 p.m. CT, followed by a trip to Columbus, Ohio for the Buckeye Invitational at Ohio State University, after which a six day break will lead WKU into conference play on Sept. 22.