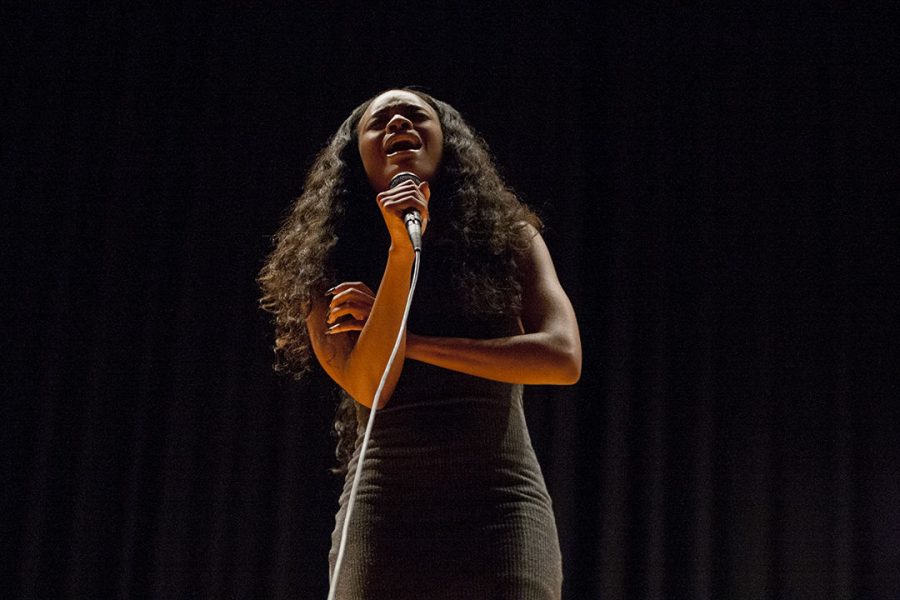 Sophomore Tyler Adams of St. Louis, Mo. performs a cover of Alicia Keys’s “If I Ain’t Got You” during the Major Madness Talent Show auditions on Sept. 20, 2017. Adams started performing in her church at age 7 and has continued to perform at various events throughout her life. When it comes to performance, Adams says, “everybody gets butterflies, but once I get on stage…everything goes away and it’s just me singing.”

The Major Redz will be hosting a talent show next Wednesday at 7 p.m. in DSU 1071.

The Major Redz are a student organization, and according to their Facebook page, they work to inspire diversity in school entertainment. They often attend the football games, where they can be seen dancing next to the band section.

“This is our way of gaining some respect and building on our name as the Major Redz – doing more than just dancing in the stands and having an actual event that’s ours that we coordinated ourselves,” Louisville senior Brittany Perry said at a talent show practice on Sept. 21.

This is the 3rd annual talent show hosted by the dance team, Evansville, Indiana senior Jessica Jackson said. Since the Major Redz aren’t sponsored by the school, the aim of the talent show is to raise money for various components, such as uniforms, membership expenses and various other costs, members said. They also said they are hoping for the show to sell out this year like it did for their 2015 show.

“You usually know all about a person’s major or career, but very rarely you see their hidden talents, for example, singing or dancing,” Jackson said.

While the show isn’t as diverse as the group said they would like, it does bring the multi-ethnic communities on campus into the spotlight. The talents range from singing, dancing, acoustic guitars, original spoken word and more. Between acts, there will be dance competitions, a DJ and even dances performed by the Major Redz themselves. Not only will the students perform, but they’ll also compete to win a cash prize, the amount of which is determined by ticket sales.

The Major Redz invite students to help support them and have fun. Pre-sale tickets are $3, while tickets at the door are $5.