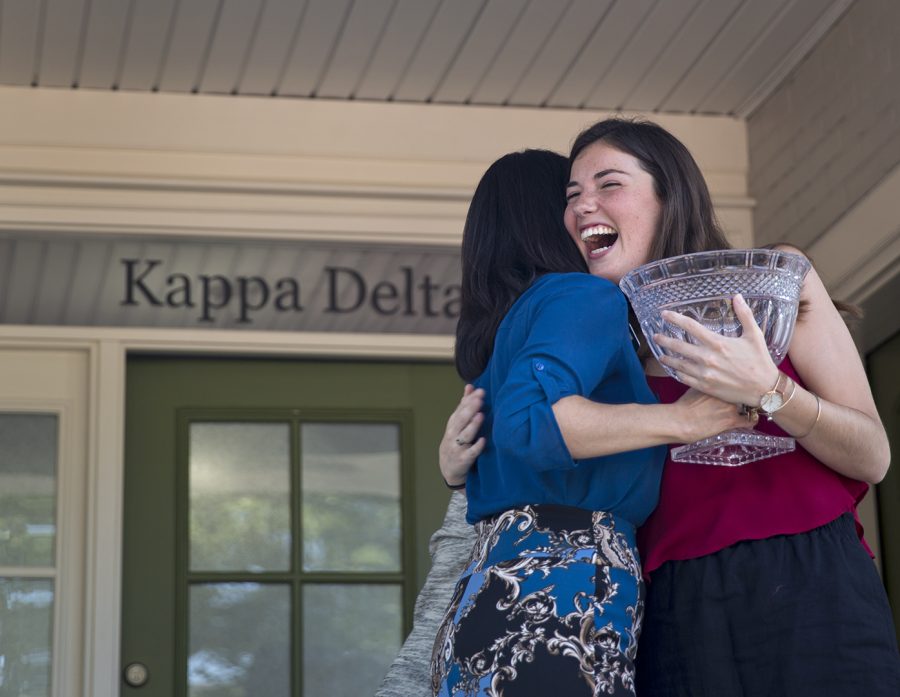 Anne Thomas Belcher accepts the Council Award from Kappa Delta’s president, Tricia Spence Saturday, Sept. 23. “You don’t realize when you are making your reports, communicating with nationals and working with your fellow council officers that this award would be the result of all that hard work,” Belcher said. “It’s something that I’ll never forget and something that I’ll cherish being chapter president of Delta Gamma chapter.”

The Delta Gamma chapter of Kappa Delta was announced as the winner of the 2017 Council Award on July 1 at the sorority’s Biennial National Convention in Phoenix, Arizona. The award is given to the collegiate chapter with the most outstanding performance in academics, community service, operations, recruitment and sisterhood throughout the past two years, according to a press release from WKU.

Senior Anne Thomas Belcher, the chapter’s president, was presented with the award at the national convention. She said she stood in shock at the convention, listening as her chapter was announced as the winner.

“It was such an honor,” Belcher said after the presentation.

Tricia Ruma Spence, Kappa Delta national president, presented Belcher and the other members with the award, a large crystal bowl.

Spence said there are currently 165 Kappa Delta chapters with 17,000 collegiate members participating every year. She said the Council Award is presented to the chapter that best represents the Kappa Delta ideals.

The Delta Gamma chapter, which began 52 years ago, has won the award twice, first in 1991, according to Spence.

“That in itself is a really big deal,” Spence said. “Very few chapters have won it once, to say nothing for winning it twice.”

Spence said winning the Council Award would not be possible without support from WKU, volunteers and members of the chapter advisory board. She said winning the award shows the dedication members have to the goals of Kappa Delta.

Caboni, a former Phi Kappa Psi member at Louisiana State University, praised both Kappa Delta and other Greek organizations for helping transform lives, which he said is something WKU seeks to do for all students.

“Those are things that are the result of outstanding leadership,” Rash said.

“I’m not sure there’s going to be a better Kappa Delta moment in my life than that one,” Stockton said.

Charley Pride, director of student activities, said winning a chapter’s highest award is an honor for a Greek organization. He said other campus chapters that have also won their chapter’s most prestigious award include Alpha Omicron Pi, Phi Gamma Delta and Phi Delta Theta.

Bowling Green senior and Kappa Delta member Rachel Garden said winning the award was a surprise. Garden said the chapter did not change any of their standards to try to win the award.

“We hold ourselves to a higher standard, always,” Garden said as she sat in front of the Kappa Delta house on Saturday.

“It’s always been our same hard work,” Faught said, sitting next to Garden after the ceremony.

The Delta Gamma chapter also won the Patricia Beecham Nieman Joint Shamrock Event Award for their philanthropic activities to raise money to prevent child abuse, the Financial Responsibility Award and the Judy Hare Thorne Angelos Award for their social media presence and monthly magazine. The chapter was also named a Merit Chapter, which is given to the top 10 percent of Kappa Delta chapters.