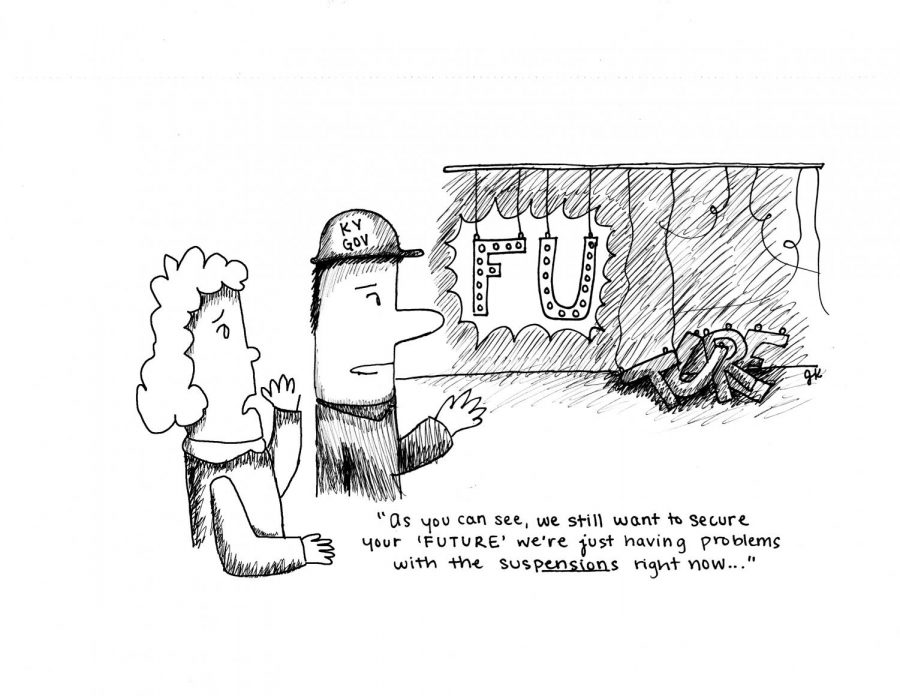 In the midst of a state-wide pension crisis, WKU is looking at how potential changes to the pension system may affect employees, according to university administrators.

In an email sent to all faculty and staff, President Timothy Caboni said “we must recognize that some change is likely inevitable, and it is better for us to engage proactively in a conversation with policy-makers as they wrestle with these very complex issues rather than waiting for them to make their decisions.”

“To that end, representatives from the six public universities and the KCTCS system whose employees are impacted by changes to the pension systems have been working on a set of principles that we agree are in the best interests of our institutions and our employees,” Caboni said. “The collective position advocates for no change for current employees.”

According to the email, this may mean that all new hires will be using a “403(b) type defined contribution plan, which is consistent with what many public universities … currently offer.”

According to Time Money, 403(b) retirement plans are typically offered to “employees of public education entities and most other nonprofit organizations. For the most part, they work the same as 401(k)s.”

Ann Mead, senior vice president of finance and administration, said moving to a 403(b) plan will set WKU’s contributions to individual’s retirements plans “as a percentage of salary.”

“It allows us to fix a contribution rate that we will know is sustainable,” Mead said.

Mead said university contribution rates could double in the next year, but that not much information has been available yet about what may actually occur.

Mead said under a 403(b) plan, the “employee chooses how it will be invested,” and added, “It’s very employee directed.”

Caboni also said “our highest priority is protecting those employees who are close to retirement from changes for which they have insufficient time to plan,” and WKU “will be steadfast in this position on behalf of our employees.”

Caboni also wrote about the Kentucky Employees Retirement System and Kentucky Teachers’ Retirement System, saying “the current situation … is unsustainable.” Caboni said because of rising percentages universities contribute to retirement programs, other areas on campus, including “tuition revenue and state appropriations,” are going toward contributions to pension.

“Without substantive reform, we soon may find ourselves in the untenable position of cutting campus budgets to cover our pension obligations,” Caboni said. “Further, we should not balance the state pension systems on the backs of parents and students who already already are shouldering the majority of the burden of their public higher education costs.”

“Ultimately, any changes made to the existing pension systems will be decided in the legislative process,” Caboni said. “This important conversation will be ongoing, and our collective cooperation and communication will be important as we work toward an outcome that ensures a sustainable path forward for all.”

The report, done by the PFM Group, recommended several drastic changes to the current pension system, including increasing the retirement age to 65 for many workers and significantly reducing the amount that current retirees receive.

Tony Glisson, director of human resources at WKU, said Kentucky’s pension crisis is “one of the worst across the country,” and said he was concerned as a participant in the pension system himself.

Glisson noted the report that concerned many participants in the pension system that was released earlier this year contains only recommendations. However, Glisson said the report is “drastic and includes pretty significant things.”

“It’s important, also to note, that this is only a consultant’s report, and it’s not cast in stone. It’s not exactly what’s going to occur,” Glisson said.

The website also says by 2022, the Kentucky Employees Retirement System – Hazardous Duty Coverage will run “completely out of money.”

“I think we all know that the pension is in trouble here in Kentucky,” Bevin said in a video posted to the Kentucky Pension website. “Especially in certain … plans, frankly to all of them, but to varying degrees, run the risk of becoming insolvent, and if they were to become insolvent, the checks literally would not come. That’s a very real risk.”

A special legislative system will be held in October or November to look at making official changes to the state-wide pension plan for state and local government employees, including teachers and university employees.

Bevin added the government has a “legal and moral obligation” to those who will draw pension, and they “intend to meet that” obligation.

Glisson said WKU was looking to possibly work with other state universities, since “we likely have common issues, common problems and they can be likely addressed with common problems.”

“We believe that conversation around some ideas that would be mutually beneficial and it could be applicable across all of us would seem to be appropriate and probably be more persuasive,” Glisson said.

Glisson said some conversation has already occurred with other state universities, and will continue as more information becomes known, adding “we know that probably some change has to occur.”

“What that change looks like and how that could benefit our respective faculty and staff, that’s really the question to be answered,” Glisson said.