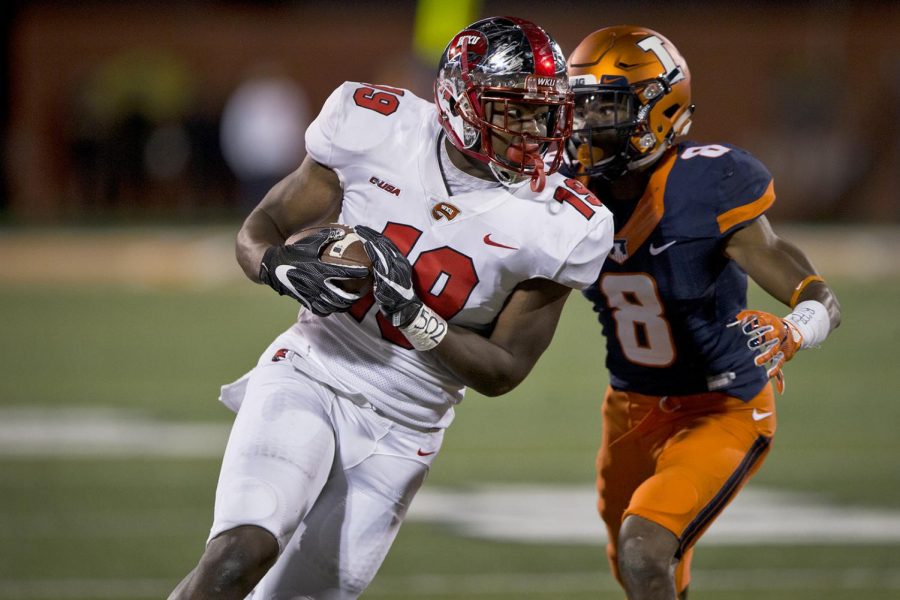 WKU freshman C.J. Marria (19) runs the ball while being chased by University of Illinois freshman Tony Adams (6) during WKU's game against Illinois on Saturday.

Saturday night’s road matchup against Illinois will be a game head coach Mike Sanford and company will want to put behind them. The Hilltoppers fell to Illinois 20-7 in one of the more nightmarish offensive nights in recent WKU memory.

The seven total points scored is the lowest single-game margin for WKU since being shut out 35-0 at Alabama in 2012, and is the lowest margin since redshirt senior quarterback Mike White took over the reigns quarterback.

The running game netted just six total yards while White turned it over twice. Senior wide receiver Nacarius Fant caught a career high 10 passes for 110 yards, but it wasn’t enough as the WKU offense didn’t find the end zone until the 4th quarter.

“Our number one goal was to come in here and win,” Fant said. “We wanted it to be the first win over a Big Ten team in school history. What I did obviously wasn’t enough. There’s just a lot of things we need to fix going into next week against Louisiana Tech.”

Both teams went three-and-out on their opening possession. After the Hilltoppers went three-and-out on their second possession, redshirt junior punter Jake Collins kicked just a 10 yard punt, giving Illinois excellent field position at the WKU 36-yard line to begin their second drive. The WKU defense held their own and Illinois settled for a Chase McLaughlin 37-yard field goal to put the first points on the board.

On the ensuing possession, White drove WKU down to the Illinois 26-yard line. Facing fourth and four, Sanford elected to go for it instead of settling for the tie. White found redshirt sophomore wide receiver Lucky Jackson, but the Lexington native was just a hair short, giving the ball back to the Fighting Illini.

“Those are situations where we would’ve had a chance to take the lead,” Sanford said about the fourth down gamble. “But that’s a defense thats going to make you earn everything. They’re not a defense that gives up a ton of big plays and that was no exception.”

After the two teams traded punts, Illinois quarterback Chayce Crouch drove Illinois down to the Hilltopper two-yard line. However, the WKU defense stuffed the Fighting Illini and forced another field goal to keep it a one-possession game. After the Hilltoppers went three-and-out on consecutive drives, Illinois drove to the Hilltopper 36 before the defense forced a fourth and four. Illinois punter Blake Hayes pinned WKU at their own four-yard line, setting arguably the biggest play of the game.

Facing second and 12 with his back against his own end zone, White threw up a pass that landed right in the hands of Illinois linebacker Julian Jones. Jones jogged 10 yards untouched into the end zone for the game’s first touchdown to give Illinois a 13-0 lead. White finished the game 28-43 for 238 yards and one interception.

“I decided to take a shot. By the time I dropped back I was in the back of the end zone and I tried to get it out of bounds,” White said. “I couldn’t plant my feet and turn my hips enough. It was just a bad football play.”

On the ensuing possession, White found Fant twice for 27 yards. A targeting penalty and a late hit penalty followed each catch, and all of a sudden WKU found themselves at the Illinois 12 yard line with 1:03 to play in the first half. Illinois defensive end Bobby Roundtree sacked White on the following play, forcing a fumble that was recovered by Illinois’s Jamal Milan. For the first time since 2015 at Vanderbilt, WKU entered the half scoreless.

“We’re losing some one-on-one match ups right now,” Sanford said about the offensive line. “There’s too much pressure for Mike to get comfortable, and it wasn’t really generated by blitz. But I trust those guys, and I know Mike trusts those guys. We just have to get back to our technique.”

Illinois received the ball first in the second half, and Crouch drove the Fighting Illini 84 yards in 15 plays for the game’s first offensive touchdown. Neither team put up points on the board the rest of the third quarter as WKU trailed Illinois 20-0.

With the offense unable to find success, the WKU defense finally came up with a big play. Freshman defensive end Antwon Kincade picked off Crouch and returned it to the Illinois 29-yard line. Six plays later, White ran it in from two yards out on a read option to cut the Illinois lead to 13 points with 11:38 left to play in the game. However, Crouch engineered a 10-play, 52-yard drive that milked 7:04 off the clock. The drive ended with a punt and pinned WKU at their own 14-yard line with one last chance. After one first down, the Hilltopper offense turned it over on downs and Illinois held on for a 20-7 victory.

“I’m proud of our effort, especially our defensive effort,” Sanford said. “It was a disappointing offensive performance. We have to dig deep and figure out what we could’ve done better to put our players in better positions to be successful. We all shared the burden of losing tonight from a team standpoint.”

The loss drops WKU to 1-1. The Hilltoppers are back at home next week against Louisiana Tech in a rematch of last year’s Conference USA Championship game. The Bulldogs are 1-1 and fell to Mississippi State 57-21 on Saturday.