‘The 1619 Project’ Docuseries Will Debut on Hulu 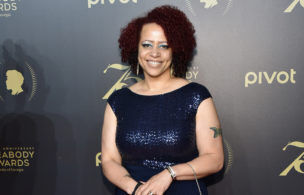 ‘The 1619 Project’ Docuseries Will Debut on Hulu

A documentary series based on The New York Times Magazine and staff writer Nikole Hannah-Jones’ (above) The 1619 Project is coming to Hulu.

The impactful and thought-provoking work of journalism was printed in the NYT in August 2019, on the 400th anniversary of the first enslaved Africans in the English colonies that became the U.S. It connected slavery in U.S. history with the systemic racism in America today, and detailed how the legacy of slavery has shaped parts of society including music, law, education, and the arts.

See AlsoIn a Triumphant Oprah Interview, Meghan and Harry Finally Speak Out
In a probing, open discussion, Oprah shows again why she’s a master of the craft.

“The 1619 Project is an essential reframing of American history. Our most cherished ideals and achievements cannot be understood without acknowledging both systemic racism and the contributions of Black Americans. And this isn’t just about the past — Black people are still fighting against both the legacy of this racism and its current incarnation,” said Roger Ross Williams (below), who will direct the first episode and produce the series under his One Story Up production banner, in a statement. (His producing partner and co-executive producer is iGeoff Martz in collaboration with Lionsgate Television, The New York Times, and Oprah Winfrey’s Harpo Films.)

“I could not ask for a more gifted and committed storyteller to entrust The 1619 Project to than Roger Ross Williams,” added Hannah-Jones. “I have long admired the impact and authenticity of his filmmaking, and the fact that we’re working with Disney and Hulu aligns with our vision of partnering with the world’s greatest Black storytellers to bring this project to a global audience.”

Peabody Award-winning journalist Shoshana Guy will serve as showrunner. Kathleen Lingo, editorial director for film and TV at The New York Times, will executive produce for The Times. Winfrey, Lionsgate, and The New York Times first announced their partnership to develop The 1619 Project into a portfolio of movies, TV shows, and other content in July 2020.