Hilltoppers fail to close out Louisiana Tech at home 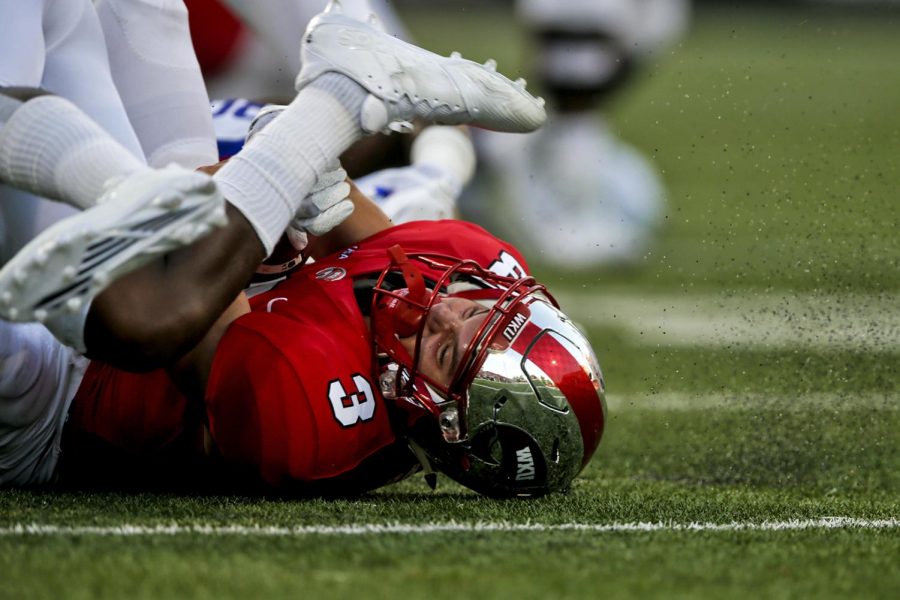 Western Kentucky University running back Quinton Baker (3) is tackled to the ground during the Hilltoppers' 22-23 loss to Louisiana Tech University on Saturday September 16, 2017 at L.T. Smith Stadium.

WKU hosted Louisiana Tech on Saturday night in a rematch of the 2016 C-USA Championship game. Both teams entered the game 1-1, meaning one of the C-USA powerhouses would enter Week 4 with a losing record.

“These ones hurt, they hurt a lot,” redshirt junior linebacker Joel Iyiegbuniwe said following the game. “Everyone is upset about it. We just have to get better at finishing games. Simple as that.”

Neither offense found success on its first drive. After LA Tech punted through the back of the end zone, redshirt senior quarterback Mike White engineered an 11- play, 80-yard drive, capping it off himself with a 4-yard touchdown run, his second of the season. Following the touchdown, redshirt senior tight end Deon Yelder took a direct snap and plunged his way into the endzone for a 2-point conversion to give WKU an early 8-0 lead.

LA Tech quarterback J’Mar Smith answered with an 11-play drive himself, but the Bulldogs were forced to settle for a field goal after the Hilltopper defense stopped them at the 15-yard line.

White and company went back to work again. The Hilltopper offense drove 73 yards in 10 plays as sophomore running back Quinton Baker punched it in from 3 yards out for his first touchdown of the season to make the score 15-3 with 11:29 to play in the second quarter. Baker finished the game with 82 yards and one touchdown on 19 carries.

“Run game and tempo was the name of the game in the first three quarters,” Sanford said. “I thought when we got our tempo going, you saw a LA Tech team that was playing on their heels. I thought our offensive line played significantly better against a good front.”

The WKU defense forced another LA Tech punt and White and company looked to make it a three-possession game. After a Yelder first down catch, the Hilltoppers were forced to punt and pinned the Bulldogs at their own 10 yard line, setting up the biggest offensive play of the day for LA Tech.

After a 3-yard run, LA Tech wide receiver Rhashid Bonnette found his way past the WKU secondary and Smith hit him in stride for an 87-yard catch and run to cut the lead to 15-10. Smith finished the game with 306 passing yards and a touchdown.

“I thought he played well, he put some balls on the money,” Sanford said about Smith. “He’s a competitor and has got a lot of arm talent.”

After the Hilltoppers punted again, Smith drove the Bulldogs down for a 36-yard field goal right before the half to cut the lead to two points.

Holding onto a 15-13 third quarter lead, the Hilltoppers found a spark from an unlikely player. On his first carry of the 2017 season, true freshman running back Jakairi Moses took the ball outside the left hash and ran 19 yards for a touchdown to give WKU a 22-13 advantage that they would take into the fourth quarter.

After Smith and company answered to make the score 22-20, the LA Tech defense forced a punt, giving the ball back to the Bulldogs for what appeared to be the last drive of the game.

On second and five, Smith threw a deep pass that was intercepted by senior defensive back Joe Brown with 3:31 left in the game.

However, White and company went three-and-out and gave LA Tech one last chance with 1:55 to play. Smith drove the Bulldogs near the Hilltopper goal line, setting up Barnes’ final dagger.

The Hilltoppers are back at home next week against Ball State (2-1) who is coming off a 28-13 victory over Tennessee Tech. The Hilltoppers have a losing record in the regular season for the first time since the 2014 season.

“We’re going to fight, and we’re going get back to work because I know Ball State isn’t going to feel sorry for us,” Sanford said. “It’s going to be a big game going into the bye week. We have to put this one behind us and learn from it.”